TOTOO BA: Glutathione drips is not safe for skin whitening? 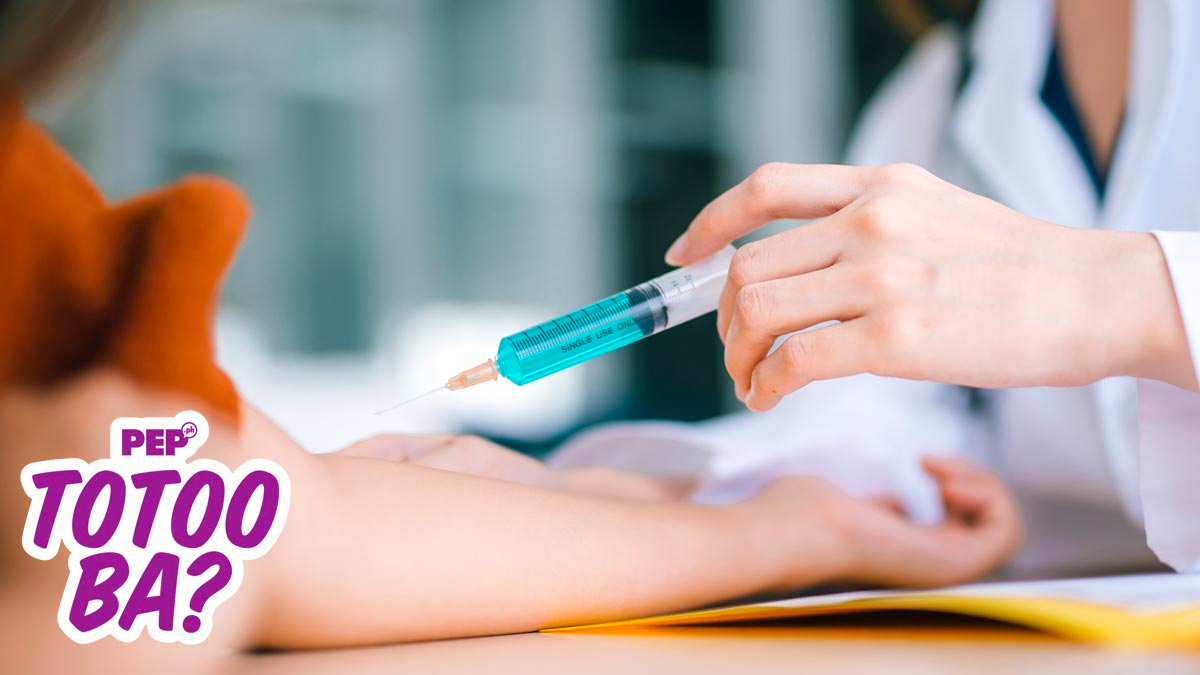 "FDA warns against the use of injectable glutathione as a skin whitener..." says Dr. Eleonor B. Asuncion of Philippine Dermatological Society.
PHOTO/S: iStock

Of late, glutathione drip has become a popular skin-whitening treatment.

Although it has been getting fairly good reviews from those who have tried it, many people are still skeptical about its effect on the overall health.

Before giving it a try, PEP.ph (Philippine Entertainment Portal) asks Dr. Eleonor B. Asuncion of the Philippine Dermatological Society about the real deal on this treatment believed to work with just one session.

WHAT ARE GLUTA DRIPS?

Contrary to popular belief, glutathione is, first and foremost, a molecule found inside the cells.

Dr. Asuncion expounds, "Glutathione is produced inside our cells and functions as an important antioxidant for metabolism and body regulation.

"It is a molecule composed of three amino acids (glutamine, cysteine, and glycine)."

Outside our bodies, glutathione can also be "man-made as glutathione-containing products (topical, oral, inhaled and injectable formulations)."

Among these formulated glutathione products are the glutathione intravenous (IV) drips that contain "high dose glutathione, antioxidants, and amino acids."

She adds, "Drip contents are infused slowly through a mixture of dextrose or saline solution."

HOW DOES GLUTA DRIPS WHITEN THE SKIN?

Dr. Asuncion underlines that the primary purpose of glutathione is to "protect cancer patients from nerve side effects of platinum-based chemotherapy."

And here's the thing—the whitening is only one of its side effects.

According to the dermatologist, glutathione interferes with the production of melanin or the pigment that gives color to the skin.

The drug does this in two ways: one is by repressing the production of tyrosinase or "the key enzyme for production of melanin" and two, by shifting "eumelanin (darker melanin) to a lighter phaeomelanin (yellow melanin)."

As a skin-whitening treatment, gluta drips do not have the endorsement of the Philippine Food and Drug Administration (FDA).

According to Dr. Asuncion, it is approved only as a drug for cancer patients, but is not to be used for cosmetic treatments because of its possible dangerous effects on its users.

She elaborates, "Injectable glutathione has only been approved by FDA as a drug to protect cancer patients from nerve side effects of platinum-based chemotherapy.

"FDA warns against the use of injectable glutathione as a skin whitener because whitening is not an approved use, efficacy is not well established and there have been reported side effects.

"The unapproved use of IV glutathione administered for skin lightening at very high doses is unsafe and may result in serious consequences to the users."

And these side effects do not jsut target the skin, but the other organs as well.

It can be life-threatening, according to most studies done worldwide.

Dr. Asuncion continues, "IV Glutathione has been associated with adverse events not only in the Philippines, but worldwide as reported by the Uppsala Monitoring Center (WHO international database of suspected adverse drug reactions).

"On local studies that used IV glutathione for skin lightening, the most severe systemic adverse effect is acute renal failure after three years of weekly IV glutathione in one patient.

"Gastritis or gastric discomfort is the most common glutathione IV reaction.

"In a recent study among Pakistani women (aged 24-47 years) given 1200mg IV glutathione injected twice weekly for 6 weeks, the most severe reported reaction was anaphylactic shock, which is a life-threatening hypersensitivity reaction."

In case you experience complications after a treatment, Dr. Asuncion recommends that you seek medical help immediately.

"Urgent medical management should be administered if adverse effects occur.

The Philippine Dermatological Society (PDS) has been working with FDA in ruling out the use of glutathione drips for cosmetic purposes.

The organization has been doing this through public advisories stressing the fact that "IV glutathione is not a standard drug for skin lightening."

In addition to that, Dr. Asuncion says that PDS "is also currently undergoing scientific investigations regarding its effects on skin pigmentation."

Meanwhile, the dermatologist suggests that you double-check the legitimacy of each skin product or treatment you are about to try.

One way of doing it is by verifying if it is FDA-approved.

"The public is advised to be cautious of any marketed product for treating skin conditions (i.e skin lightening) and is strongly warned to refrain from using glutathione products that are not FDA-approved and used outside the doses approved by the FDA.

"Consumers can check the registration of any health product with the FDA by visiting www.fda.gov.ph," says Dr. Asuncion.

Another way is by consulting only the licensed dermatologists.

"One should always consult a board-certified dermatologist, a member of the Philippine Dermatological Society, regarding evidenced-based and safe skin lightening treatment options."

Lastly, Dr. Asuncion suggests that you also report any experienced glutathione-related side effects to PDS and FDA at suspected_adverse_reactions@yahoo.com or www.fda.gov.ph/adr-report-new.