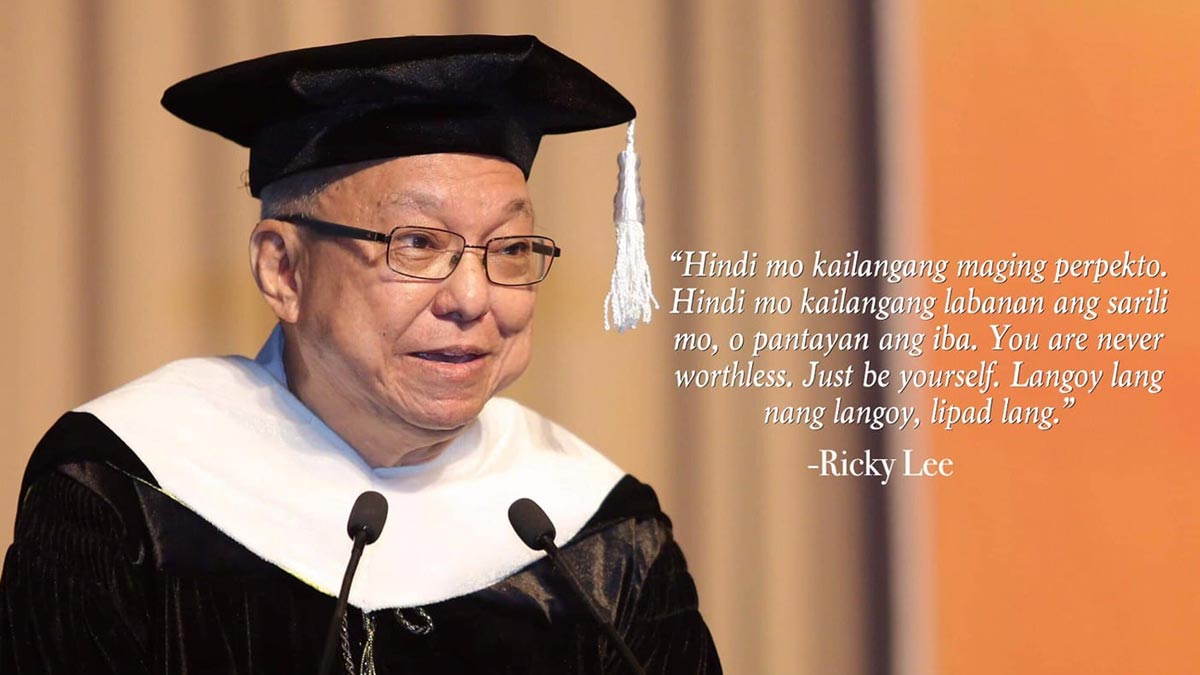 Ricardo "Ricky" Lee has been leading a wholly fulfilling life as screenwriter and playwright.

And although he has shown no signs of slowing down at 72, it is understandable that he has stopped believing that life still has more in store for him, least of all a surprise.

After all, he has been there, done that, and has also been richly rewarded for his dedication to his craft.

Imagine his disbelief when, at his age, Ricky Lee finally achieved his long-held dream of obtaining a degree from a school of learning.

The award-winning screenwriter did not finish his college education, but last Wednesday, May 8, Ricky went up the stage at the commencement exercises of the Polytechnic University of the Philippines (P.U.P.) to receive the honorary degree of Doctorate in Humanities.

Ricky, without any earned degree, has written over 170 screenplays and documentaries since 1979.

He has also received more than 50 awards and recognitions for many of his works, among which were the best-known and critically acclaimed films Jaguar (1979), Himala (1982), and Moral (1982).

The speech he delivered before the assembled faculty and graduates after receiving his award was an inspiring piece that recalled the lessons he learned throughout his four-decade long writing career in the movie industry.

(PEPsters: Read the speech at the end of the story. It is a gem.)

Ricky told PEP.ph (Philippine Entertainment Portal) that he was able to finish the speech on his way to New York City last April.

"And then, in New York, pinolish ko and then I finished the first drafts nang sinusulat ko ang dalawang scripts."

PEP.ph interviewed Ricky over the phone on Thursday night, May 9. During that brief chat, he recounted how the plum award of an honoris causa from a university dropped on his lap from out of the blue.

It just so happened that he launched his third novel titled Bahay Ni Marta at the Claro M. Recto Hall of P.U.P.

Afterwards, he was approached by the officials of the university to bring up the idea of giving him an honorary degree in recognition of his body of work in the fields of film and dramatic arts.

"And I think they went through the process hanggang mapa-approve sa board of regents, and then napa-approve sa CHED [Commission on Higher Education].

Ricky's closest friends and family were present to witness his latest milestone. Among them were his son Kiko, his best friends Chanda Romero and director Rahyan Carlos, and his assistants Jerry and Ram.

Ricky had always wanted a college education, and he pursued it relentlessly even when life kept throwing hindrances in his path until he gave up.

Armed only with his passion for learning and writing, Ricky left his hometown in Daet, Camarines Norte, along with four of his friends to pursue their dream of finishing college.

The first few years in Manila were tough for Ricky and his friends.

During their first year in Manila, Ricky and one of this friends were hired as waiters by a pizza parlor, while their three other companions found work in an umbrella factory.

When his friends decided to return to their hometown, Ricky moved to an apartment that he shared with a couple who also hailed fom Bicol.

After saving up some money, he was able to enroll at the Lyceum of the Philippines University in Intramurous to take up Journalism.

Ricky had to juggle several jobs in order to finance his studies.

In his interview with PEP.ph, Ricky said this happened in the late '60s.

He was forced to drop out of school when he collapsed from exhaustion after barely a month of studying and working at the same time.

However, Ricky eventually received another opportunity to study in college—this time, as a working scholar taking up AB English at the University of the Philippines in Diliman, Quezon City.

But then martial law was declared in the country, tripping Ricky's plan for a college education once again.

While still at U.P., Ricky became a staff writer for the Philippines Free Press. He also joined the national democratic writers' organization called PAKSA (Pen for the People's Progress).

His reportage leaned heavily toward political activism, and when the country was put under martial law in 1972, Ricky went underground "full-time."

He was hounded by the military as a fugitive along with many other members of the press—including fellow political activists Pete Lacaba, Jose Dalisay, and PEP.ph Editor-in-Chief Jo-Ann Maglipon.

In 1974, Ricky was captured at his apartment in Sta. Mesa, Manila. He was imprisoned and tortured within an inch of his life.

Mercifully, he was set free after close to a year in prison.

Without any job prospect—broadcast and print media were all government-controlled—Ricky turned to screenwriting and fiction writing.

In 1979, he worked with the late film director Gil Portes on the documentary Pabonggahan that featured performers critical of the Ferdinand Marcos regime—Pepe Smith, Juan dela Cruz, and Sampaguita, among others.

In the same year, he co-wrote with Pete Lacaba the screenplay for the film Jaguar, which was based on a long essay written by the late National Artist for Literature Nick Joaquin.

The movie was directed by the renowned filmmaker Lino Brocka, who, after his death in 1991, was also given the rank and title of National Artist.

Jaguar won many awards from the local film industry and was nominated for the Palm d'Or award at the Cannes Film Festival.

The movie dramatically altered the course of his writing life. It elevated him to the major league in the film industry.

NOT JUST ANOTHER AWARD

For someone used to getting accolades and awards, Ricky Lee felt somewhat at a loss upon receiving his Doctorate in Humanities Honoris Causa.

"So it seemed a little weird, at the same time, I felt very happy kasi yun, in the end, yung mahabang journey papunta dito...

In the meantime, congratulatory messages have been pouring in on his Facebook accounts, overwhelming Ricky.

"It was all worth it dahil sa warmth ng response nila ngayon sa akin.

Ricky delivered a 13-minute speech to the 2019 graduating class of P.U.P.

It was a great speech, but he was shaking all throughout.

Eloquent with his pen, the writer has always shied away from public speaking. It makes him nervous.

He recalled an incident during his time at U.P. Diliman. As president of a college organization, he was asked to do a short speech in front of his peers.

According to Ricky, it was his close friend Jo-Ann Q. Maglipon who gave him tips on how to speak in front of an audience.

Here's the full transcript of his speech as posted by ANCX: