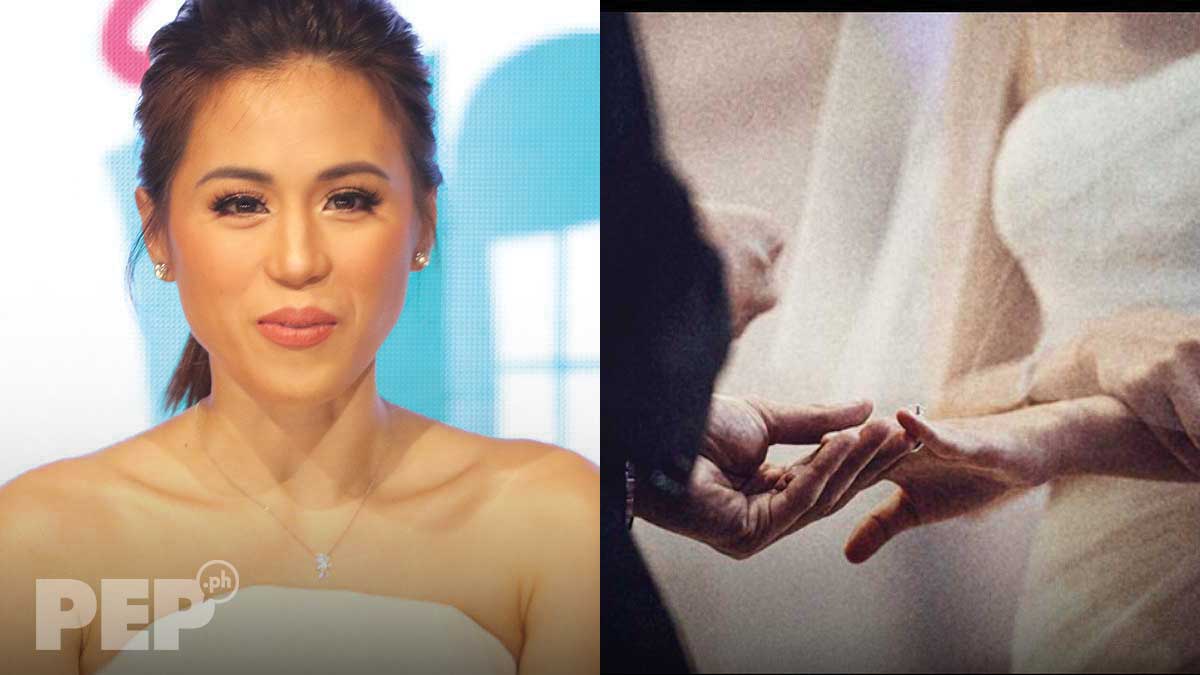 Toni Gonzaga to husband Paul Soriano: "Happy anniversary to the man of my dreams!"
PHOTO/S: Noel Orsal / @celestinegonzaga on Instagram

On their fourth year as a married couple, Toni Gonzaga is still very much in love with her husband Paul Soriano.

Have you read the wedding anniversary message she posted yesterday, June 12? It was nakakakilig!

She wrote, "4 years ago today I married the man I’m spending the rest of my life with.

"The fact that you have stayed with me for 12 years now is a testament of how patient, understanding, and loving you are as a person."

Toni also considered herself lucky for having a husband who is a family man.

She continued, "Being an adult and a parent is never easy but it gets bearable because we are in this together.

"You have been an extraordinary partner, a great friend and a loving husband.

"I'm so grateful that Seve has a responsible father he can always look up to."

And whatever challenges the future holds for them, the ABS-CBN host-actress is confident that they can surpass them easily.

"Thank you for all that you are to me and our family. I can go through life knowing I always have someone I can rely on when we pass through rough waters.

"The best is yet to come @paulsoriano1017 and I believe we are just scratching the surface!

"Happy anniversary to the man of my dreams! I appreciate you, I honor you and I will always always love you."

WHAT WAS TONI AND PAUL'S BIGGEST CHALLENGE AS A COUPLE?

Before tying the knot, Toni and Paul became girlfriend and boyfriend for eight years.

Throughout that period, they were never allowed by Toni's parents to have overnight trips.

In fact, Toni's dad Carlito and her mom Pinty strictly imposed a curfew.

In the YouTube vlog she posted on January 30, 2019, Toni could not contain her admiration for the man who became her husband.

"He always tells me lang na, 'What can we do? That's the rule of your parents. We just have to listen and obey them.'"

Toni and Paul exchanged vows at the Taytay United Methodist Church in Taytay, Rizal, on June 12, 2015.

Their honeymoon trip to Amanpulo in June was the first time they went out-of-town. It was a gift from their Ninang Kris Aquino.

They returned to the world-famous island with their two-year-old son Seve in January 2019.

Toni said in her vlog, "I realized that your obedience and sacrifice will always be rewarded in the end. Medyo matagal-tagal ang hinintay ko para ma-experience ito. Pero it was all worth it.

"Kaya pala ako pinaghintay nang matagal, kasi may magandang nakalaan. Kung siguro pinilit ko pumunta dito noon, it would've cost me hundreds and thousands of pesos, and it would've cost me my relationship with my parents. But because I waited for God’s perfect time, it cost me nothing."

WHAT ARE TONI AND PAUL'S BIGGEST CHALLENGES AS A MARRIED COUPLE SO FAR?

Trust plays an important role in the 12-year relationship of Toni and Paul.

When asked about the latter, Toni quickly dispelled the rumors.

In December 2017, Paul told Boy that the rumors were not enough reasons for Toni to feel jealous.

He said, "It is there, even the way I feel about Toni is very secure, the trust is there.

"It's never been broken. We know each other well enough to feel anything out.

"If there is anything we try to do a lot is we communicate.

"We talk, we text and all that. We try to [talk], like, when Seve is sleeping. We try to talk.

"Most of it happens in the bathroom, just like talking there… our little quiet space.

Continue reading below ↓
"We catch up on her work and on my work."
Which part of their marriage is a work in progress? In separate interviews, both of them answered, "Communication"

Paul explained, "Si Celestine [Toni's real name] is more of the quiet type, but I know when something's wrong.

"I know when something’s bothering her, so I just have to say, 'What’s up?'

Aware of her shortcoming, Toni said she has been trying to be more open about how she feels.

"That was my biggest problem in the beginning. I do not talk. Di ba nga, I'm a listener and an observer?" she admitted before adding, "I learned how to communicate my feelings.

"Because I always felt na if I say what I feel, baka maka-hurt pa.

"Hindi pala—the more you will be hurt if you don't communicate how you feel."

Is Paul a loyal husband?

Toni told Boy in her November 2018 interview, "There's no reason for me to look the other way.

"Pero sa ngayon, parang there's no way for me to look the other way.

When asked about her "pain threshold" when it comes to love, Toni said she is not the unyielding type.