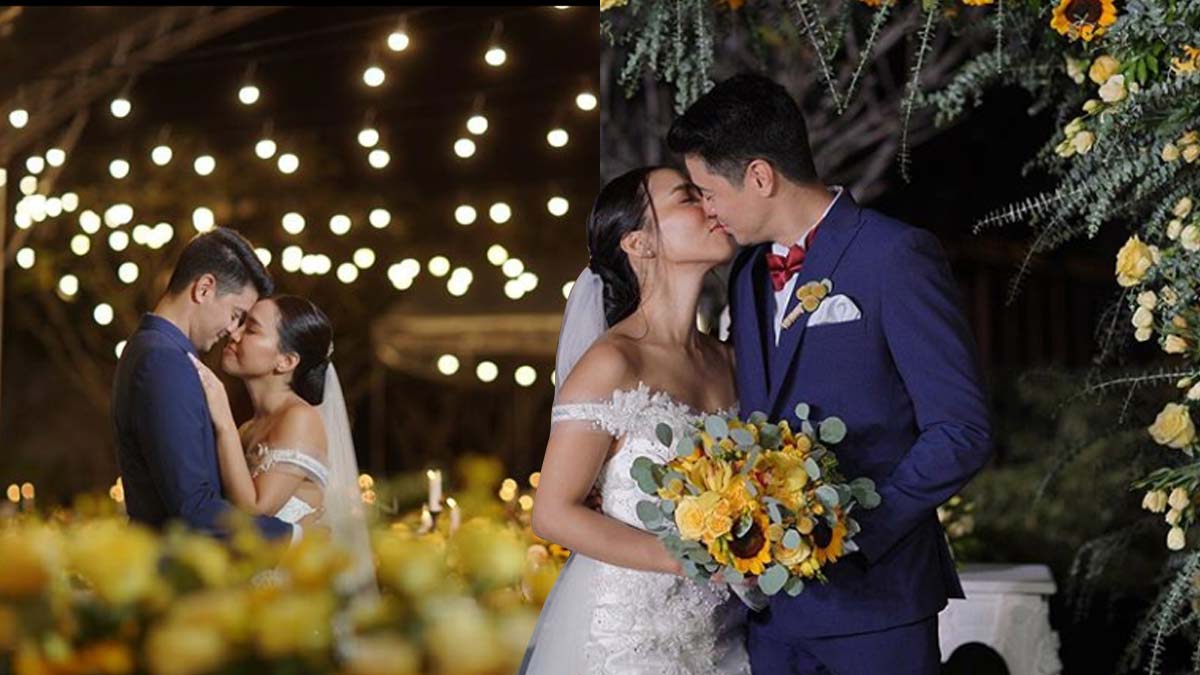 "It's gonna be a happy wedding."

That was what bride Aicelle Santos told PEP.ph (Philippine Entertainment Portal) when asked about her wedding back in October.

Aicelle and Mark chose yellow and blue as the color motif of their wedding with sunflowers as the main decor.

THE BRIDE AND GROOM

Jason Delos Reyes and Mark Anthony Rosales did her make-up and hair, respectively.

As for Mark, the groom looked dashing in a blue tux with a red bow tie.

The couple both wore hand-crafted shoes from Marikina-based brand, Shoepatos.

For the bridal march, the couple chose the Amel Larrieux song "Make Me Whole."

Sunflowers continued to be the wedding's main motif during the reception festivities.

One of the main highlights from the reception was Aicelle and Mark's first dance as husband and wife.

They were serenaded by The CompanY.

In an exclusive interview with Aicelle and Mark a month before their wedding, the couple recalled how the proposal happened.

Sunflowers were already a motif then and Mark was specific about getting long-stemmed sunflowers for his proposal.

But during that time, around March 2018, this particular variety of sunflowers was not yet in season.

Mark waited for two and a half weeks.

Those sunflowers were freshly delivered to Seda Vertis North hotel straight from the Mountain Province via a jeep.

At that time, did Aicelle already have a hunch that Mark was going to pop the question?

The GMA-7 talent and Broadway actress said, "No, though napag-usapan namin na we see each other in the future, ganyan.

Aicelle still couldn't believe how everything fell into place at that moment.

On that day, Aicelle just finished an interview with GMA-7 newcaster Jessica Soho about her Broadway endeavors.

Then before heading to Seda Vertis North for what she thought was a singing gig, Aicelle had two hours to spare.

"As in, bihira lang ako mag mani-pedi. Once a year.

"And that one day in that year, iyon iyong nag-propose."

In 2016, the then GMA-7 reporter took a chance to get Aicelle's attention by sending the Kapuso talent a direct message on Instagram.

It took a month for the now ESPN5 sportscaster to get a reply, but this opened up the chance to ask her out on a date.

Aicelle and Mark's first date became a meaningful encounter for them and signaled the start of a deep connection between them.

Two weeks after, they became a couple.