"I will always try my best to be the best husband and your best friend, to give all the love I can give until the end of our lives." Edmar de Luna vows to his wife, Cathy Rem

It was love at first sight for just-married couple Cathy Rem and Edmar de Luna.

"I knew he was the one the first time I met him," Cathy told PEP.ph (Philippine Entertainment Portal) in an exclusive interview via e-mail.

Edmar is a civil engineer working in a construction company owned by his family.

The couple tied the knot after more than two years of being together. 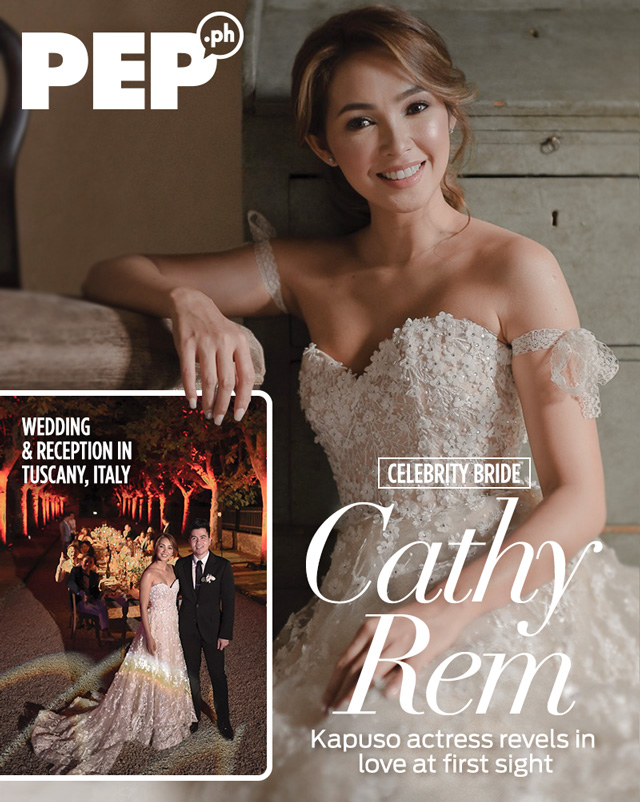 ABS-CBN singer KZ Tandingan and Edmar's cousin Veronica Resurreccion played an important role on how the two got together.

"I used to sell beauty products, rice, and longganisa to them! I guess the Bisaya in us helped in developing our friendship."

It was KZ and Veronica who set up the couple to a blind date.

Cathy recalled, "KZ brought me to Extraordinail which is owned by Nica, the cousin of Edmar, last January 12, 2016.

"Nica and KZ are close friends, she then heard I was single and immediately set me and Edmar for a blind date the next day.

"I had no idea how he looked and who he was until our first date."

"He brought me to Inagiku in Makati Shangri-la.

"Immediately after our date, I met up with KZ and other friends to tell them about our first date."

Cathy's very first impression of Edmar was "silent and decent."

The former Pinoy Big Brother housemate considered this as her most memorable date with Edmar.

In their wedding video, Cathy recalled why.

"Gumaganun talaga ako, the whole time from QC to Makati!"

Since then, Cathy and Edmar's relationship went from strangers to travel buddies in a snap. Together, they have explored the streets of Tokyo in Japan, Lisbon in Portugal, and Amsterdam in Netherlands, among many others. 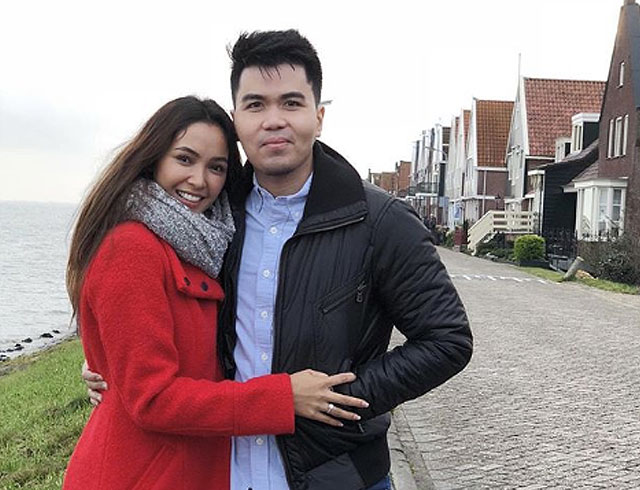 But their trip to Nami Island in South Korea held the biggest surprise for Cathy, the sweetest thing Edmar has ever done.

Cathy shared, "He proposed to me last October 27, 2017, during fall season in Nami Island Korea.

"After our photo shoot in the location, he suddenly showed me a video from his phone with an intro 'The Proposal.'

"It was a whirlwind of thoughts and emotions, I can't put them to words.

Cathy said "yes" to the man she admires the most for his strong faith to God.

"Edmar is a very prayerful man. My connection with God got deeper because of him.

"We pray together every day." 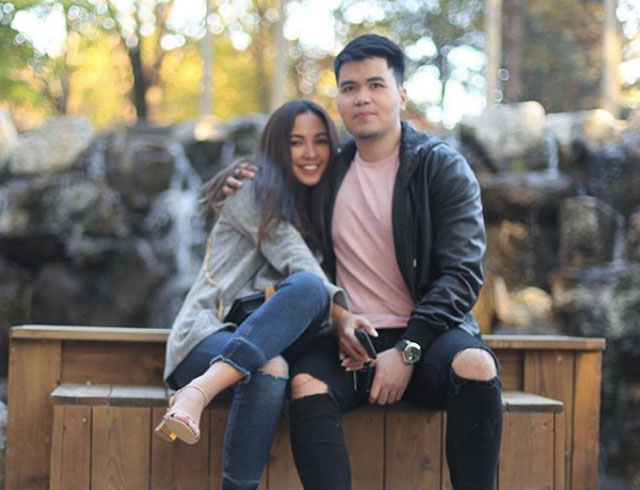 THE WEDDING IN TUSCANY

The couple had two wedding ceremonies.

The first was a garden wedding at Villa La Selva Wine Resort in Tuscany, Italy, with only 23 of their closest friends and family present.

Last November 2, Cathy thanked EJ through an Instagram post for the beautiful gown he made her and wrote, "You were there even before I started my career.

"From making all the outfits for me during my modeling days in Bohol to creating this beautiful piece for my big day in Tuscany.

"Thank you for everything!" 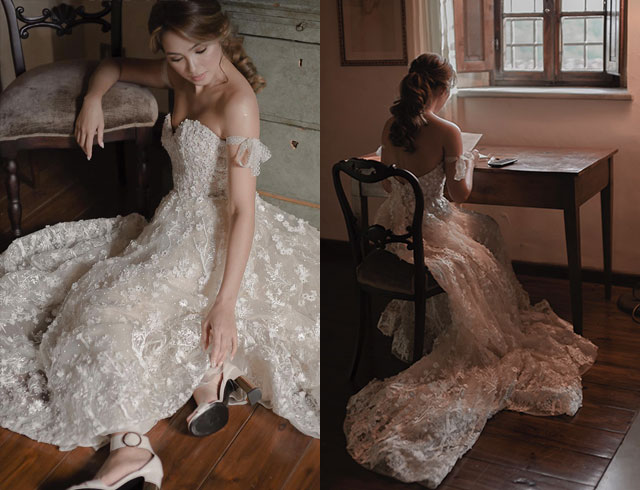 "Robert Blancaflor took a detour to Italy to help us style and organize our Tuscan wedding.

"It was covered by Jason Magbanua and Mangored Studios."

As for her makeup, Cathy wanted something simple and uncomplicated.

She told PEP.ph, "I did have some pegs, thanks to Pinterest!

"I wanted a barely-there make up for the wedding."

Edmar, on the other hand, wore a Dolce & Gabbana suit. 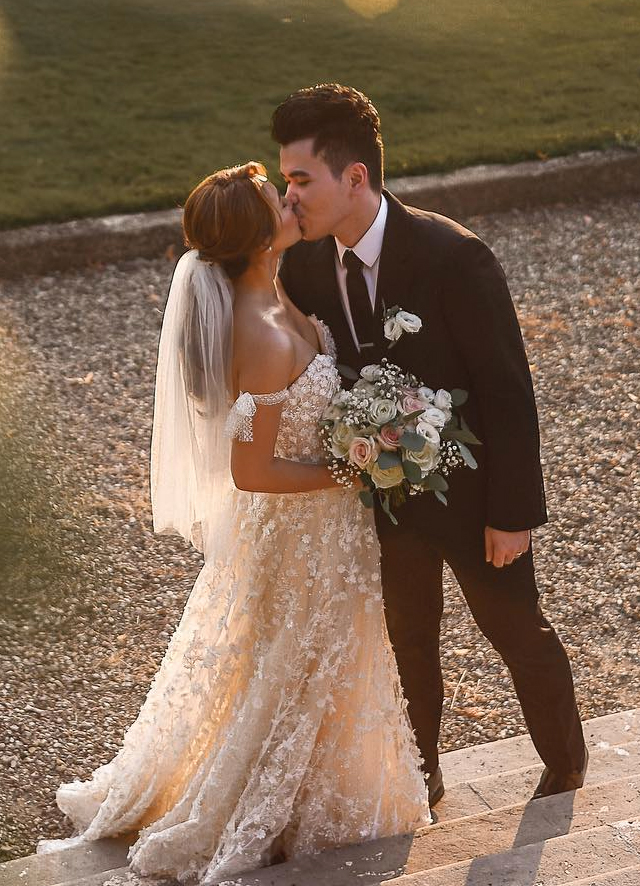 When asked why they picked Tuscany as the location for their wedding, Cathy explained, "Edmar and I love Italy. It speaks so much about our personality. Very calm.

"We love the unique history of Tuscany, plus their famous wines."

Event stylist Robert Blancaflor worked his magic and had this amazing view as the backdrop of Cathy and Edmar's wedding.

Last August 2, Robert shared details of how he styled the venue and wrote, "For this romantic Tuscany wedding set against a backdrop of beautiful Tuscan Cypress Trees, the venue speak for itself and highlight such a stunning landscape.

"When planning any event design especially in already-gorgeous settings like this, one must design the decor and styling around the venue's aesthetics and create design experiences around its natural beauty." 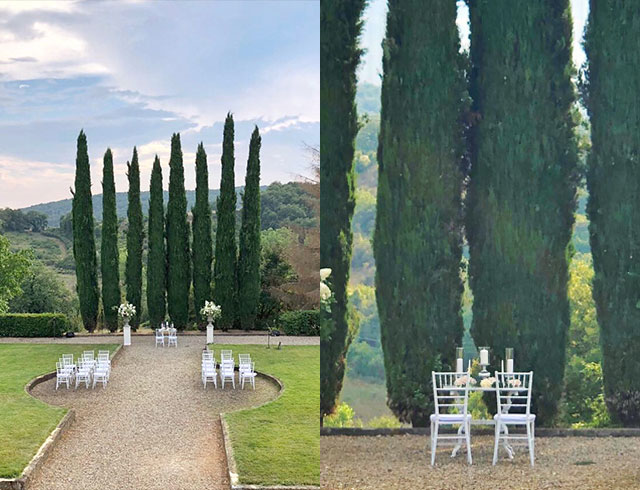 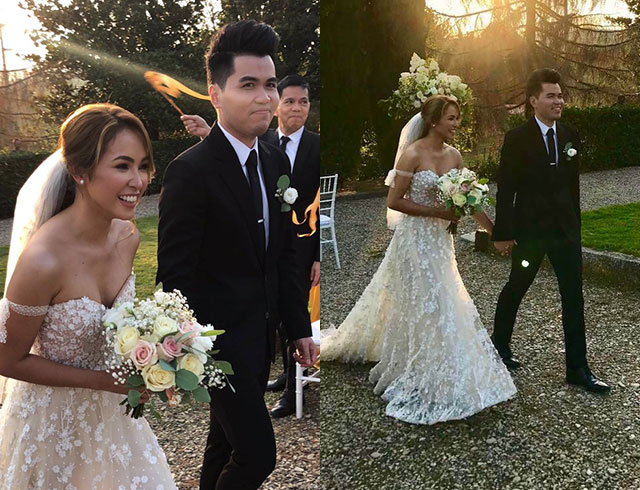 KZ Tandingan and TJ Monterde sang at the wedding reception.

Cathy and the singer have been friends for over four years since 2014, "I guess the Bisaya in us helped in developing our friendship," the actress remarked.

And one of the highlights of their wedding in Tuscany was KZ's speech.

She recalled her conversation with Cathy in the presence of Edmar's cousin Nica--and how they ended up being the matchmaker to the newlyweds.

"'Tapos sabi niya, 'Why do I always end up being the one na who's cheated on, taken for granted, and yung hindi minamahal?' 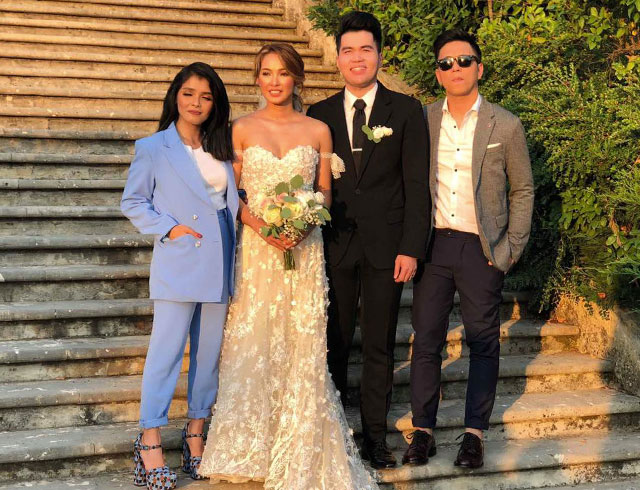 KZ continued, "I've never seen Ate Cathy...glowing. She has finally blossomed to the beautiful flower that she's always been inside.

"By looking into her eyes, I know she was loved, taken cared of, and respected. 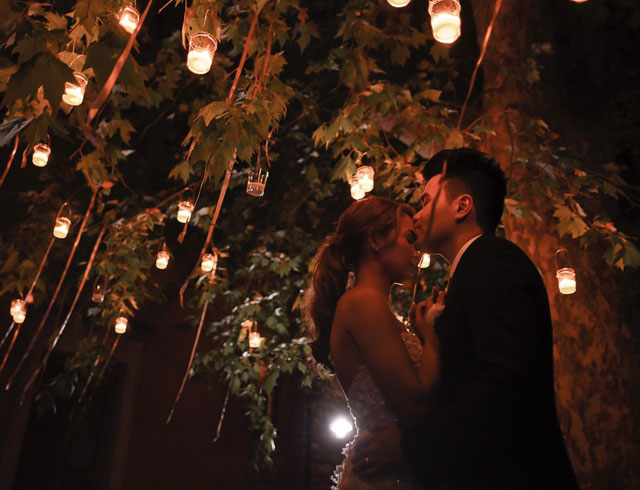 After the wedding, the guests enjoyed some wine, cheese, and tapas. 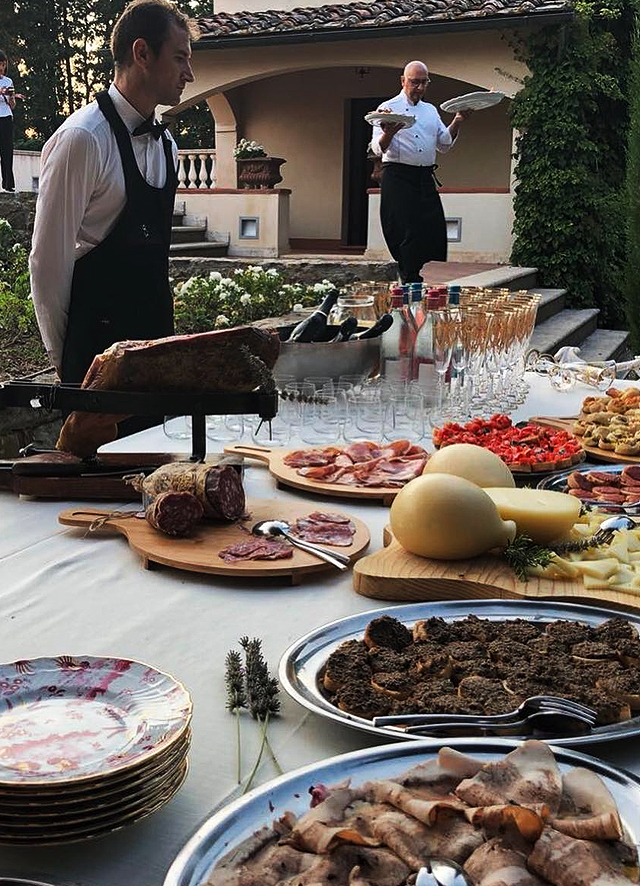 All 23 guests shared a long table prepared by Rob and other Italian event stylists.

The couple wrote a thank-you note, and placed it on each seat as a way of expressing their gratitude toward their guests. 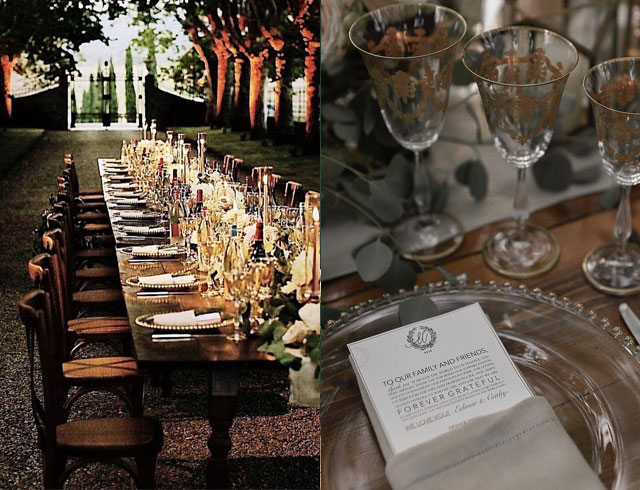 On Instagram, Rob shared the details of his set-up for the reception.

"For this intimate wedding reception, the couple gathered their closest family and friends for an unforgettable candlelit dinner under these beautiful Tuscan Trees.

"Personal touches made this reception so genuine; the love of the couple for their nearest and dearest was in all the little details used in this table.

"The setup was a wonderful collaboration of Italian and Filipino talents and a beautifully romantic and intimate celebration of love in one of Italy’s most romantic settings." 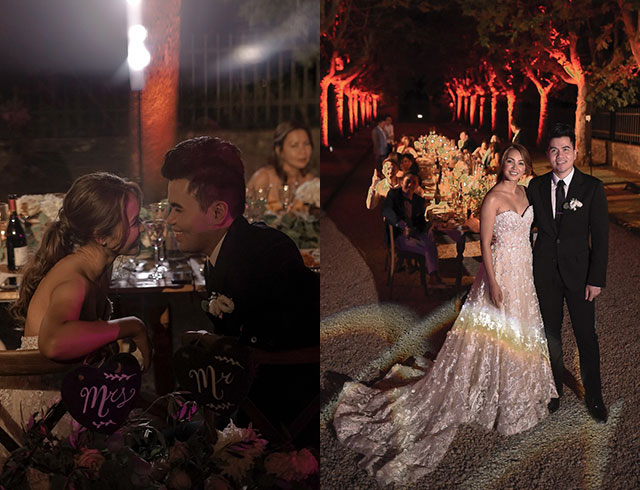 What's the best part of your wedding in Tuscany?

Cathy answered, "There were no wifi in our villa so everyone was able to interact with each other.

"We left Tuscany as best friends." 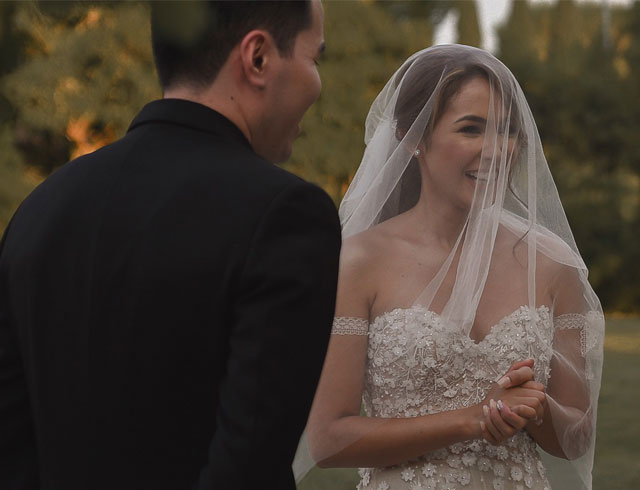 In his wedding vow, Edmar recalled the first time he saw Cathy.

"Who would've thought that the person I'm fond of watching 9 years ago, would turn up to be the one standing beside me today.

"I will always try my best to be the best husband and your best friend, to give all the love I can give until the end of our lives."

For her part, Cathy still could not believe that her prayers have finally been granted.

"I still can't believe I met you the day after I prayed... thank you God.

"You're a great man and I love you so much.

"Today, I vow before God and before our family and friends that I will love you for a lifetime.

"I will be a good listener to you even in your silence.

I will always pray with you, babe, like we always do.

"In crisis and in happiness, from this day to my last, I am yours." 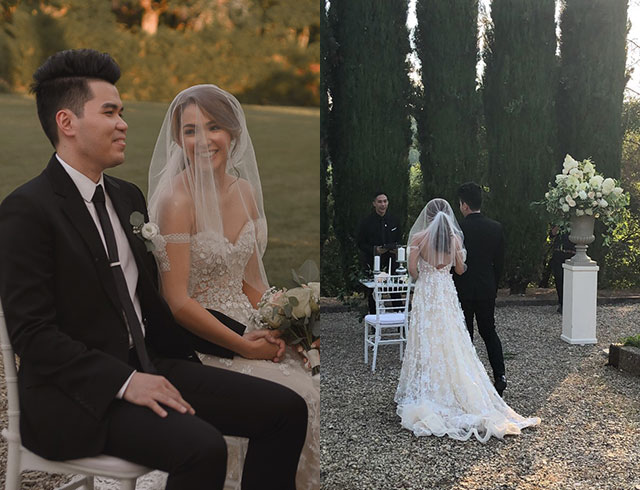 THE WEDDING IN MANILA

Cathy and Edmar had their grand wedding on October 29, at the Makati Shangri-La, where they had their first date.

The couple decided to go big on their Manila wedding, and invited 400 guests so that everyone on their long list of friends and family can witness their union.

She added, "Less stress since we had a wedding planner.

"We just did whatever we can, and before we know it, everything has already been accomplished."

Arranging their guest list was the hardest part of wedding planning "because it changes up to the last minute."

It was organized by the same team that handled their Tuscany wedding.

Cathy said she never had a "bridezilla moment," but rather considered herself as a "bridechilla." 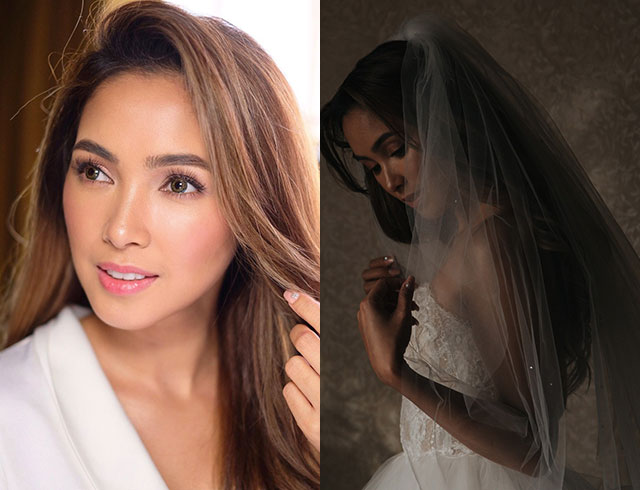 For her Manila wedding, Cathy wore a bridal gown designed by Monqiue Lhuiller and a pair of crystal-encrusted shoes from Christian Louboutin.

The Kapuso actress said it took her months to finally take home her wedding gown.

She wrote on Instagram last October 8, "Atfer seven months of waiting and three fittings I finally have it.

"I can't thank God enough for having these memories of being a bride. Choosing my wedding dress is defo the fave thing!" 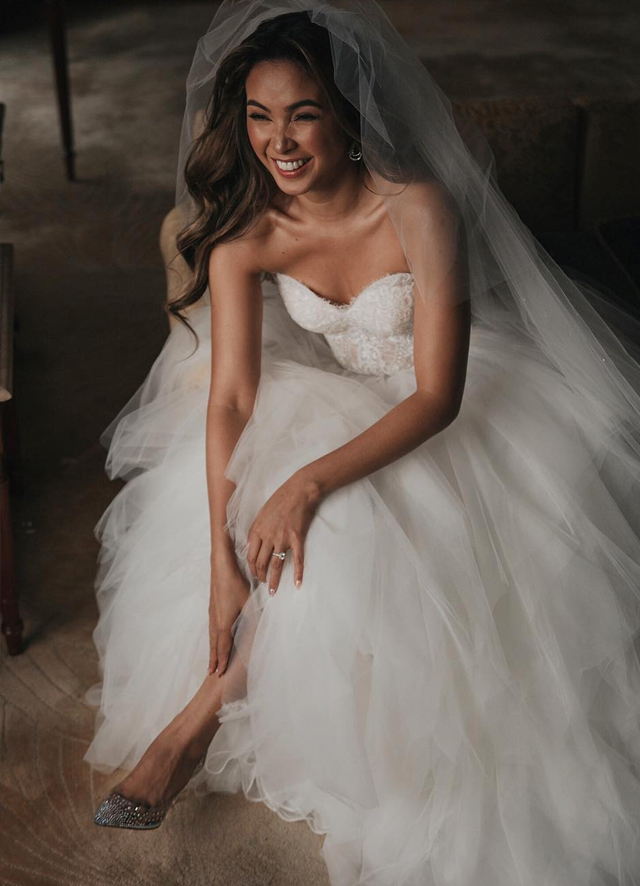 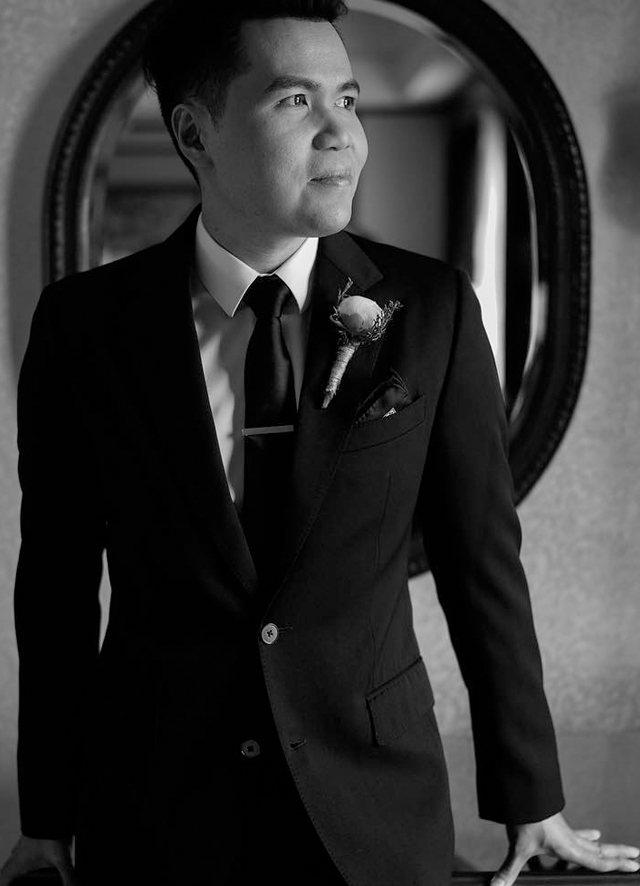 Robert Blancaflor again took charge of the wedding venue, which he turned into an all-white setting with flowers and crystals.

Rob shared the details on his Instagram last October 30 and wrote, "After a stunning & intimate Tuscan wedding, Edmar and Cathy celebrated their union once more with friends and family in Manila.

"The ceremony was a glorious all-white setting with hundreds of hanging crystals for the aisle. It was pristine elegance at its finest." 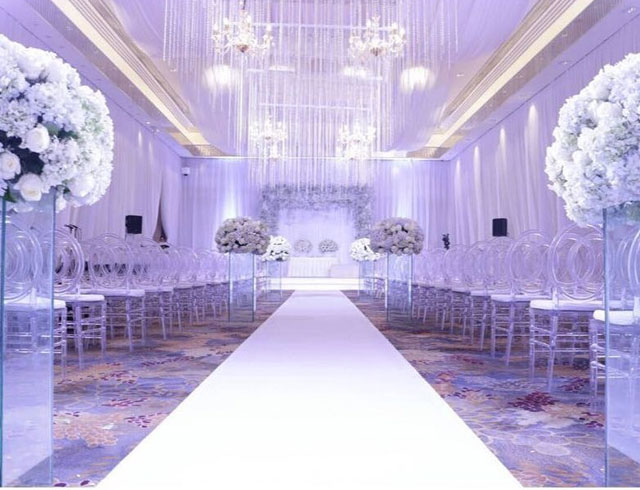 In contrast to the immaculate white wedding hall, there were colors everywhere for a night of fun at the wedding reception.

"Aside from our family being present, everybody was having fun dancing with each other even if they were strangers to each other," Cathy shared.

"We used all imported flowers--thousands of Ecuadorean Roses in shades of white, cream, light lavender and blush paired with Holland Hydrangeas, Astilbes, Italian Eucalyptus and lavenders for a lush and gorgeous look.

"The end result was a glamorous and elegant wedding reception, reminiscent of the intimate Tuscany dinner that the couple hosted in the summer." 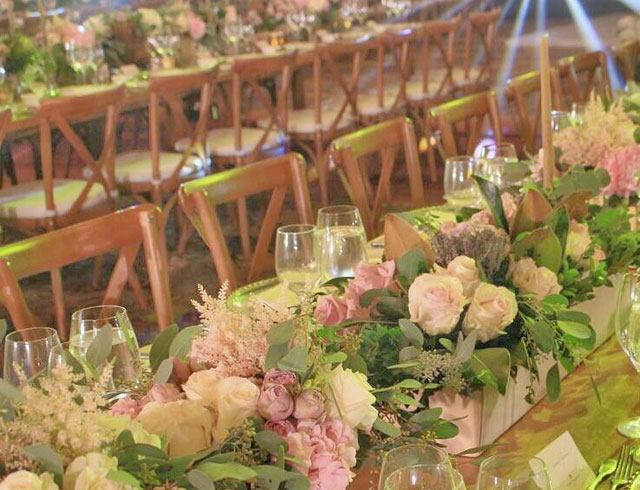 Cathy and Edmar's Manila wedding was attended by their closest friends from the entertainment industry, a few of whom were included in their entourage.

Cathy told PEP.ph, "KZ and co-GMA Artist Center talent Thea Tolentino were part of the entourage. Yasmin Kurdi's daughter Ayesha was one of the flower girls. 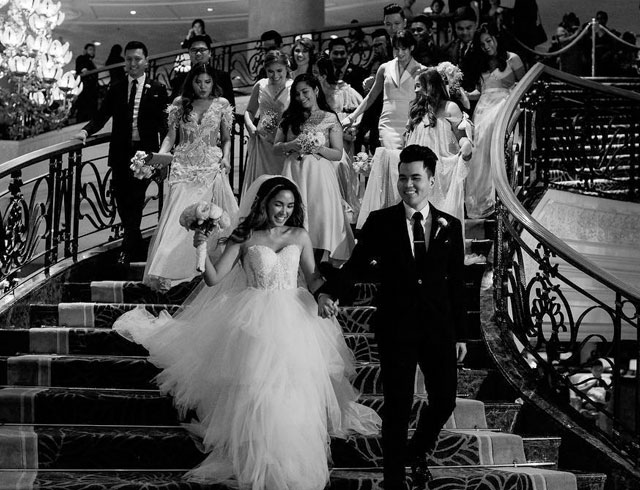 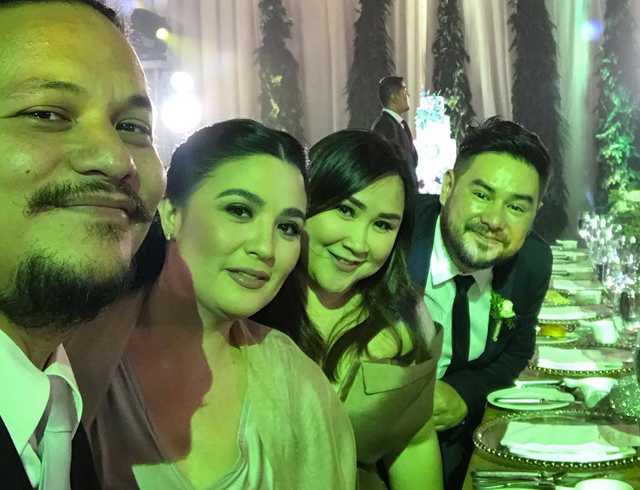 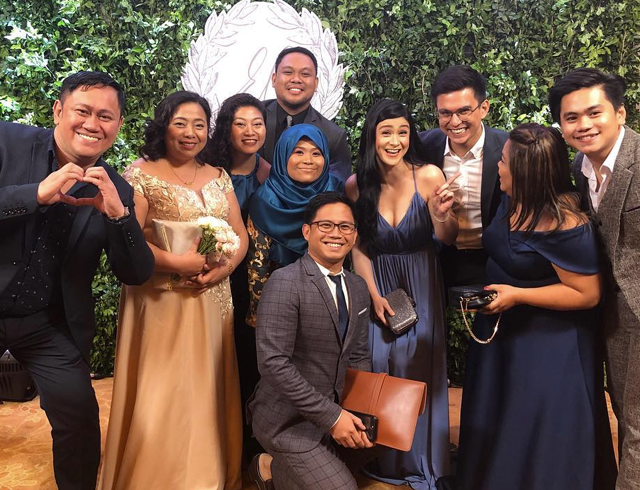 In this photo, they were joined by Mags Apparel CEO Mags Cue, one of Cathy and Edmar's ninangs, and her husband Oliver John Yu Cue. 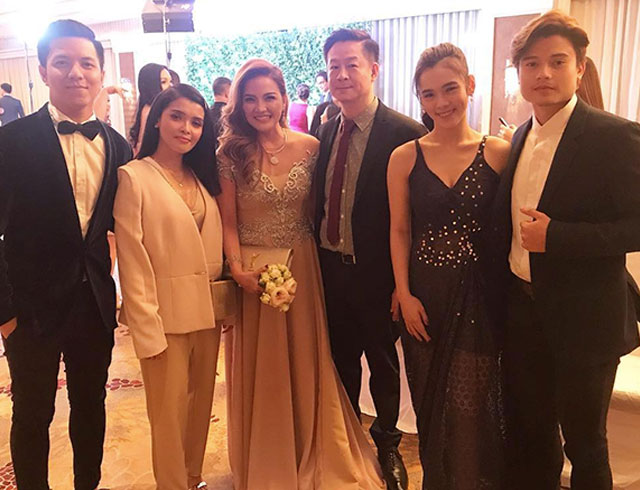 After their wedding, Cathy and Edmar will be flying to Israel for their honeymoon.

Here is the list of the couple's wedding suppliers: