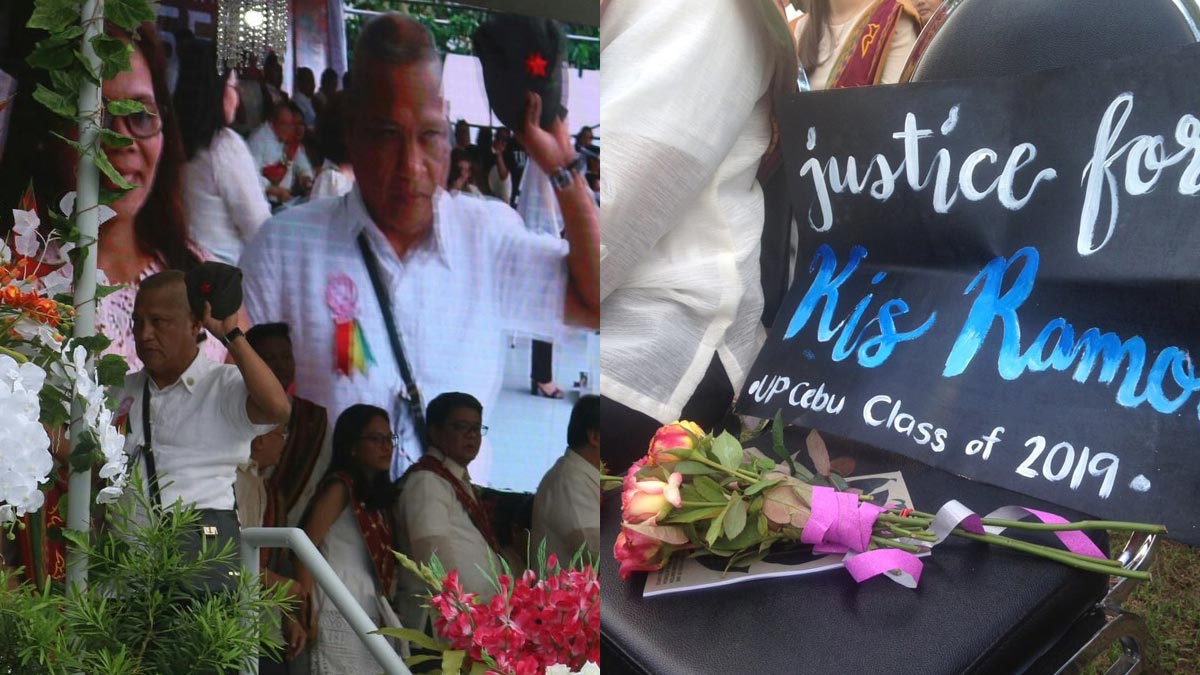 Reynaldo Ramos raises a Mao cap as he and his wife Elvira receive the diploma for their daughter, Kis Tryvl, at the graduation rites of University of the Philippines Cebu for class 2019.
PHOTO/S: Chad Booc on Facebook

To see a son or daughter graduate is a milestone for every parent, a cause for celebration.

But the graduation of Kis Tryvl Ramos from the University of the Philippines Cebu was a sad and painful day for her parents, Reynaldo and Elvira Ramos.

A working student at The Good Cup Coffee Company, Kis Tryvl was killed on April 10, 2019, when an armed man entered the shop and started shooting everyone in sight. She was 21.

On June 28, 2019, her parents Reynaldo and Elvira marched with the graduating class of the university to receive the diploma of Kis (her nickname), a BA Psychology major.

Standing on stage, in front of his slain daughter's batchmates, Reynaldo raised his fist with a Mao Zedong cap to signify resistance and revolution.

WHO WAS KIS RAMOS?

The student organization Anakbayan UP Cebu remembers, "She also went on the streets, protesting for justice to all human rights victims and leading the way to ensure that the human rights of the marginalized sectors will not be violated."

The organization also hails the kind of student Kis had been—"dedicated, passionate, and ready to serve.”

According to reports, an armed man entered The Good Cup Coffee and shot Kis twice on the forehead.

The shop's part-owner John Michael Hermoso was also shot, twice on the chest. He died on the spot.

Kis died as she was being brought to the emergency room of Velez Hospital.

Also injured in the shooting were Jerome Amada and Sherwin Rivera.

Cebu Daily News reported that based on the initial investigation, John Michael was the main target, and his acquaintance Hans Jurgen Dingcong was the alleged suspect.

It was allegedly a crime of passion, and Kis was in the wrong place at the wrong time.

Her mom Elvie said in one of her interviews, "Na angin lang siya [nadamay lang siya]."

Tears overflowed during the graduation rites of UP Cebu's class 2019.

Chad Booc, one of the graduates, posted on his Facebook account some photos taken during the ceremony.

In the comments section, the netizens seek justice for the innocent Kis. 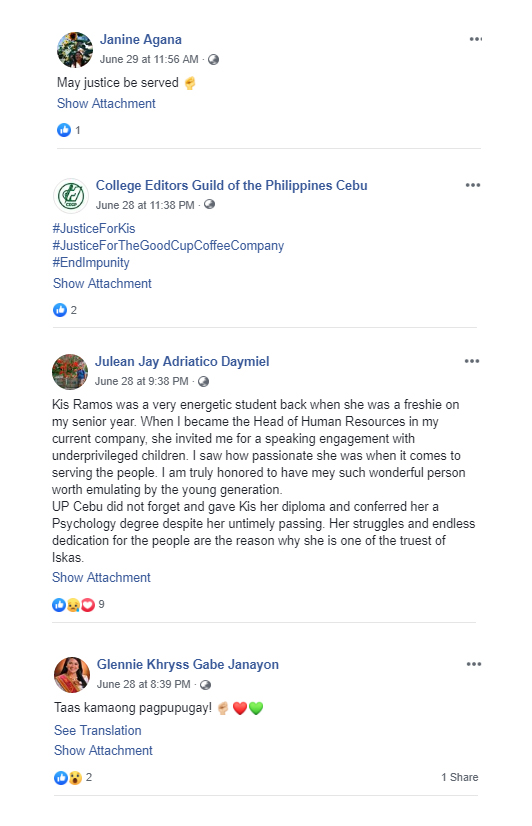