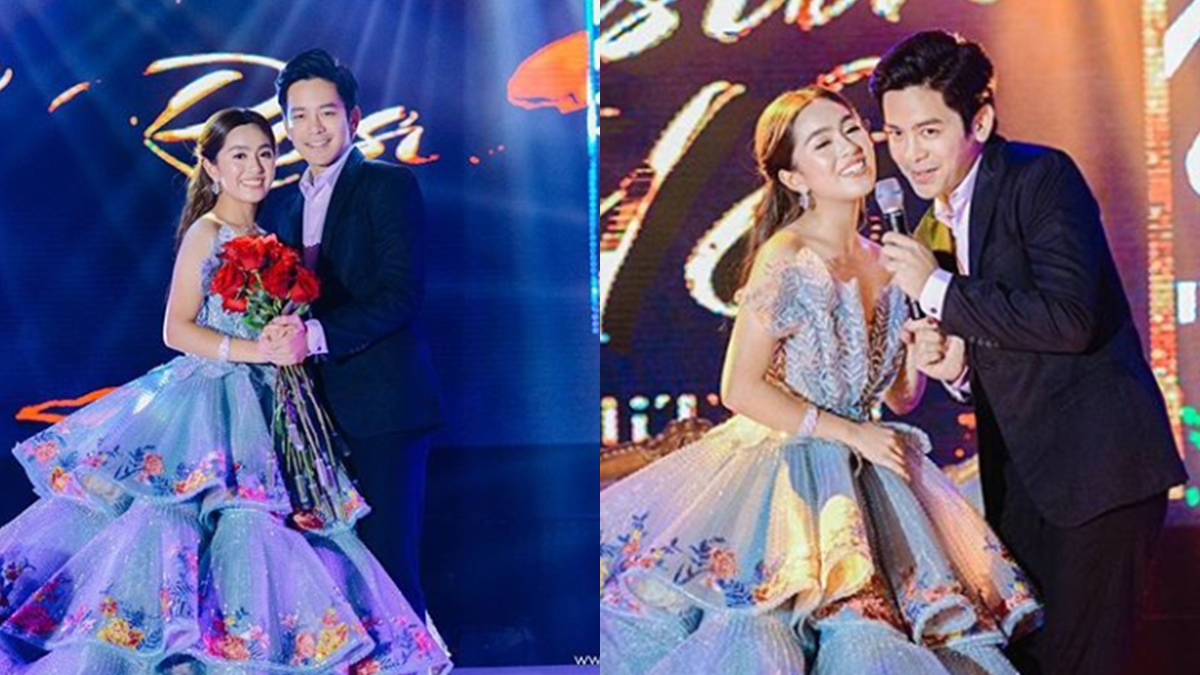 Christine Catacutan gets the sweetest surprise from her friend Joshua Garcia at her 18th birthday celebration on October 12, at the grand ballroom of Clark Marriott Hotel in Mabalacat, Pampanga.
PHOTO/S: Courtesy of Nice Print Photograhy

Have you ever dreamed of having your favorite celebrity appear in one important event of your life?

This was exactly what happened to Christine Catacutan when ABS-CBN actor Joshua Garcia suddenly showed up at her Crazy Rich Asians-themed debut party.

The aspiring actress-performer turned 18 on October 9, and celebrated it last October 12, Saturday, at the grand ballroom of Clark Marriott Hotel in Mabalacat, Pampanga.

Through her talent manager Kristian Kabigting, PEP.ph (Philippine Entertainment Portal) got to send her some questions.

She told PEP.ph, "Joshua was my 18th dance during the 18 roses part of my celebration... definitely the highlight of my night especially when he sang my favorite songs."

We learned Christine has known the 22-year-old actor for two years.

She recalled, "We first met at the Capas Day 2017, my dad invited him to be one of the guest performers.

"From there on, he has been my inspiration. Aside from his head-turning charm, I admire his humility and his goodness to people.

"'Magaan siyang kasama' is the proper term because he is just like everyone else, simple and not a superstar."

About that memorable dance, Christine said, "It felt like there were butterflies in my stomach.

"I can't contain the 'kilig' because his charm was really irresistible that night.

"But I got myself to calm down when he started singing my favorite song, 'Everything' by Michael Bublé and 'Binibini' by Janno Gibbs, and we managed to share a small conversation.

According to Christine, a senior high school student, deciding on the theme was the hardest part of planning her party.

She said, "It was actually the theme. I was very indecisive on the theme, plus I was constantly multi-tasking between preparing everything for my debut and my competition in Journalism.

"It took me a little time to pick a theme before finally settling down with a Kevin Kwan novel-inspired party.

"As any other debutante would have it, I wanted my party to look and feel like it has been directly lifted off a fairy tale, but, at the same time, I want it to have a dash of spunk.

The debutante was very hands-on throughout the party planning that took at least two years.

Christine said, "I was onto every detail of my party. My mom helped me a lot, too—from attending late-night meetings to hotel reservations to food-tasting and a lot more."

She added, "Envisioning, more so executing, a party as opulent and as spunky as the one I had taken two years to come to life."

How many guests did she have?

Christine answered, "The initial reservation we had at Marriott was for 300 pax, but the actual attendees were 350."

THE DETAILS OF CHRISTINE CATACUTAN'S DEBUT

Christine's whimsical ball gown was made by Mak Tumang, the same designer who created the iconic lava gown of Miss Universe 2018 Catriona Gray.

She also wore a red, sweetheart-cut ball gown made my Michael Leyva.

She was styled by Jeff Galang.

Aside from Joshua, Richard Poon also performed at her birthday bash.

Richard serenaded the debutante with his performance of Michael Bublé's "The Way You Look Tonight."

Meanwhile, photographer and videographer Nice Print Photography was in charge of the photo and video coverage.