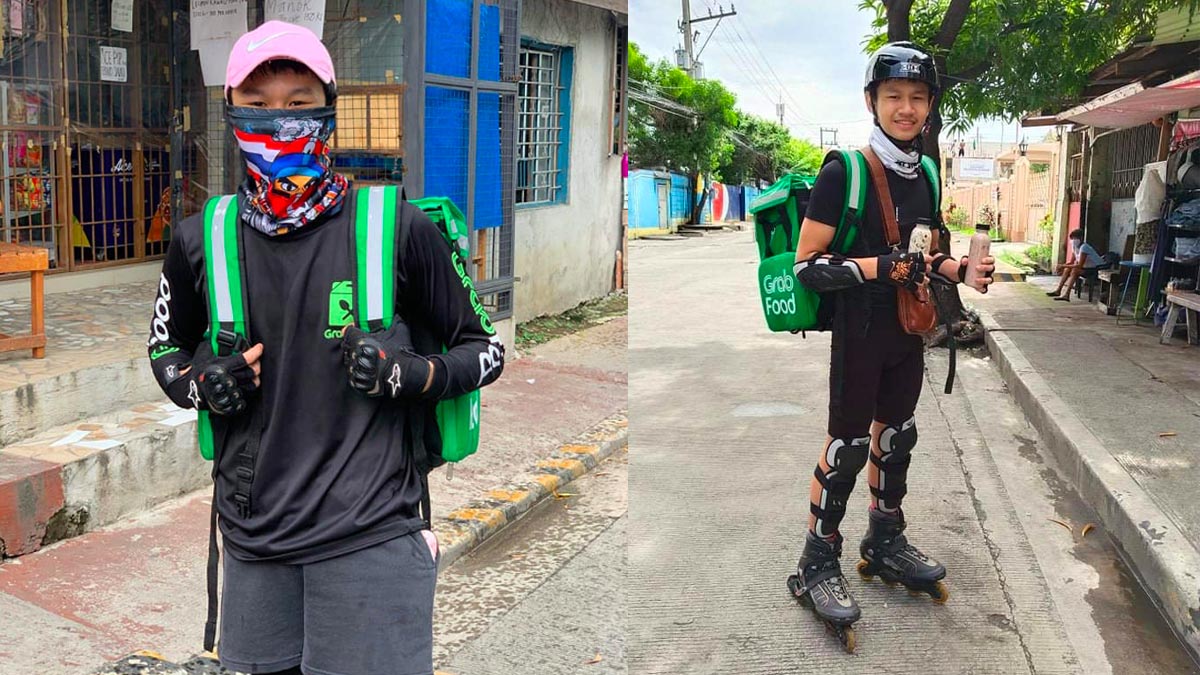 Kean Arcilla Ramos, 18, has been selling and delivering jelly drinks since August 17, 2020. But he gets the job done in rollerblades.
PHOTO/S: courtesy of Kean Ramos

Kean Arcilla Ramos is a teenager with man-sized worries.

While boys his age are at home gaming, distance learning, or simply staying put because of the pandemic, Kean is out on the streets eking out a living for his sick farther.

The 18 year old from Muntinlupa City can be seen going door-to-door to deliver homemade chocolate and coffee jelly drinks.

He started doing delivery on August 17 to help shoulder his father’s medical bills due to an enlarged prostate.

The illness forced his father to stop working thus putting a strain on the family’s finances.

For someone who loves sweet treats, the decision to sell jelly drinks was an easy choice to make.

The business is pretty much a one-man show: Kean makes the jelly drinks himself and delivers them in his neighborhood from 4 p.m. to 6 p.m. daily, rain or shine.

Interestingly, instead of using a motorcycle or bicycle, Kean was doing his rounds on rollerblades, a discarded pair found by his auntie in Singapore.

Kean’s story went viral after his mother, Cherry, posted pictures of him on Facebook.

The photos captured the teenager with a big delivery backpack and while on the move for his usual run.

Many netizens commended Kean for his ingenuity, for being “masipag,” and for being a good son to both his parents

Kean clarified though that he is not working for Grab, “Nagkataon lang po na iyon ang ginagamit ko na pang-deliver.”

The backpack—which bears the familiar logo—as seen in the viral pictures belongs to his brother who works for the ride hailing-delivery service company.

His father also worked for the same company prior to getting sick.

One of the people who got wind of Kean’s story was former Ateneo volleyball player and TV host, Gretchen Ho.

Coincidentally, Gretchen has been spearheading the initiative Donate a Bike, Save a Job, which aims to give out bicycles to individuals who need one to go their workplaces and keep their livelihoods at the same time.

Kean became the first recipient of Gretchen’s donation campaign. He received a blue folding bike from the TV host herself.

Gretchen posted on Facebook on August 20, “To da rescue!! OUR FIRST BIKE RECIPIENT: 18 y/o Kean Ramos receives a bike from the #DonateABikeSaveAJob project.”

She added (published as is), “Since his dad is sick and can't do his duties as a Grab Food Driver, Kean decided to take the reigns with his own coffee jelly business.”

Kean, for his part, could not contain his excitement upon receiving the good news.

He hopes to put up his own stall someday to boost his income and brand.

But for now, people can still find him on the streets with a bag full of bottled jelly beverage.

This time, he’s on a sturdy new bicycle and not on a pair of old, second-hand rollerblades.

He only realized how lucky he was when he saw the bike and Gretchen in person.

The Donate a Bike, Save a Job drive is helping facilitate alternative income sources since delivery personnel on bikes, like Kean, complement the motorcycle riders and car drivers dabbling in food and parcel deliveries.

A July survey by the Social Weather Stations (SWS) showed that adult unemployment in the Philippines swelled to 45.5 percent from 17.1 percent in December 2019.

At the moment, there are an estimated 27.3 million jobless adults, with the numbers expected to rise in the coming weeks and months.

But hope springs eternal, especially when there are people who are willing to help ease the unemployment situation in the country.