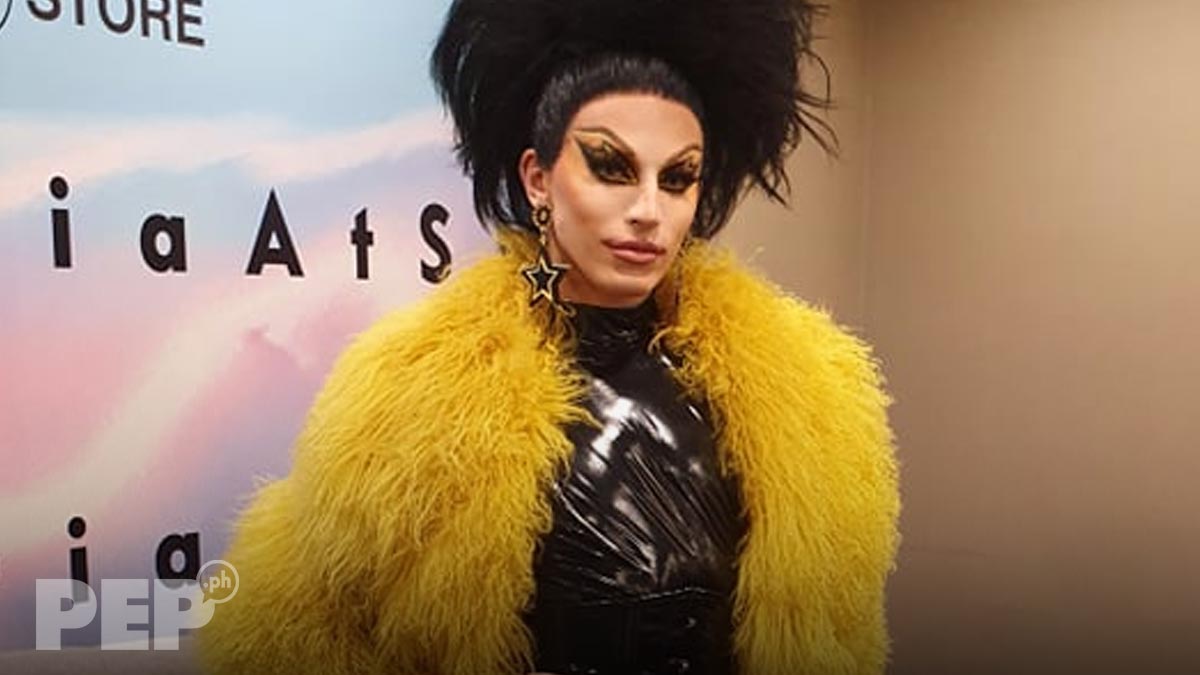 Rupaul's Drag Race Season 10 winner Aquaria talked about her love for fashion and drag in an interview with the press including PEP.ph (Philippine Entertainment Portal) on Monday, September 2.
PHOTO/S: Nikko Tuazon

American drag queen and TV personality Aquaria put on an amazing show during her first-ever meet-and-greet session with her Filipino fans early this week.

She rose to fame after winning the 10th season of the hit reality drag queen competition Rupaul's Drag Race in 2018.

She is also the youngest drag queen to ever win the competition.

A press conference with select members of the press, including PEP.ph (Philippine Entertainment Portal), was held before her meet-and-greet event.

Aquaria expressed her excitement in meeting her Filipino fans first-hand since she only gets to interact with them through her social media accounts.

Aquaria said, "Well, I definitely see, even before my collaboration with The SM Store, I definitely saw a lot of my fans being from Southeast Asia, the Philippines, etc.

"But especially now that everyone's been tagging me in the content that The SM Store has been putting out...I'm just overwhelmed by the amount of love everyone here has for drag."

Aquaria added, "For me, which is really crazy, sometimes I wake up, and I don't always love myself a hundred percent. But to have such a large group of people that do love me a lot is very inspiring.

"I know a lot of the Drag Race girls from the States don't often visit so to be, you know, one of those that did have the opportunity to visit the Philippines is so special."

AQUARIA ON DRAG AND FASHION

At the press conference, Aquaria talked about her love for fashion and styling and how it inspired her to do drag.

The 23-year-old drag queen said, "A lot of my love for fashion and drag comes from styling. Being on the road a lot, I don't get to travel with a lot of stuff on my suitcases.

"But when I'm home and I'm in my closet looking at all the silly jewelry and accessories and outfits that I forgot that I had, that's where I find the most enjoyment.

"Getting to pick and choose things to put together like, pair a crazy big yellow jacket from Italy with some easy-peasy vinyl bodysuit."

Where does Aquaria get the creativity and inspiration to put her outfits together?

"I think, for me, finding the perfect area where a look is in your budget and still showing your creativity is important. You can really make a lot of something out of little to nothing.

"And I think that's what drag has always has been for me. I think that's especially where a lot of cool and imaginative things come from. Having a limit really can push you to be more creative."

A member of the press asked Aquaria how she incorporates a ready-to-wear piece in her drag queen look. Most drag queens wear custom-made pieces for their looks, but Aquaria proudly said she uses RTW from time to time.

She said, "I don't know if it's a good thing or a bad thing for me, but I am notorious for rocking some more casual fashion mixed with something cool.

"Like today's look, this is a really easy, very affordable bodysuit I bought somewhere online, but I paired it with a funky coat that I've been holding on to for a while."

Aquaria said budget constraints had brought out her creativity.

"Sometimes, everyone is living on a bit of a budget. I remember when I was starting getting into drag, it was very much, you know, you can only do afford so much. But the one thing that I always [know] that I had was, you know, a creative eye and a creative gift with my hand and with my make-up.

"As long as I have, you know, some elements to create a face with, I can really do whatever that I want. I can wear something boring on the bottom, but if you use your ability, creativity, and the skill you have as a human to elevate the look or make a look more expensive, I think that's where the perfect balance is.

Asked about one fashion item she can't live without at the moment, Aquaria said, "Nowadays, I need a corset. I love anything that really fits my body and knowing that something is holding on to my waist is a good area for me."

Aquaria was also asked about her reaction to the hit reality show expanding to other countries.

She said, "It's so cool, you know. I think how big it blew up in the States is crazy to think of and it's really special to be part of that. But having all these other offshoots and franchises all throughout the world is really cool.

"Drag Race Thailand is bringing some of the most ridiculous things I think to ever be seen on the runway. From things lighting up in flames to god knows what else is going on. That's so cool.

"UK Drag Race, I'm so excited for. That cast looks ridiculous like... They've got Drag Race Canada and they announced Drag Race Australia... But yeah, I'd love to see Drag Race Philippines, that would be incredible."

With another All-Stars Season coming up, Aquaria was asked who among the drag queens who previously joined the competition would she love to see back on the show.

Aquaria continued, "And also, Shea Coulee from Season 9 was so incredible on her season. I can see [her] being incredible 'til the end of time. There's nothing she will ever do that is wrong or bad so I'd love to see her."