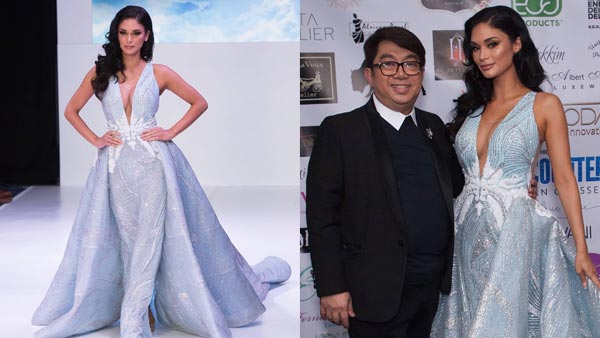 Pia Wurtzbach walks the runway for the finale of Albert Andrada's show during the New York Fashion Week on September 7, 2019.
PHOTO/S: @piawurtzbach on Instagram

She was the star of Albert's show finale held on the second day of the two-day event curated at the National Geographic Encounter Odyssey in New York City.

A day after the event, Pia wowed her Instagram followers with photos of Albert's princess-like masterpiece.

A GOWN INSPIRED BY THE UNIVERSE

The gown, according to Albert, was made with white tulle embellished with Swarovski crystals totaling more or less 20 gross or 2,880 pieces.

It was inspired by the universe.

The designer told PEP.ph (Philippine Entertainment Portal), "Pia's gown in tulle was my own interpretation of the universe, filled with crystals like the thousand stars that show its radiance."

It was part of his 15-piece all-white Illuminati Holiday Collection that, similar to Pia's gown, was inspired by "heavens, clouds, and angels."

Aside from that, Albert also put a lot of effort into perfecting this gown along with the other 14 dresses.

"It took me two months on and off to make it," he said.

With all the hard work, it's no wonder that he saw the beauty queen as the perfect muse for his grand finale.

As his first-rate work deserves to be worn by a world-class talent, Albert also chose Pia because they have built a strong working relationship since 2013, two years before she was crowned Miss Universe.

Albert recounted, "Actually we missed each other in the runway.

"She was usually my muse in my shows before she became Miss Universe, and this is again the first time in six years.

"We really got excited doing this again."

Albert also designed the iconic cobalt blue mermaid gown that Pia wore when she was crowned in 2015.

The pair have been grateful for the support they've been giving each other ever since.

In a separate Instagram post uploaded on September 7, 2019, Albert told Pia, "Flying thousands of miles just to do my show.

"Thank you so much @piawurtzbach for doing the finale of my show here in @nyfw2019.

"You truly are a woman who is confidently beautiful with a heart."