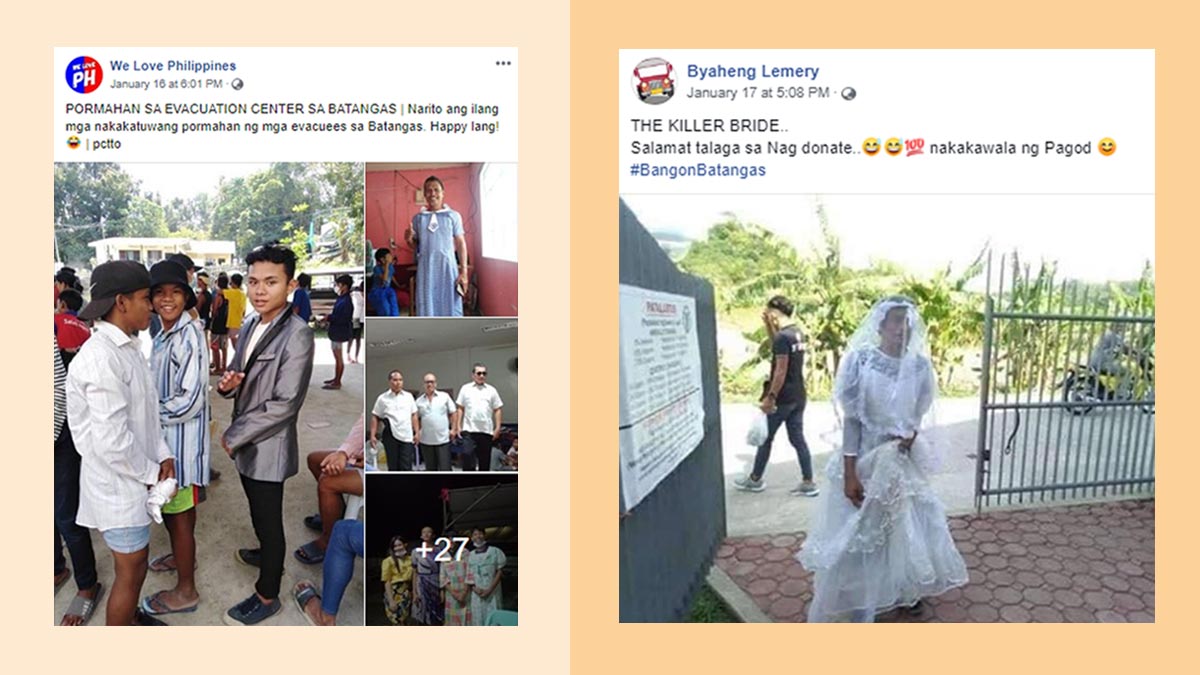 Taal evacuees can brave any calamity—and they do so with wit and style.
PHOTO/S: Screenshots from We Love Philippines and Byaheng Lemery on Facebook

While Taal volcano's eruption forced thousands of shocked Batangeños out of their homes, it has also proven that these southern Luzon folk are some of the most resilient—and hilarious—survivors that netizens may ever be privileged to see.

On January 16, 2020, netizens, including Facebook groups, started sharing photos of Taal evacuees, most of which were totally unexpected—because they have none of the sad, dreary, serious stuff attending calamities.

Instead, Batangueños were shown clad in wacky tops and pants and shoes, the lot of which was donated to them by well-intentioned kababayans.

The photos had women wearing uniforms of fast-food servers and girl scouts, as well as grown men wearing anything from Filipiniana ternos, schoolgirl and teacher uniforms, shiny sharkskin suits, and even a wedding gown complete with veil!

Tagged "Pormahan sa Evacuation Center," the posts are a clear—and, we dare say, creative—reminder of the resiliency and optimism of the Pinoy who embraced all donations gladly.

Take your pick of the best dressed below.

You can also join spreading the good vibes by donating goods to the organizations here.

THE HILARITY HAS REACHED BATANGUENO SONGS

All the good vibes seems to have seeped into all aspects of the evacuee's life.

The latest to hit social media is an ingenuous song that talks about the Batanguenos' lost farms and their quarrels with naysaying TV hosts, the peaceful give-and-take of food cooked in evacuation centers and the general goodwill among townsfolk uniformly displaced from their homes.

What takes the cake, however, has to be the way the same evacuees have appropriated clothes donated to them from all over the country.

They've really gone to town on these, and the song comes right out and says so.

Whether it is the embroidered Filipino terno (gown length no less); a prison uniform (yes, someone actually donated an orange T-shirt with the distinct "P" at the back); a Jollibee uniform (no mistaking the popular fastfood resto wear); or even a T-shirt once used during a wake or a funeral (yes, it said quite clearly: "We will miss you Caring")... the Pinoy triumphs, humor and wit intact.

And the equally humorous and witty song records it all...