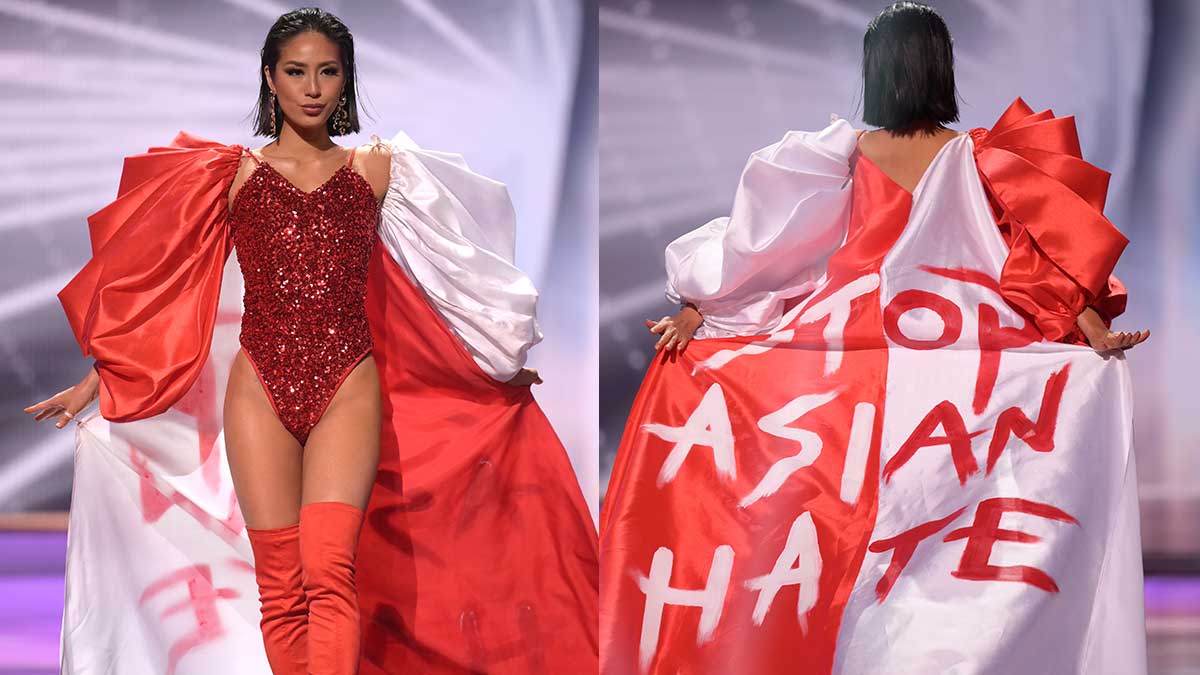 Miss Singapore Bernadette Belle Ong chose to embellish her national costume for the Miss Universe 2020 pageant with a powerful statement.

On Thursday evening, May 13, 2021 (May 14 in the Philippines), the 26-year-old beauty queen, who was born in the Philippines, donned a cape which bore the words: "Stop Asian Hate"—the slogan used by anti-Asian-violence rallies which have been held across the United States this year.

Bernadette revealed another tidbit: her national costume was actually made by Filipino designers.

Bernadette wrote in the caption of her Instagram post, "Can you believe that this was made in only 2 days?

"I reached out to Filipino designer @arwin_meriales04 to create a design of my own and he executed!

"When he offered to get @kuyapawlo to hand paint something at the back I knew straight away that it had to be about the movement revolving racial spite and prejudice!

"Given the slim timeframe we had to get it sent from the Philippines to Singapore before I flew out to the US, I’d say this is a HUGE win for everyone!

"We got our message across loud and clear! Thanks for roaring back at us with love and praise!!! [Singapore flag and lion emojis]"

Toward the end of her caption, Bernadette said Arwin also designed her two other dresses for the Miss Universe pageant.

"Kudos to Arwin for making this along with 2 other dresses in preparation for my time in @missuniverse! He was actually juggling his examinations at that time so I really appreciate his undeniably impressive work ethic!"

Meanwhile, Arwin revealed on Instagram that he was initially hesitant to accept the project due to time constraints.

But he liked the idea of being part of a global cause.

Arwin wrote, "My piece got into the Miss Universe stage! [emoji]

"When Bernadette asked me to make her national costume, I have to be honest, I thought it's not going to work. I only had 2 days to make it.

"Considering that I'm still studying, I thought it's not going to work so I was hesitant to accept it.

"What made me say Yes? It's not just a national costume. It's a 'STATEMENT and PROTEST' to stop asian hate. Who wouldn't want to be a part of such cause.

"Thank you so much to the Miss Universe Singapore Organization and @bernadettebelle. This is definitely one for the books. [emojis]

"Hand-painted Cape by Paulo Pilapil Espinosa @kuyapawlo Thank you for helping me."

Paulo's post revealed that using the slogan was Bernadette's concept.

Part of his caption read, "Bernadette is not just a candidate. She's a woman with a mission. It was her idea to make the NatCos competition a way to raise awareness for a very relevant cause.

"I think we can all agree that Bernadette was able to raise the message to the Universe, loud and clear. #StopAsianHate Wishing you all the best!"