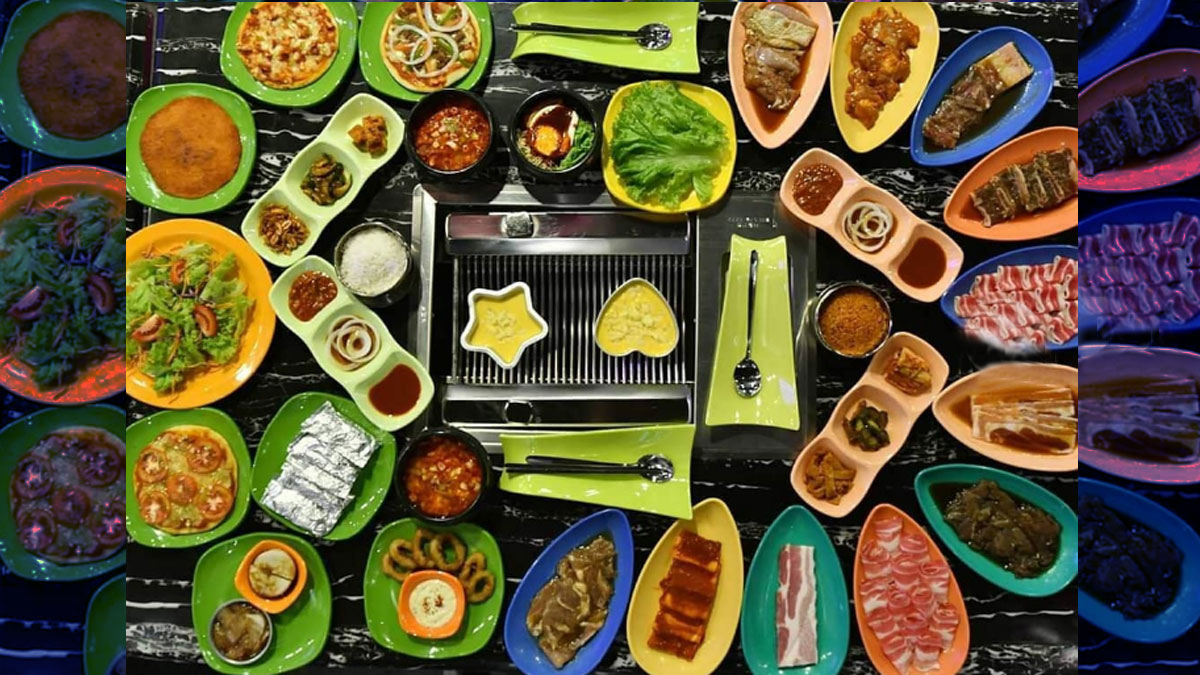 Experience Seoul just a few rides from your home with these must-try Korean restaurants.
PHOTO/S: @kpub_bbq_tiendesitas on Instagram

From BTS and BlackPink's bouncy pop tunes to the kilig scenes in the TV series Goblin and Descendants of the Sun, there are many reasons to go crazy over South Korea's rich culture.

In the recent years, Pinoys have fallen in love with Korean dishes, just look at the influx of Samgyupsal restaurants.

PEP.ph (Philippine Entertainment Portal) lists five must-try Korean restaurants where you can relish being a fangirl or fanboy of Seoul just a few miles from your home.

With its double-deck cabins and interiors decorated with pops of color, SHP Bibimbab Café and Restaurant is for the K-Pop fan who loves all things cute, cozy, and sweet. 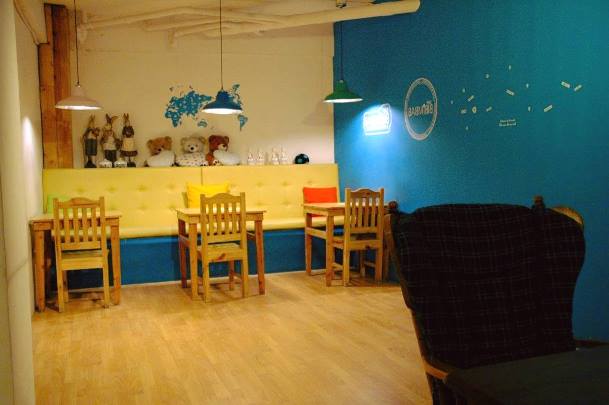 Each of their cubicles has teddy bears you can snuggle with as you enjoy their best-selling beef, chicken, spam, tuna, or bulgogi bibimbap priced at PHP170 to PHP210.

They also offer other rice meals like bulgogi deopbab, chicken mayo, and kimchi fried rice for PHP170 to PHP210.

For drinks, they have coffee, blended ice, and yogurt smoothies starting at PHP130.

Korean Fried Chicken has been playing a big role in Seoul's food industry, so much that it was also featured in the K-Drama series Weightlifting Fairy Kim Bok Joo, Goblin, and Love From The Star.

Found in almost every corner of Seoul, this everyday dish is extraordinary because it is crunchy, spicy, and, as the New York Times describes it, "perfectly non-greasy."

Wanting to share this and other Korean delicacies with Filipinos, TV personality Grace Lee and her mother built Kko Kko, a restaurant dubbed as "Home of the Seoul Chicken."

The restaurant is also a must-try for cheese lovers because they serve Chi-Z Pongdang, a big plate of cheese fondue, chicken, fries, and onion rings priced from PHP598 to PHP998.

Head over to Jumong if you're craving for authentic Korean food.

Owned by a Korean resident, this hole-in-the-wall in Poblacion serves home-cooked Korean dishes in a homey atmosphere.

It also has shabu-shabu and meats like Samgyupsal, Seangbulgogi, and Kochujang Chicken with prices starting at PHP300.

Because it's open 24 hours daily, the place is always ready for your late-night cravings.

K-Pub BBQ in Tiendesitas is the perfect spot for Friday nights with your barkada.

It recently opened its biggest K-Pub BBQ branch in the Philippines on July 21, 2019. 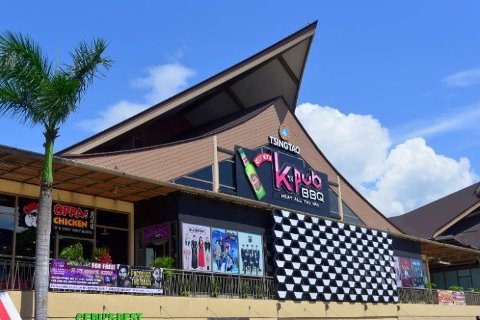 Like its other branches, the one in Tiendesitas offers unlimited barbeque or Samgyeopsal, cheese dip, and Tsingtao beer for just PHP499.

Grabbing another bottle of ice-cold beer from the restaurant's Green Room or Heineken bar also adds more flavor to your night. 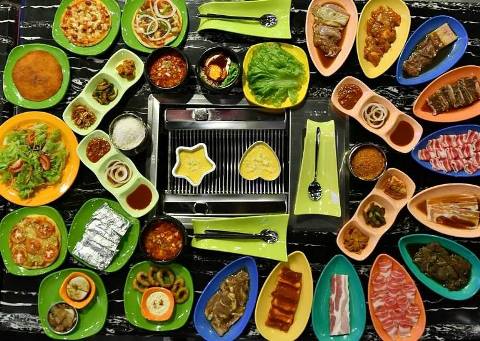 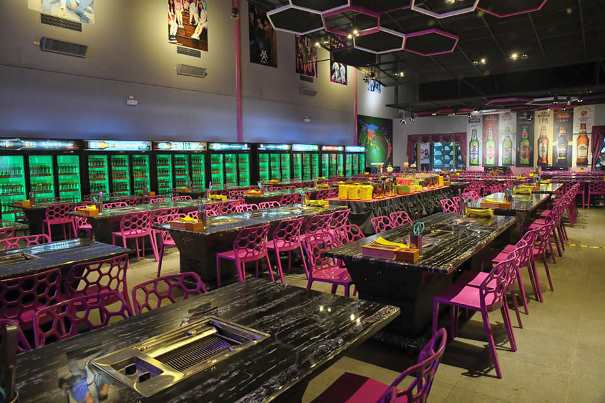 Aside from its food and Green Room, what sets K-Pub BBQ Tiendesitas apart from other Korean Barbeque joints is the complete K-Pop experience it offers its customers.

Its interiors are as jazzy as the Korean pop groups pictured high on its walls.

It has two function rooms that you can use for events and a stage where local bands perform every weekend. 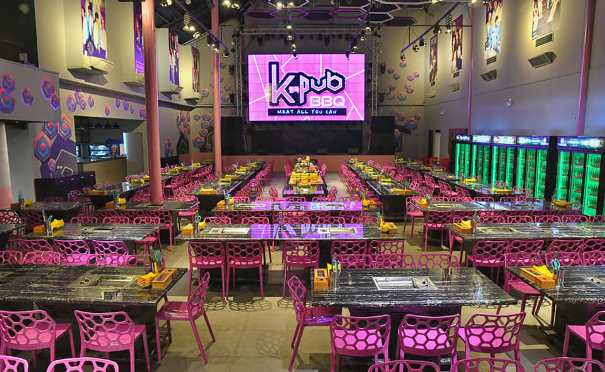 K-Pub BBQ Tiendesitas is also the only Samgyeupsal restaurant in the country with a giant high-definition video wall that plays K-Pop music videos while you enjoy your meal till the wee hours of the night.

Check it out on the second floor of Building B, Tiendesitas Food Village, Ortigas East, Pasig City.

If you're craving for a sweet treat, Kiss the Tiramisu is set to exceed your expectations.

Even before it flew from Seoul to Manila on October 13, 2017, the famous dessert shop has already been satisfying the taste buds of its customers in Hong Kong, Malaysia, Singapore, Thailand, and Canada.

It has been known for selling rich and creamy Tiramisu-flavored ice cream that comes in variants such as Original Tiramisu (PHP265), Matcha Tiramisu (PHHP285), Mango Bravo (PHP250) and Injeolmi or Korean rice cake (PHP265).

These luscious sundaes aren't just a treat for your sweet tooth, but for your eyes, too, because they come in gold goblets that you can take home!

Get your sweet fix by heading to the lower ground floor of Trinoma Mall in Quezon City, or to Three Central Building in Salcedo Village, Makati City.