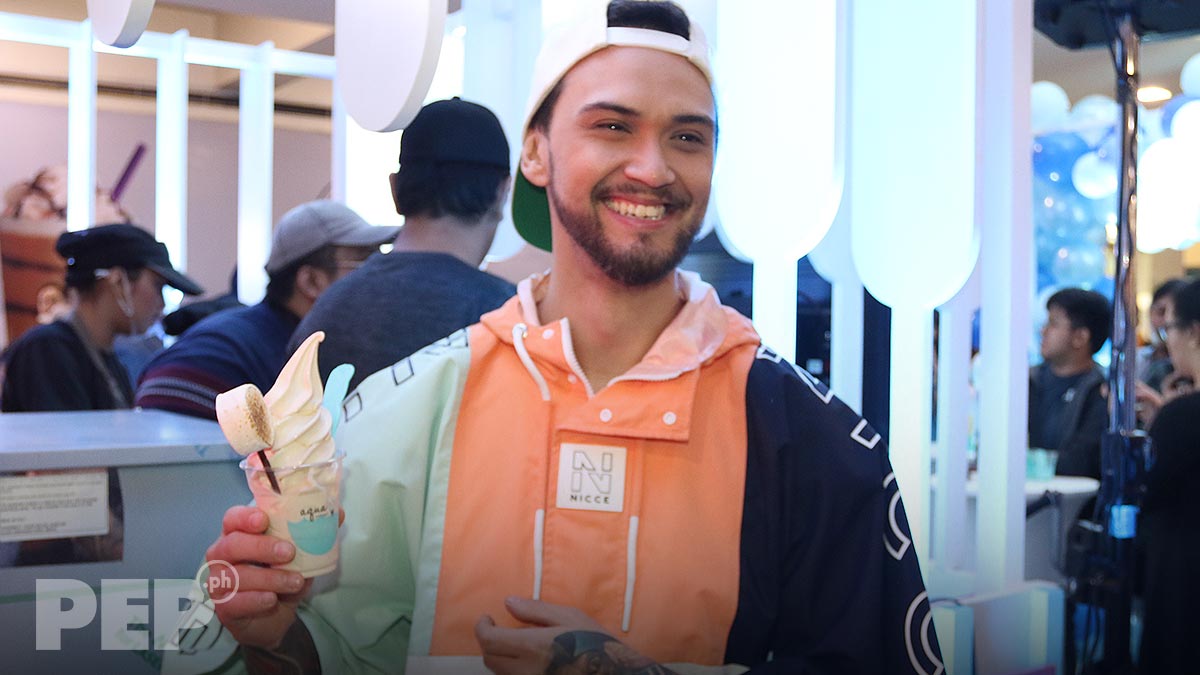 Billy Crawford is the latest celebrity to make a foray into business.

In his interview with PEP.ph and other members of the press, Billy talked about his new venture, which has been running for a few months before Billy decided to join the team.

"Me, as an artist, we actually just crossed paths with other people, as well.

"We actually talked about joining a business from before pa and hindi lang nagkakatuloy or ano.

"We like sweets, ice cream kasi mainit dito etc. and you know… It’s a family thing."

Aqua S actually originated from Sydney, Australia. The soft-serve ice cream business was established in 2015. Since then, the brand has been expanding globally.

"It’s actually quite popular in Sydney now," Oli said. "They also have a store in the U.S., China, Japan, and Cambodia.

"The owners are actually Chinese who live in Sydney. They visited Japan one day and then played around with flavors, and loving sea and the salt.

Members of the press asked why they picked SM North EDSA as the first location of the store and Oli said the main reason was foot traffic.

He explained, "I think it’s a very good market to capture most of the Filipinos loving ice cream or sweets.

"And true to the taste of Filipinos, we love sweets, di ba? Even ordinary food that we eat, we love it sweet. That’s why we have sweet spaghetti, something like that."

Billy and Oli expressed their excitement about their wide range of ice cream flavors. Currently, they are serving Snickers and Dulce de Leche flavors, but Billy said Aqua S changes their menu every 15 days. Billy noted that the sea salt flavor is a staple.

He reiterated, "There’s over 140 plus flavors so imagine, every 15th, papalitan yung flavors, but sea salt yung hindi mawawala."

Asked about his favorite flavor, he answered, "Snickers and Sea Salt siguro dahil it’s a good balance if you mix it. Sometimes ice cream, when you have one flavor, it becomes overpowering.

"And then I use that as parang my spoon. You can get creative with ice cream. That’s the greatest part about having this."

Billy has always valued the importance of starting a business as another source of income, especially for celebrities like him. Like other entrepreneurs, Billy also saved up and made sacrifices for this business venture.

The Kapamilya actor/host also made sure to involve his wife, Coleen Garcia, before he made the decision.

He said, "Business [is] something that people take lightly sometimes, but no, it’s business for a reason. I try to deal with it with my wife and, obviously, to do it properly. It’s not my first and hopefully not my last."

Billy also noted food-related business will always have an active market, which is why he went for Aqua S.

He further explained, "All the industries are inconsistent kasi, you know. Siguro the best thing to do here in the Philippines—kasi matakaw tayo—the food, the restaurants, and all that stuff is great when you find that gem of a business.

"If you just have something [to] give to the Filipino market and they like it sa panlasa natin, dun talaga tayo umaasenso, di ba?

"I mean, ultimo mga karinderya, diyan nag-i-start yung mga negosyo from time to time and it escalates into something else."

He added, "Siguro ako, I want to invest in something I believe. I don’t want to be just an endorser, just because I’m paid as an endorser.

Like other entrepreneurs, Billy also had his share of failures, but the 37-year-old Viva talent makes sure to learn from them and not repeat the same mistakes.

"I’ve made my mistakes before, trial and error. And I won’t make the same mistakes again. Mahirap din kasi makahanap ng loyal and trustworthy people to work with.

"I’m blessed to have Oli as a dear friend to guide me as well as tell me which is good or not."

One piece of advice he told PEP.ph when it comes to starting a business is to build relationships with trustworthy people.

"It’s better to get to know the relationships first, to work with the people you need to work with para maplano because everything needs to be mapped out and planned beforehand."