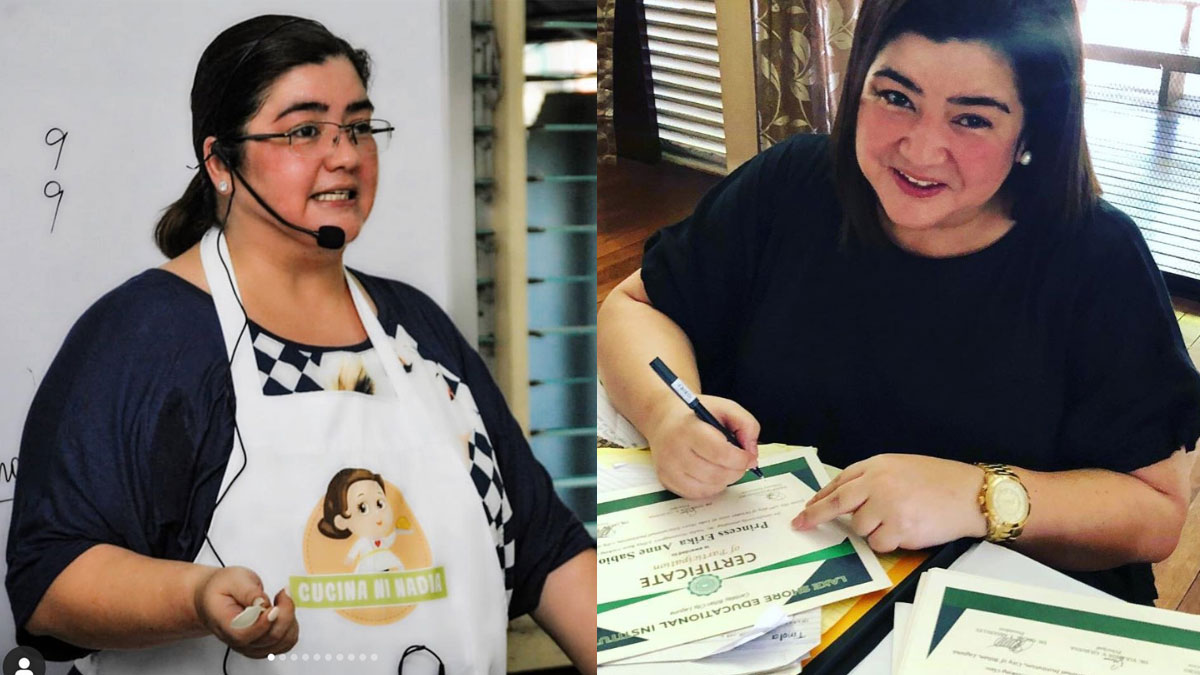 It's one thing for a culinary enthusiast to learn the secrets of the trade and gain the kitchen confidence to cook any dish on a whim.

But it takes another level of wisdom and maturity to share that same hard-earned knowledge to deserving students, regardless of age or skill level.

Twice a week, within a span of five weeks, former actress-turned-kitchen warrior Nadia Montenegro would travel all the way to Laguna to share her culinary knowledge to budding grade school chefs.

“Then nag-Cucina Ni Nadia na ako, nag-catering na ako then after that, we decided to do YouTube.

“And then naimbitahan ako dun sa Lake Shore to share my knowledge on cooking basics.”

Nadia was personally invited by Oscar Arguelles, owner of Biñan, Laguna-based Lake Shore Educational Institution, to conduct her five-week cooking classes for the kids and teens.

“So, parang naging ganun na, and then nung na-invite ako, lalo akong na-excite. So, pinuntahan ko yung mentor ko sa CCA [Center for Culinary Arts], si Chef Philip Golding, and I asked him for some tips on the right wy to do the basics.

The cooking demos ran approximately one and a half hours per session.

Nadia recalls, “We started with the soups, stocks and yung mga broths, and then we did the herbs and spices, condiments.

“How to fry, how to boil, how to steam—yung ganun.

“Na-impress naman ako sa kanila. The first day pa lang, I made them do a parang written test for me to be able to know them better through just a piece of paper.

“Ang first question ko was rate your passion for cooking—five for the lowest, ten for the highest. So, from there, nakilala ko na sila.

“And at the end of the course, tinanong ko ulit sa kanila, and nagbago yung passion nila for cooking.

At the end of the fifth week, Nadia shared that almost all her students had "love letters" for her.

“Telling me how happy they were na talagang tumaas yung ano nila, 'tapos yung mga essay nila na how will they adapt to what they’ve learned in their lifetime, sinabi nilang forever na nila akong maaalala.

Nadia is also one of the celebrity participants in the forthcoming MerCCAto sa Abada Community Weekend Market scheduled from November 29-30 and December 6-8 at CCA Manila.

Some of the other confirmed celebrity participants who will be setting up their own food booths include Max Collins, Pancho Magno, Niño & Alonzo Muhlach, Janice de Belen, Alyana Asistio, Anykka Asistio, Daiana Menezes, and Ella Cruz.

Nadia's cookbook, Have I Cooked For You?, contains 50 recipes and testimonies from her close showbiz friends, including Pops Fernandez, Jomari Yllana, Hayden Kho, Jr., Karla Estrada, and showbiz couple Mariel and Robin Padilla.

Cucina Ni Nadia, her YouTube cooking show, which is shown every Friday at 9:00 p.m., is nearing its 100th episode.

"Like, I went to the Hong Kong Food Convention.

"World convention yun. It was four days in Hong Kong.

"Binigyan ako ng backstage pass, so I met almost all the Michelin chefs all over the world.

"I was able to interview them. Naikot ko yung buong convention, na yung best seafood in the world, mga wine, yung how to pair this wine—mga ganun,” she recounts

Excerpts from this recent Hong Kong adventure were shown in her show.

For her next trip, Nadia plans to attend the Mexico Food Convention.