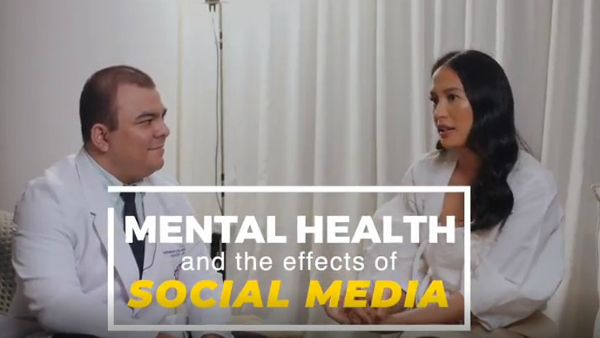 For most people nowadays, life without social media would be challenging.

Imagine not getting updates from your peers back home while you're working abroad, or having to text your connections one by one to ask if they're interested in your freelance services. It can be hard.

Social media has become a necessity for some because of instances like these.

Yet for others who use it for purposes other than being a utility, it could become an addiction.

Social media addiction involves the habitual use of social media apps to the point that the user develops psychological disorders, like anxiety, depression, loneliness, and attention-deficit or hyperactivity disorder.

The Washington Post also explains that people with this condition use social media habitually enough, "that it spills over into other areas of their lives.

"It results in behavior that is problematic and dangerous, such as checking social media while driving."

As an advocate against social media addiction, Isabelle Daza got down to the nitty-gritty of the issue and produced a 10-minute video discussing ways on how you can avoid the condition.

Together, they discussed what phone addiction is and how social media, in particular, is affecting people's mental health.

It was uploaded using her IGTV (Instagram TV) account on July 13, 2019, as the first installment of her three-part series about the issue.

Three part interview with a psychologist. 1/3 we discuss phone addiction and how social media is dictatating our behavior.

In the 10-minute clip, Belle asked how the habit of being online 24/7 is developed, and how to deal with it.

Belle asked, "Let’s talk about the pressure. Why is there such pressure to be part of social media?"

To which Tofi answered, "Because primarily, Filipinos are very sociable individuals.

"We don't want to be left out. Now when Facebook opened up, everyone wants to be part of it.

"What happens here is that we now try to identify with the people we follow on Facebook.

"We now want to achieve a level or status that they are experiencing. And because of that, we are also pushing ourselves too much to be in that status."

He also said that if you are not mentally and emotionally strong, you will likely fall into the trap of self-doubt.

"You now become a little bit annoyed [about] who you are, you don't become satisfied with what you have and the depression will settle in.

"Sometimes it can be positive. It can motivate you to work a little bit harder.

"Sometimes it can also develop a lifestyle that you cannot sustain...

"And unfortunately, for us Filipinos, we also have this attitude of 'one-upmanship.'"

And like many social media users, Belle also wanted to know if phone addiction is "a real thing" and not just a confusing phase that some people go through.

"And this happens with people who just can't let go of their gadgets. And I can't blame them because primarily, from a biological perspective, we have a part of our brain called the Limbic system that gets a little bit stimulated.

"The dopamine is the chemical that it releases and because of that sudden surge of happy hormones, you feel so relieved, so happy about what we do, so reinforced of our action that we try to repeat it as much as we could."

Phone addiction, according to the psychologist, could really affect how you value self-worth.

He explained, "The only problem is that social media also promotes a sense of validation from other people...

"From there, the person starts to doubt himself, the person then tries to stir up certain things that are already technically stable with him, and that's where the disorder starts."

Belle concluded the video by admitting that she, too, had social media anxiety, and by continuously standing up against it, she's starting to live a more meaningful life.

She shared, "You know, I experience social media anxiety and I'm battling with it.

"And now I feel like I’m in a much better place. I feel a little bit more safe."

Dr. Tofi also advised viewers to practice a level-headed approach to the negative comments you may get from social media.

He said, "At the end of the day, this is what you tell [yourself], 'I do not have any control of what they think. It’s their opinion.

"At the end of the day, it is me who knows the truth about who I am and that is what I’m going to believe in.'"

Belle has been consistently enlightening her followers on the effects of using social media moderately since March 29, 2019.

On that day, Belle posted a video on her Instagram account that showed how her son, Balthazar, would see her spending their day together while she was mostly focused on her mobile phone.

The caption read, "Created this video as a reminder to myself to be present and that not everything has to be recorded.

"I realized that there are times I chose to be on my phone rather than spend quality time with my son..."

Since then, Belle has been actively encouraging everyone to avoid spending too much time on social media, and, instead, use the time to look after your kids and make them feel loved.

Created this video as a reminder to myself to be present and that not everything has to be recorded. I realized that there are times I chose to be on my phone rather than spend quality time with my son; I underestimate the amount of times he sees my phone and not my actual face. Trying to be better and lessen my average phone usage ????#MomGuiltisREAL #NotAnAd