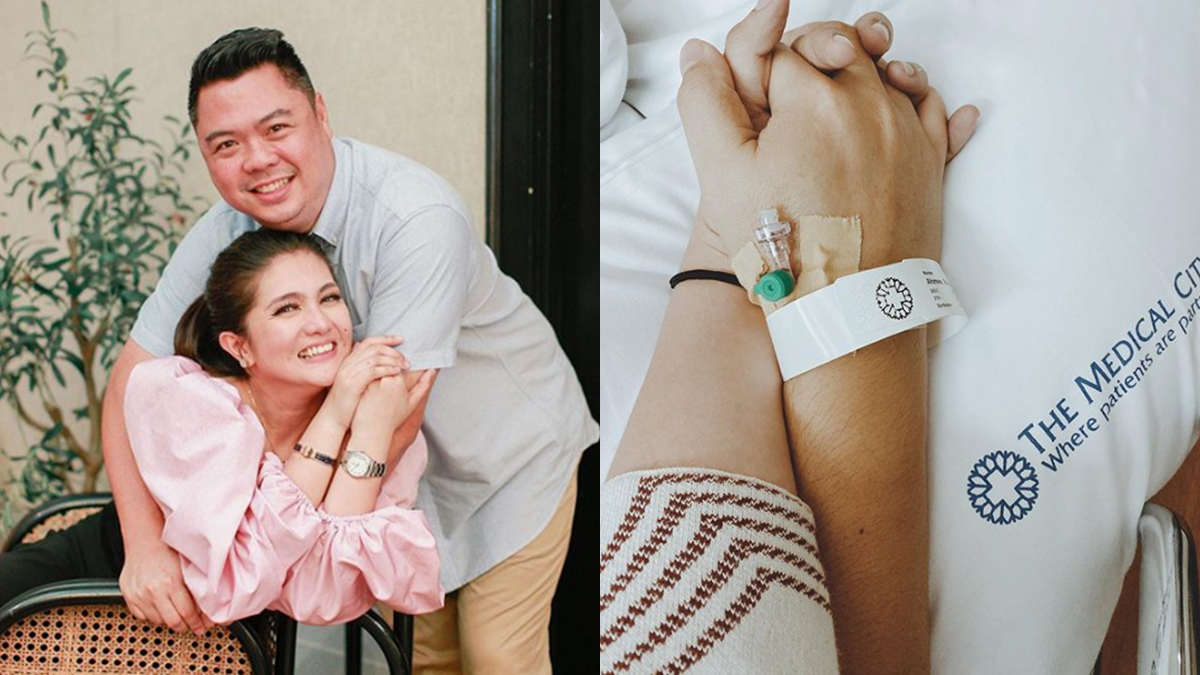 Dimples Romana with husband Boyet Ahmee, the love of her life who, to her great relief, is on his way to full recovery from severe sleep apnea.
PHOTO/S: @adashofjamie / @dimplesromana on Instagram

Dimples Romana had the biggest scare of her life on Tuesday night, December 3.

Her husband Boyet Ahmee woke up in the middle of the night “choking and throwing up blood,” and Dimples acted immediately to bring him to the hospital.

In an Instagram post early today, December 4,The Kadenang Ginto star wrote, "I thought I’d lose this one today...

"I have never been so scared in my life, tanggal ang pagka Daniela Mondragon ko kanina.

"The love of my life @boyetahmee woke up choking and throwing up blood, (he ate a little more than what he’s supposed to the night before. Dapat soft diet pa kasi sya. Hindi pa fully healed his throat from the operation... lesson learned, make sure to follow your doctor’s instructions after operation)...

"So much of the blood, nanghina ng malala yung mga tuhod ko whole holding up the bags for him to throw up in while we were home, habang Papunta sa hospital and while inside the ER of @themedicalcity...

"...thankfully his good doctors came right away (this was around 230am hiyang hiya ako sa doctors nya to come in so early but they still came to see him super fast, thank you so so much docs) and decided to bring him to the OR to stop the bleeding and we were right on time."

Boyet underwent surgery last November 26, Tuesday, to treat his severe sleep apnea, which is defined by webMD.com as "a serious sleep disorder that occurs when a person's breathing is interrupted during sleep."

The procedure involved removing excess tissue in his throat to make the air passage wider.

In her post, Dimples thanked all the staff and doctors of The Medical City, "Thank you to the staff, customer service representatives, doctors and nurses of @themedicalcity I don’t know what I would’ve done without all your help.

"My hubby’s doctor spoke to me in his most calming voice after the emergency operation, telling me how everything went, how we’re going to move forward after this. Salamat po sa inyo.

"Mag isa ako when we brought my hubby here to the hospital up until the time he came out from the OR then the recovery room Pero not once did I feel alone because you all checked on me once in a while and made sure I had everything I need."

Dimples also expressed her gratitude to the staff and crew of Kadenang Ginto as well as to her own family.

She wrote, "To my Kadenang Ginto family, thank you for understanding that I couldn’t shoot today. Family first. Always.

"Salamat for all the messages from my producers, directors, writers and co actors, Sobrang naramdaman kong hindi ako nagiisa.

"To mommy @eaahmee and @happygabby26 for helping me out all throughout the day. Kahit papano nakatulog ako habang nagbabantay. Health is wealth."

Boyet is now recovering from the emergency surgery.

Dimples said, "Thankfully, Boyet is now stable and just waiting to get a bit better before we get discharged.

"Mahal, know that no matter how busy I may get, you will always come first. Love you."

Dimples opened up about her husband's condition during her press launch as endorser of an accident insurance provider on November 28.

"Ayaw ko ng ganun. So always [remember], prevention is better that cure like with anything else."

If left untreated, sleep apnea can increase the risk of health problems, such as high blood pressure, stroke, heart failure, and diabetes, to name a few.