Every mom would probably agree that it’s never easy shedding off that post-pregnancy weight.

According to WebMD, women gain an average of 25 to 35 pounds (or more) during pregnancy.

Losing the bulges after giving birth requires a lot of effort as moms juggle their time taking care of their newborn and their other responsibilities.

Throughout her career in showbiz, she was "chubby." Remember her classic "Goodbye, Carlo" hotdog commercial in the late ‘90s?

It became even more challenging after she gave birth to daughter Elliana.

So in 2012, Chantal got into yoga and managed to shed off at least 60 pounds from her weight of 182 pounds—her heaviest.

But getting fit was not easy.

"I've done everything that I can to be in my best shape, and the problem areas are still there." 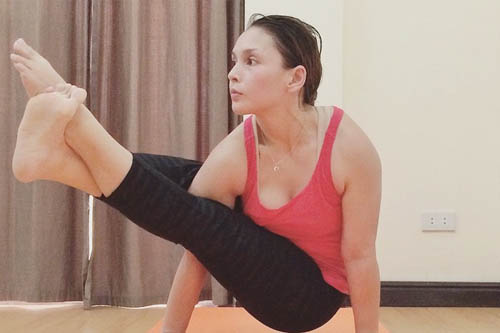 Chantal continued, "So I was at a point na, 'Okay, I'm just gonna accept that I have sagging skin and a big belly and big thighs.'

"I was doing the physical exercise, I was consciously trying not to eat so much.

"I was at that point I was working on myself, but it wasn't producing the results that I wanted.

But this mom was not ready to give up just yet, so last February, she tried the non-invasive treatments of a slimming center, which, according to her, helped her waist shrink from 28 to 25 inches, and the size of her clothes go down from size eight to size two.

Chantal recalled, "I was kinda skeptical because I've been working on my legs all my life 'cause I was born with talagang big thighs.

"And then one day, I wake up, I stood up, and then I felt like I was walking funny.

"And then, I realized that what was different was my thighs weren't rubbing against each other!" she exclaimed.

TREAT YOURSELF. One of the most important things she learned as a mom is that it’s okay to splurge on yourself once in a while.

She explained, "If you're a Filipina mother, working mother, and you spend on yourself...people are gonna tell you, 'Parang ang selfish mo naman, ginastusan mo yung sarili mo.'

"But it's not a bad thing to take care of yourself, you know."

“It's a good investment."

The former TGIS star further noted that moms should not feel guilty about taking care of themselves.

"There's so much judgement.

“But in fact, we work better when we feel better about ourselves, di ba?

"When you have your own kid, and you're working and trying to raise your child or whatever, it doesn't mean na pababayaan mo na yung sarili mo.

"It doesn't mean na you let yourself go because that's even more na dapat you should be taking care of yourself.

"Because you're spreading yourself thin all the time."