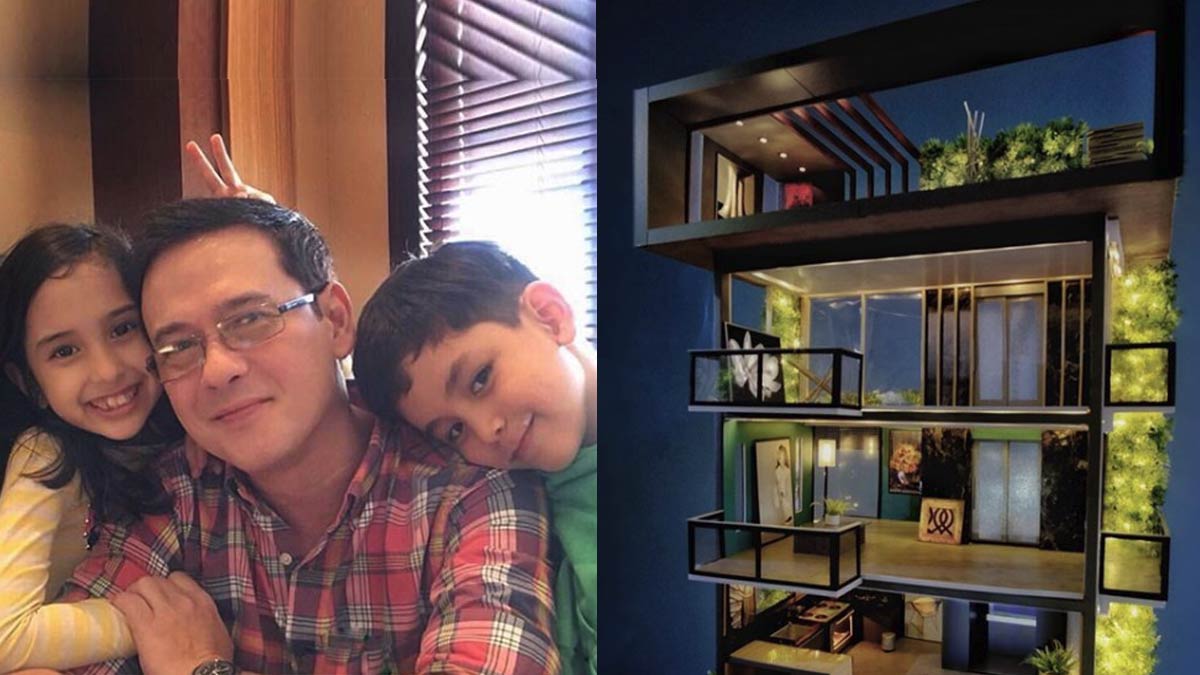 Raymond Lauchengco with his kids Nat (in yellow shirt) and David (in green). The father of two built a modern doll house for daughter. It has running electricity and a functioning elevator.
PHOTO/S: @raymondlauchengco on Instagram

Raymond Lauchengo posts on social media his latest labor of love: a doll house for his nine-year-old daughter Natalie Grace he himself made.

The former '80s matinee idol writes on Instagram (July 21), "After two and a half months, Nat's mini condo/ doll house is finally done!

"I hope that every time Nat looks at it she will realize how much I love her."

The father of two does not forget his seven-year-old son, "You're next, David."

The doll house, or "mini condo" as Raymond puts it, is a four-story condominium complete with a roof deck, a vertical garden, a built-in kitchen set, and a functioning elevator.

The mini condo even has running electricity, which is powered by three AA batteries.

The project has reminded Raymond of his grandfather, who used to build toys for him.

On Facebook, the OPM artist recounts an instance when his grandfather made a boat for him from scratch.

He had wanted to get the work done fast so he could play and was impatient with his grandfather—as Nat had been with Raymond during the making of her dollhouse.

But like his grandfather years after, Raymond took his time to create a "masterpiece."

His Facebook post reads: "I'll never forget my grandfather. He was a jedi in carpentry and mechanics.

"His love language to me was building all sorts of cool things.

"One day, when I was eight, it rained really hard and I saw kids playing in the street.

"They had pieces of scrap which they used as boats, racing them on the current of flood water that was rushing down the street.

"I wanted to play with them too, so I went to my grandfather and asked if he had anything I could use as a boat.

"He looked at me with a glint in his eye and asked me to go with him to the garage which was also his workshop.

"I thought he would find me a light piece of wood and that I'd be playing in the rain with the other kids in no time.

"Well, he did find a piece of wood, except that it was about five inches thick and almost two feet long.

"Then, to my surprise, he opened his tool cabinet, took out a hammer and chisel, and started chiseling away."

He "was young and impatient" then and looking back now, Raymond realizes that the "perfectly made boat" is "a beautiful memory of how much my grandfather loved me."

The dollhouse is also an ode of sorts to his grandfather and, in the future, a "beautiful memory" to his daughter.

He says, "I suppose that's why I like to make things for my kids.

"A lot of people have expressed their surprise as to why I'm building my daughter a mini condo with working lights, a functional elevator, sliding doors, modular kitchen, etc.

"They say all sorts of nice things, for which I'm grateful, and compliment me for my patience.

"Thing is, I'm not a patient person, I just have all these wonderful memories of my grandfather and how well he made things.

"And I'd like to be even half as good as he was.

"So now the roles are reversed, and I can see Nat getting impatient because the mini condo is taking so long to build.

"When I do things over because I think something I made wasn't good enough, she puts both hands on her little head and says-'oh dada, why are you repeating it? It was already perfect!'

"When she does that I just look at her with a smile, and hope that one day when she is older, she too will have a beautiful memory of how much I love her."