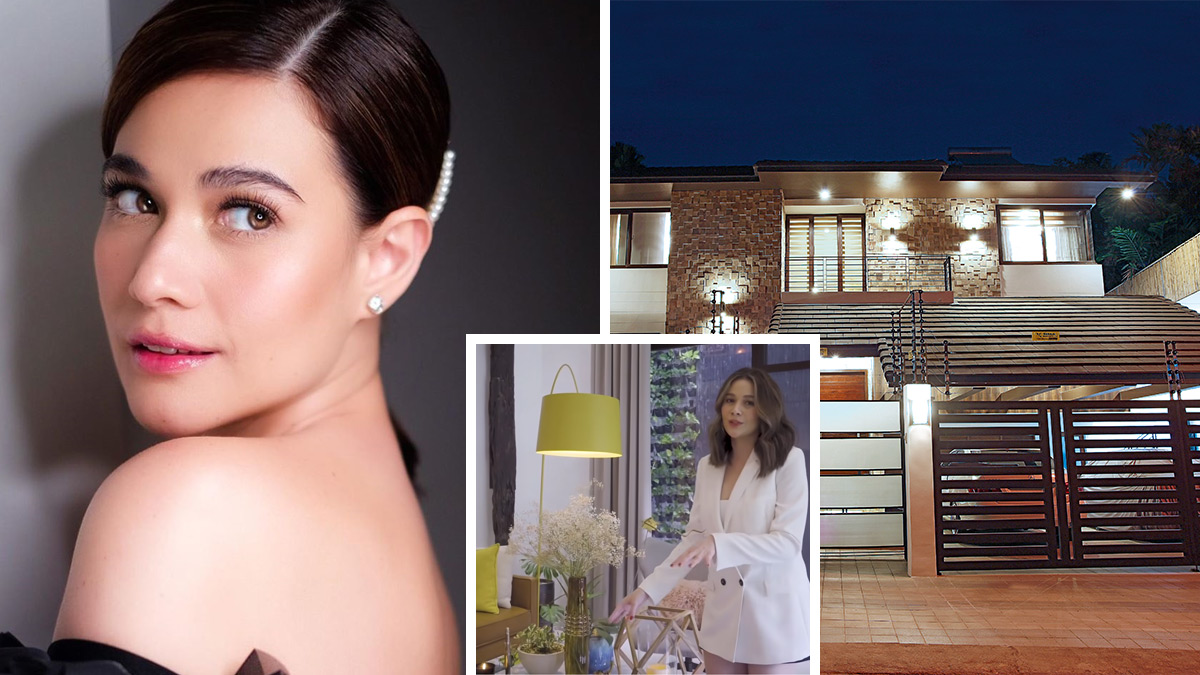 Bea Alonzo has taken her YouTube subscribers inside her newly renovated house in Quezon City.

In this two-part virtual tour of her home that was uploaded on September 26 and October 3, Bea talked about how her once "Urban Asian Glam" home has been transformed into a cozier place.

The first time she let her fans into her home was in July 2013 through the colorful pages of YES! magazine. 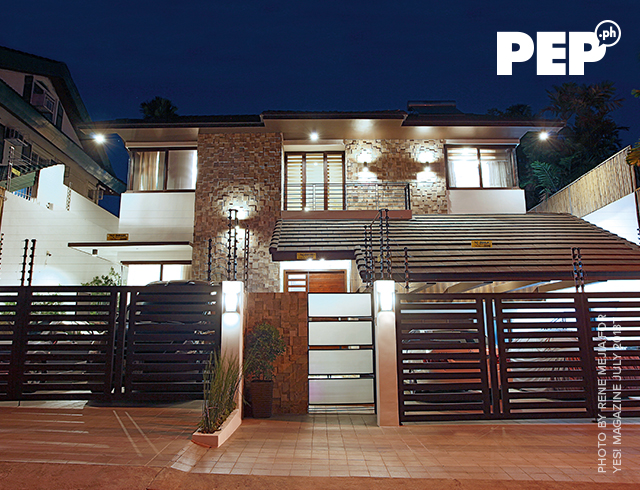 Bea first moved into this house, which has a total floor area of 900 square meters and lot area of 600 square meters, in 2012 after living in a condo for six years.

She had it renovated in 2019 by her good friend Jeizele delos Reyes-Go, who also designed its interiors in 2012.

"We should not focus on the theme that much, but focus on how our home makes us feel."

Here are the major changes that PEP.ph (Philippine Entertainment Portal) has spotted.

Guests enter the house through a spacious foyer that Bea has kept as is, except for the repainted chandelier.

In her vlog, she said, "I had it painted black kasi parang gusto ko ng medyo perky and it actually gives me that Philippe Starck look na mura lang, so very practical."

Starck is a French architect and designer. 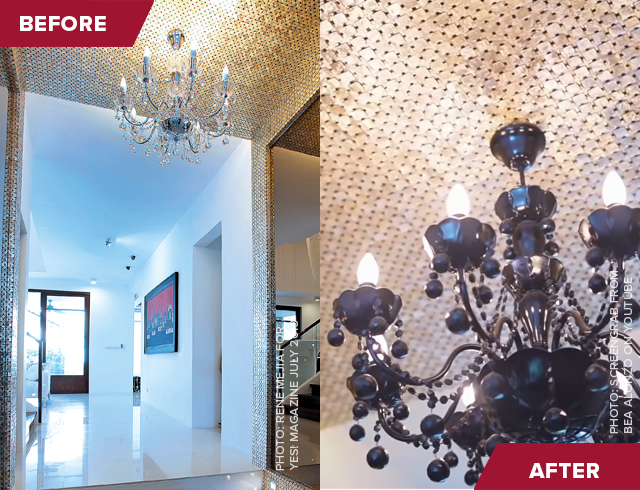 The first room Bea showed her followers was her office.

She said, "I think this is the least used room in the house. I don't do meetings here.

"I don't really work here, but, sometimes, this becomes my glam room.

"And actually, I place all my memorabilia, my awards, my book collection here."

The bulky office table became a ghost office desk, andthe cabinets/drawers behind her table were removed.

For a pop of color, one side of the walls was painted green.

The monotony of the room, broken only by indoor plants and blooms, gave the room an air of Zen-like serenity. 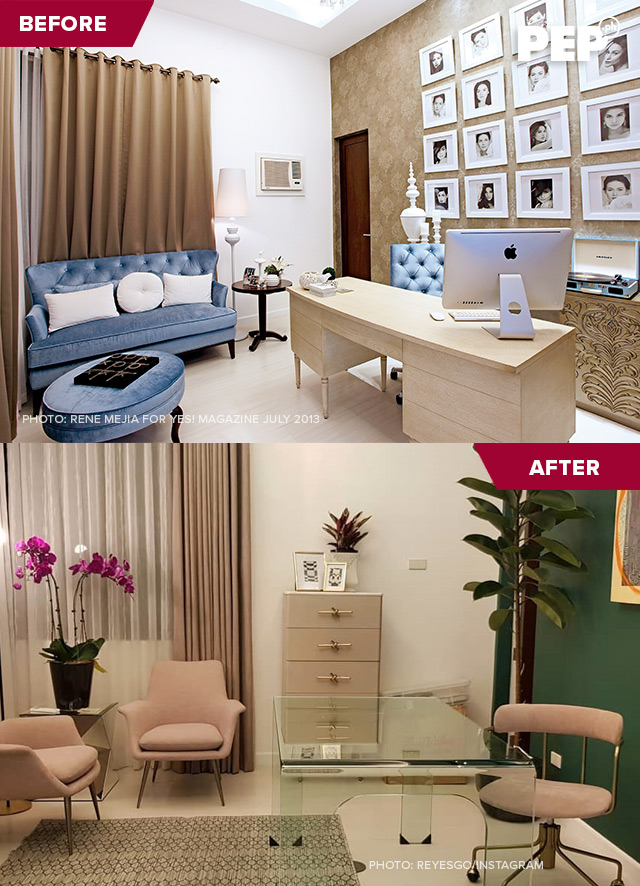 Bea retained the shelves for her books, showbiz memorabilia, and awards. 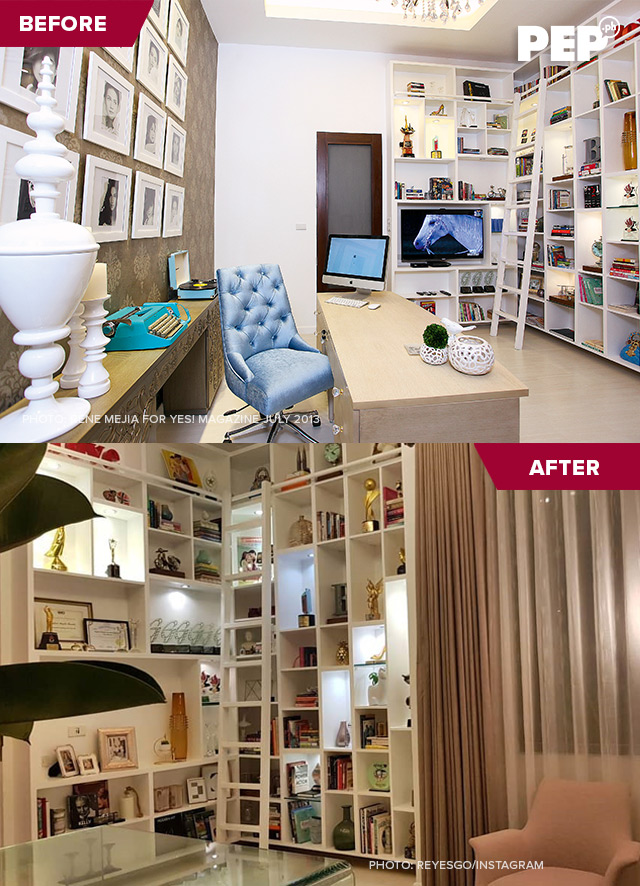 One wall, which was once covered by her collection of solo photos, is now dominated by her huge portrait—an art piece, which was a 2018 collaboration between celebrity fashion photographer Mark Nicdao and French artist Henry Lamy. 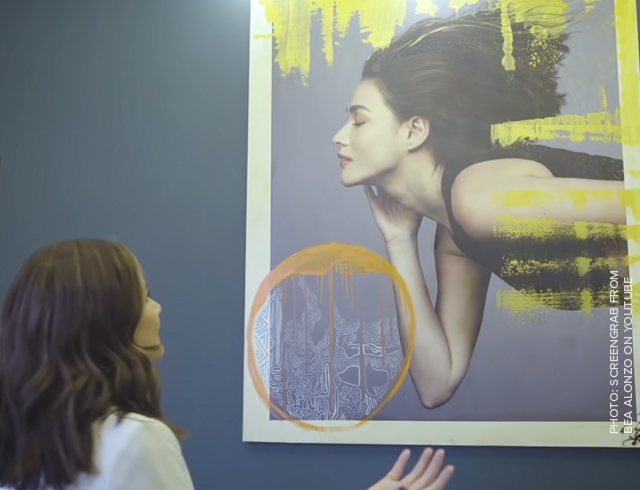 Bea kept the powder room on the first floor untouched for this reason: the sink was made by celebrated pottery artist Augusto "Ugu" Bigyan. 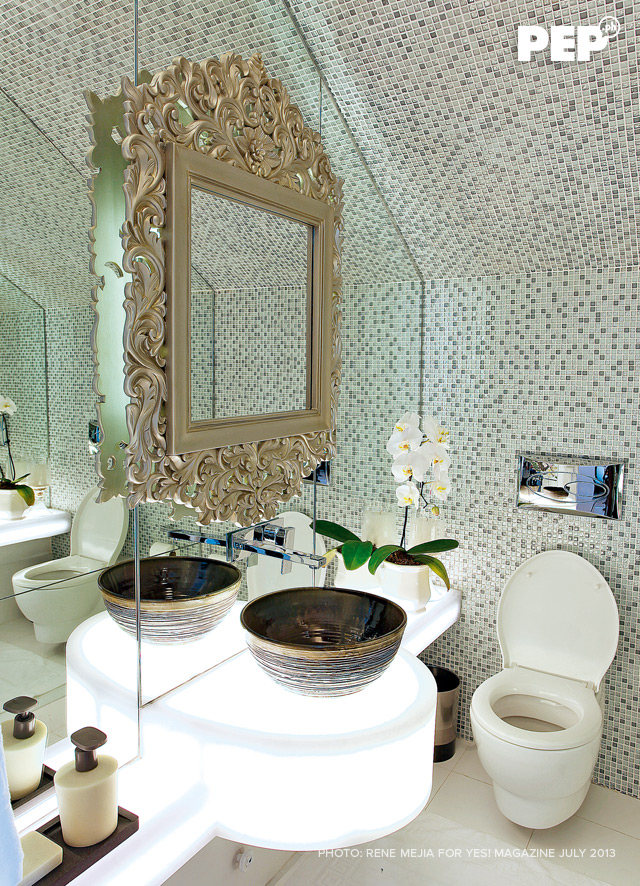 Bea also had her living room redesigned to make it homier.

Bea also did away with the baby grand piano—more an ornament for display as she doesn't know how to use it—and the chess set as she never played the game as well.

One of her favorite things in this room is the yellow Twiggy floor lamp by Foscarini, which she bought from Dimensione.

"Mas hindi nakakatakot upuan yung mga upuan like before, because it used to be all-white.

"So parang mas hindi comfortable yung friends ko to just sit down and be themselves." 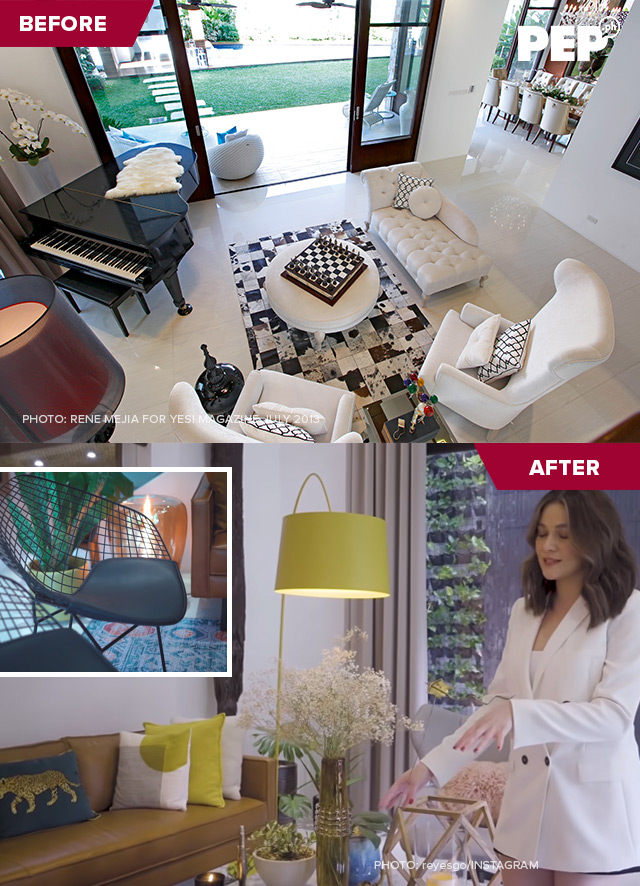 Her other treasured piece in this area is the Michael Cacnio sculpture, a gift from her ex-boyfriend Zanjoe Marudo.

She said, "Ito rin, gustung-gusto ko. This was gifted to me by Zanjoe before.

"Siyempre, when we broke up, I was wondering kung dapat ba tinatanggal yung mga bagay na meron ka from your ex, and I just really find it beautiful, and it just reminds me of our good memories so I felt, why not keep it? So I kept it and it's really nice." 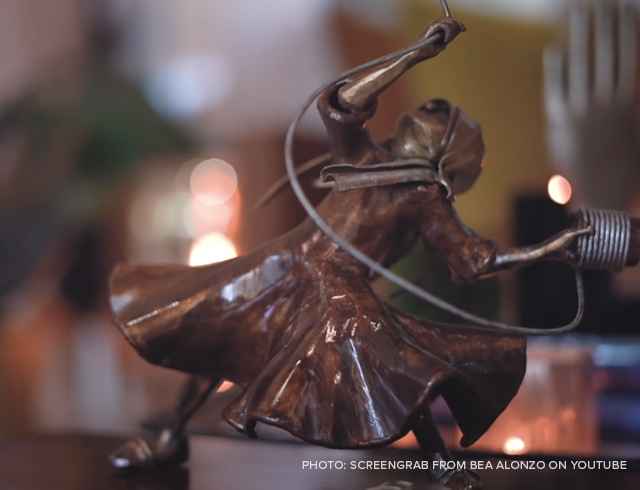 They were replaced with art deco dining chairs in solid acacia wood.

Gone too was the crystal chandelier. The faux antique ceiling light completes the vintage setting of the dining area, which is complemented by the reworked side cabinet pressed against the mirrored wall.

A redesigned sungkaan made by Ugu Bigyan is the accent piece on the dining table. 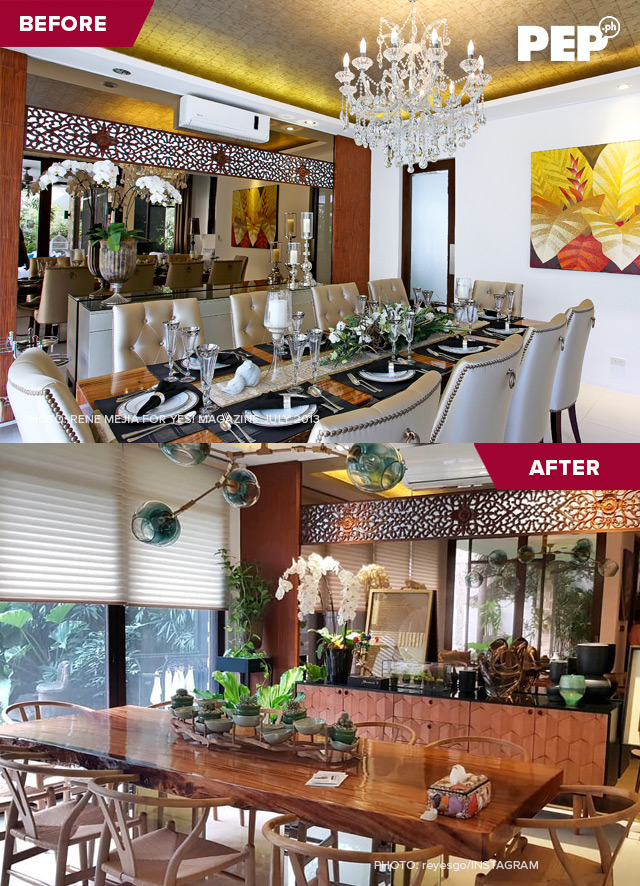 The kitchen is Bea's "most used" part of the house.

She kept the kitchen in its original state, but is now less cluttered with shorter exhaust and without the accent ceiling lights. 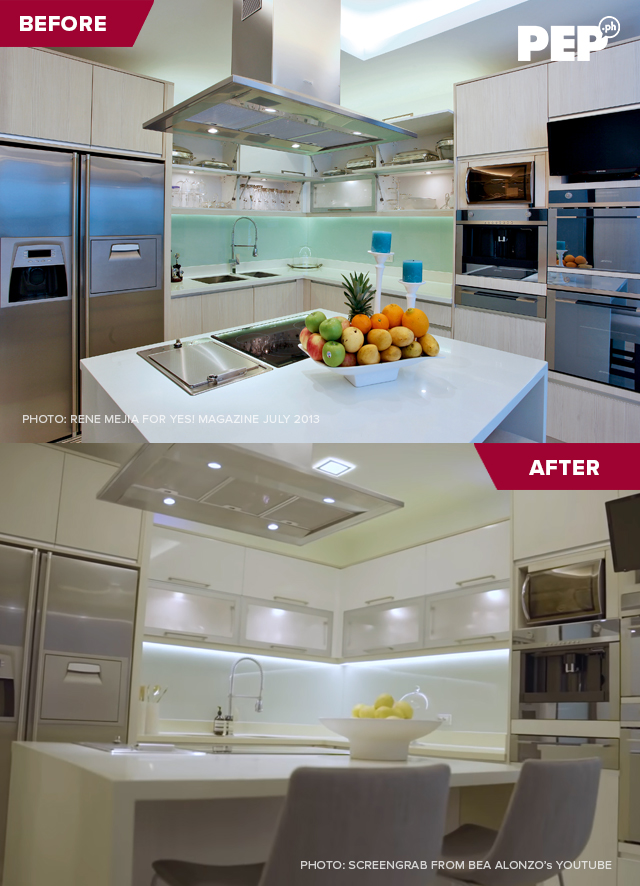 The clear glass of kitchen door and windows is now frosted.

Where there used to be a breakfast nook, a utility cabinet was installed in one corner.

Two stool chairs were added in the center island for quick meals.

The shelves on the left side of the door house her teacup collection. 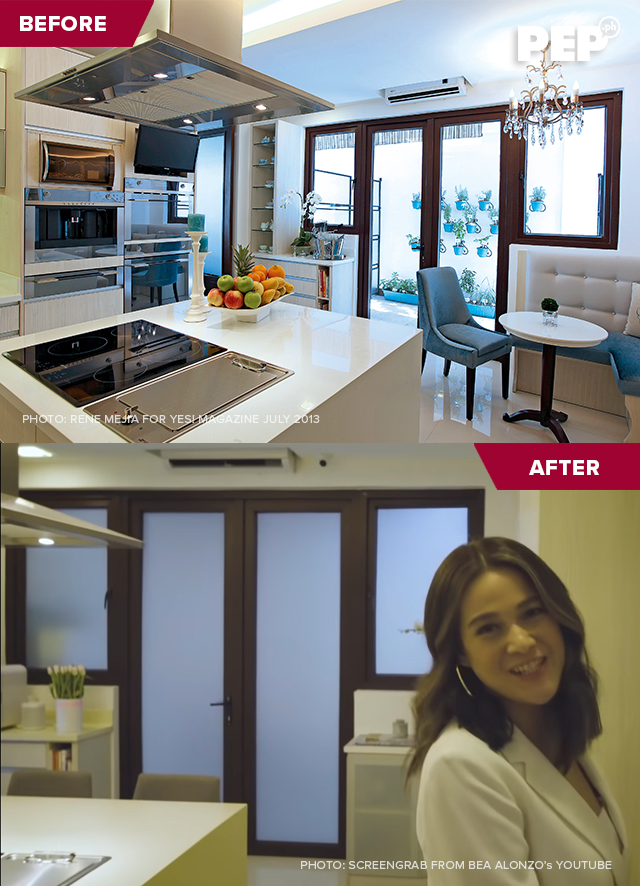 It was turned into a room for her mom Mary Anne Ranollo, who, from time to time, comes for a visit from her home in Zambales.

Bea said, "I placed these French doors because I wanted my mom to be able to relax when she comes over kasi hindi na nakakalakad yung mom ko so naka-wheel chair lang siya.

"At least dito, when she comes over, merong aircon and then may television 'tapos she can just lay down here if she wants to.

"I wanted her to be able to relax. We can also watch movies here together with the family because she no longer can go up to the family room. So this is really for her." 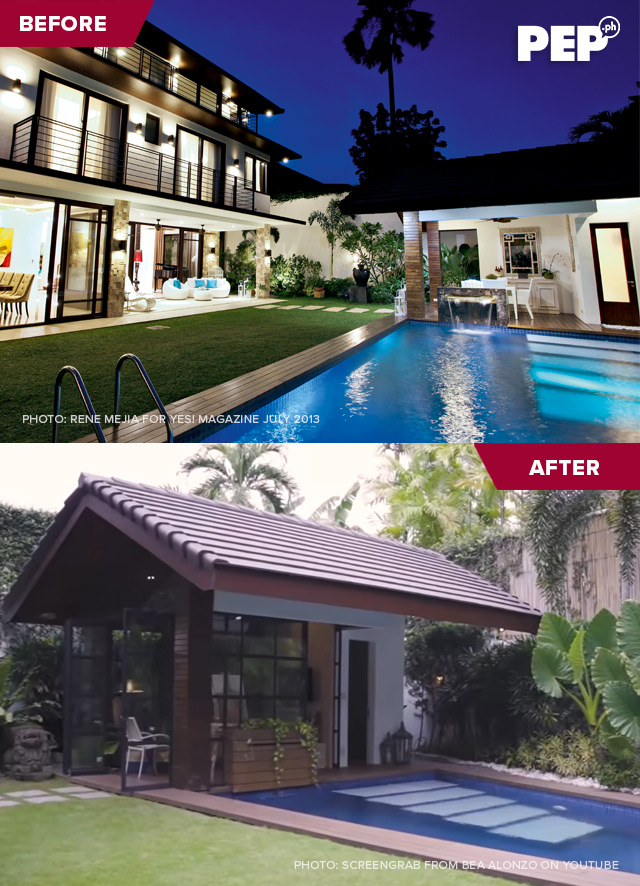 Bea also uses this space as an art studio.

Bea said, "I am not a painter. I'm not good at painting, but I just do it just to relax and to relieve my stress and it's been doing the job very well." 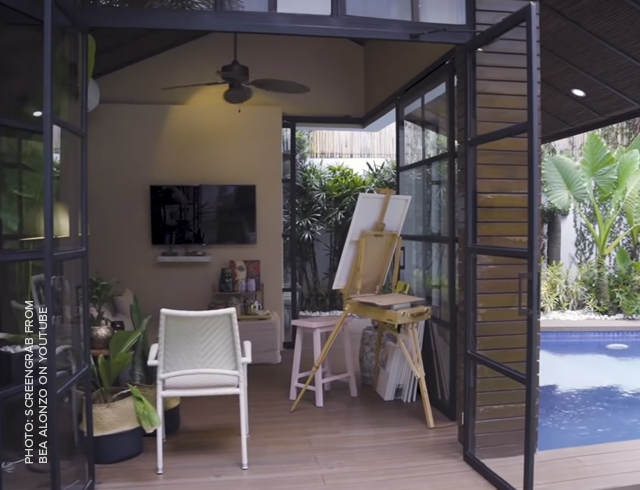 Bea is in love with the Eames chair in the lounge area outside the living room.

That and the Acapulco chairs (insert) were gifts from her close friend Jeremy.

She said, "I wanted to create like a Balinese look dito sa likod ng bahay ko and I think I was able to achieve it naman." 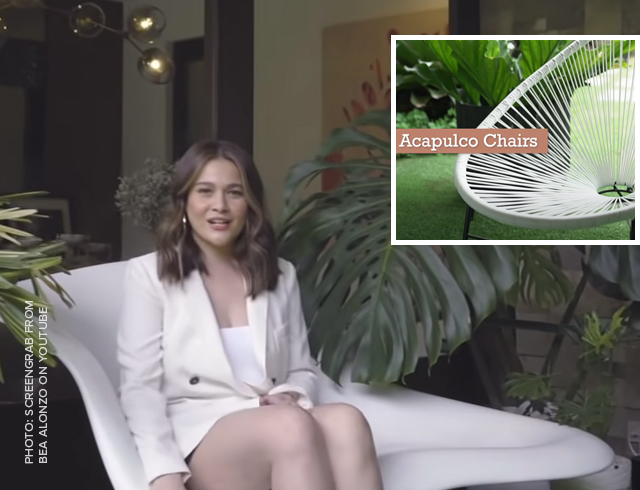 She described, "It's very different from my previous room back in 2012, very bright siya.

"Whites and beige yung theme and it looked like a Ritz Carlton room.

"Right now, parang gusto ko na mas chill, mas humble, and mas functional because this is the room where I spend most of my time in. 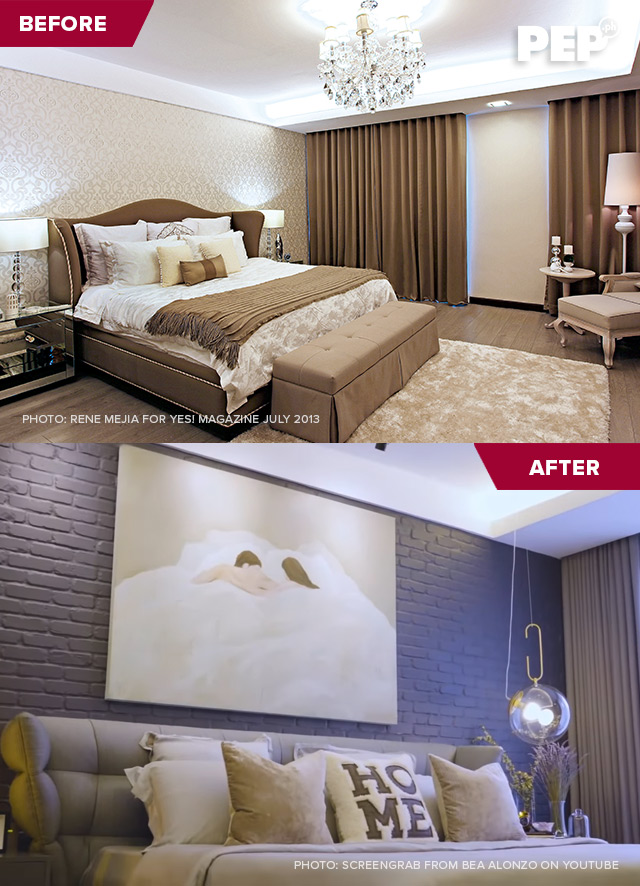 An impressive art piece by Chati Koronel, who's known for her multi-layered paintings, hangs above the headboard of Bea's bed.

Bea also replaced the side chair with a black couch that she bought from Philux and the gold-colored wooden TV cabinet with a structured metal one. 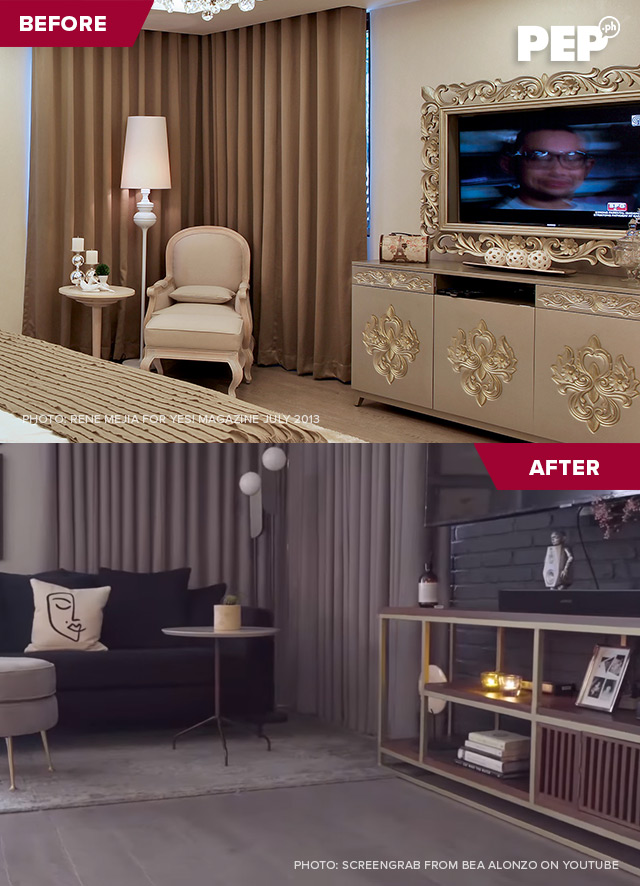 Bea did not touch her squeaky clean bathroom.

In her vlog, Bea described her bathroom as "nothing simple." But, of course, it is nothing but—with that chandelier and that swanky bathtub! 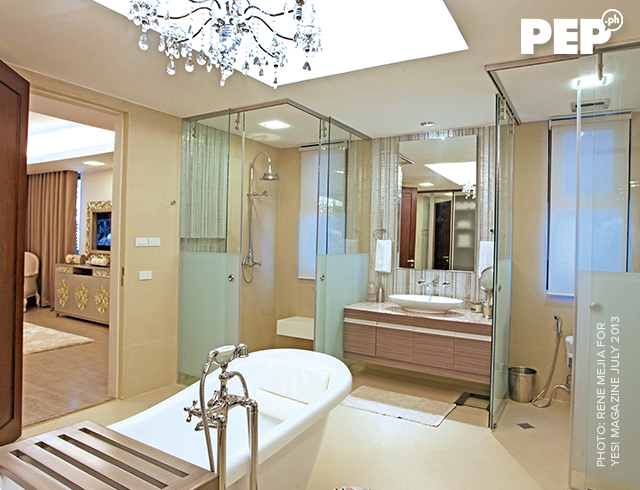 A tour of her walk-in closet showed little has been changed since it was last seen in a feature story in YES! magazine in July 2013.

Bea simply added more photos on the shelves of her walk-in closet, and replaced her window-type airconditioning unit with a wall-mounted one.

The center island cabinet is where she keeps her accessories, including her small purses, luxury shades, and face masks. 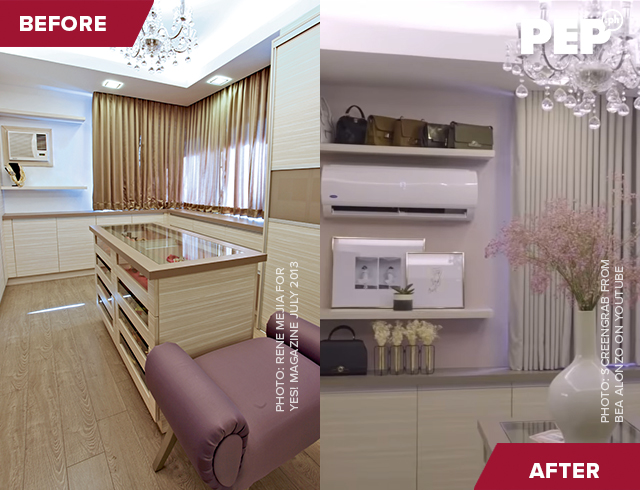 Bea said she had donated some of her designer pieces for charity, "Most of my collection, dinonate ko rin during ECQ.

"Actually, even before ECQ kasi nagkaroon ako ng Pre-loved by Bea na parang garage sale and it was very successful and I put all the money to Virlanie Foundation."

She also placed a couch in the middle of the room, which she uses every time she puts on her shoes. 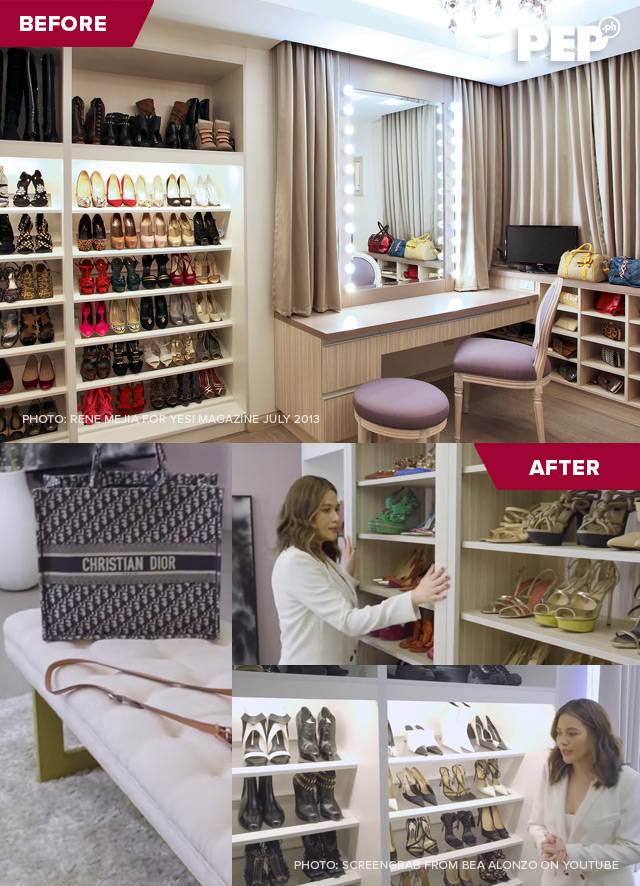 Bea excitedly talked about an exhibition poster by Yoko Ono titled A poem to be read with a magnifying glass, which she bought from Moderna Museet, an art museum in Stockholm, Sweden.

Bea actually bought a magnifying lens, but in the end, she couldn't read anything from it. 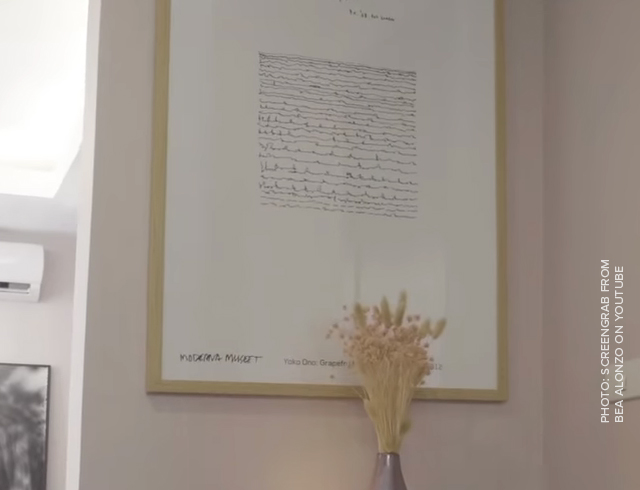 Bea also proudly showed her portrait by Butch Payawal, which was a gift from Aga Muhlach.

Bea said Aga, who was her leading man in the movie First Love, commissioned the artist for this art piece. 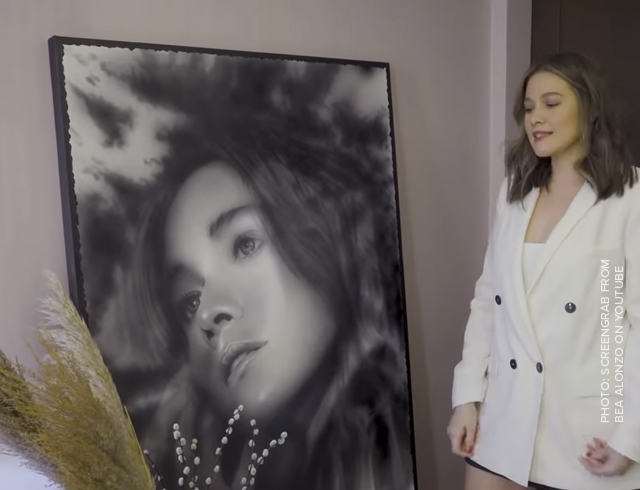 The Kapamilya star said she wanted to keep it minimal and comfortable.

"It's just neutral colors. I want it to be as basic as possible. Ayoko na hindi comfortable yung guests, so I have two beds here." 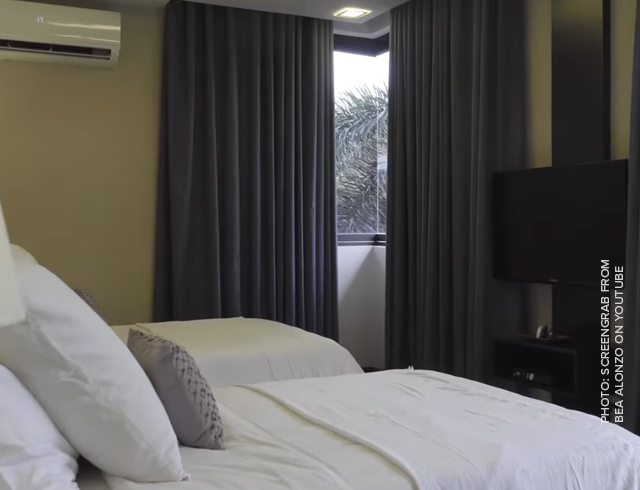 This room was once occupied by her brother James Carlos before he got married.

"When my brother used to live with me, naging room niya rin ito. I miss my brother kasi he’s now married. He has a child so focused siya doon.

The entertainment room or the family room is where Bea holds parties or get-together with her family and some of her closest friends.

She didn't make any changes in the room. 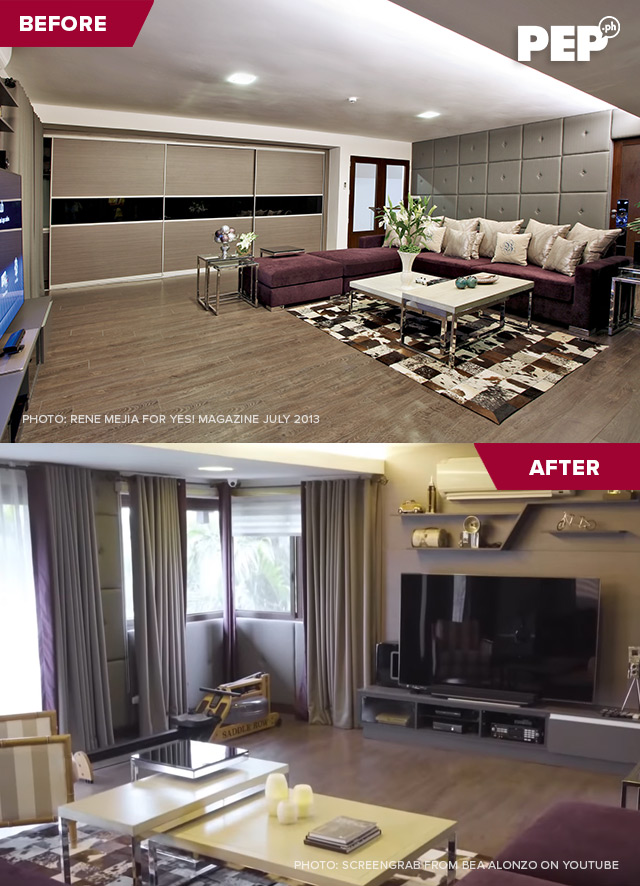 There's a small room inside the entertainment area that Bea turned into her mini gym. Bea said it used to be a yoga studio. 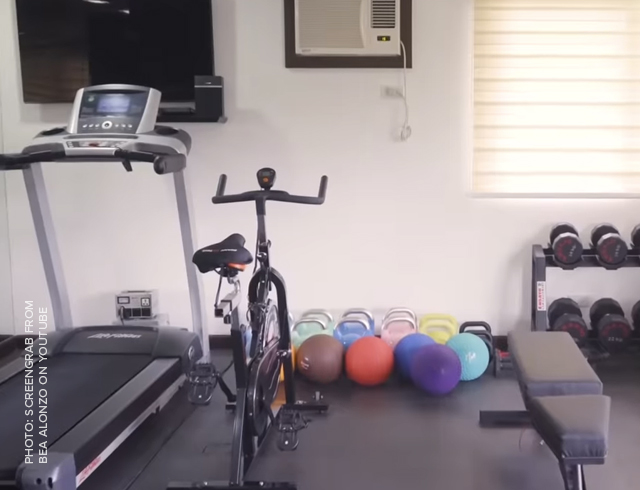 Her favorite part in this room: the sauna. 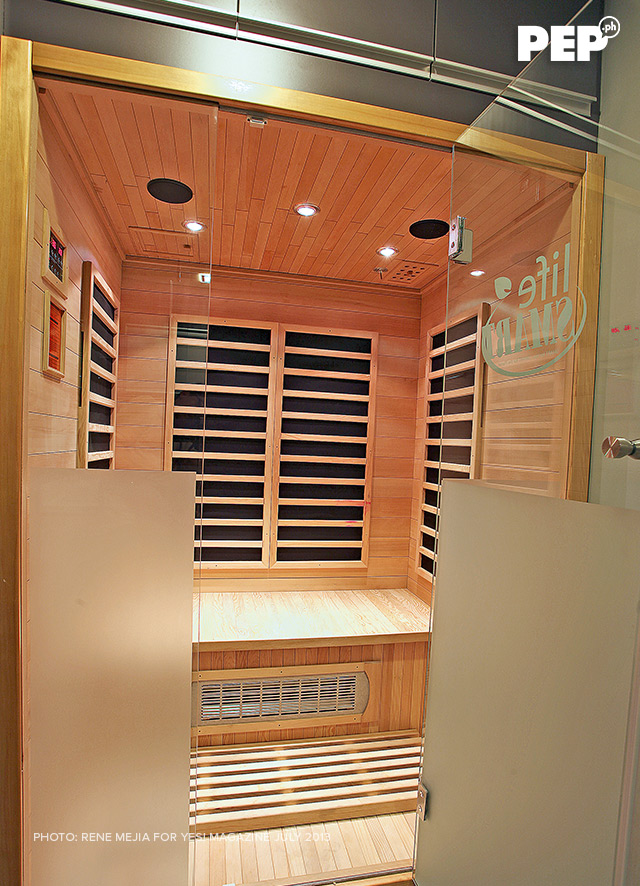