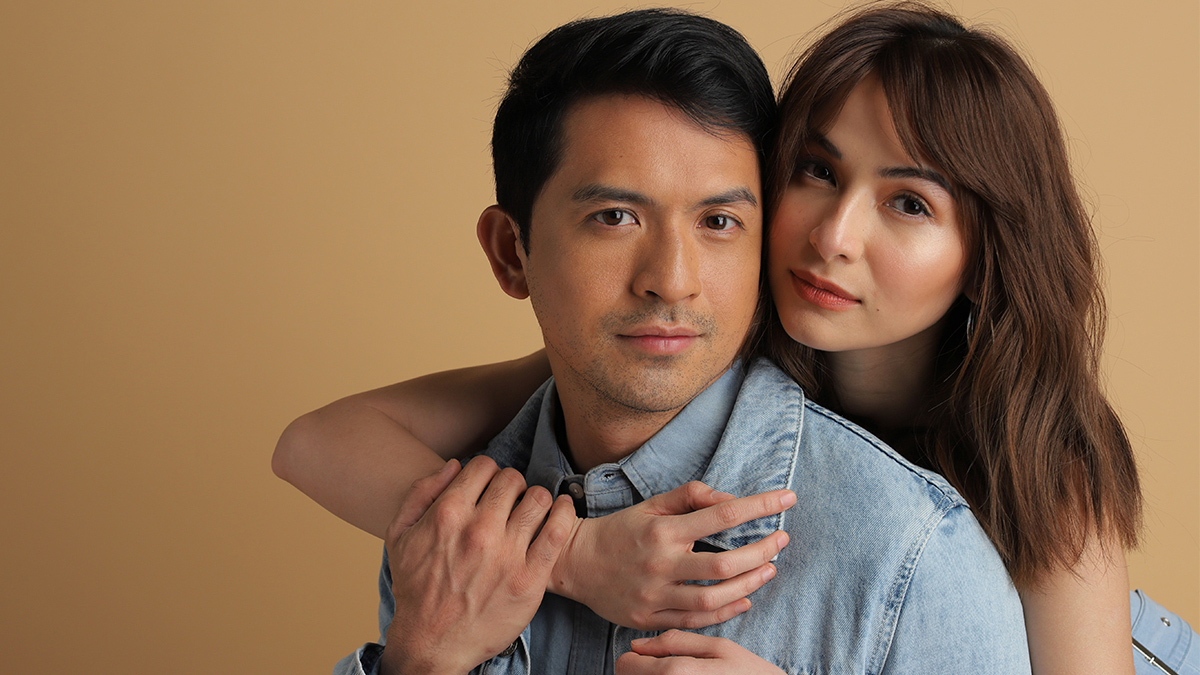 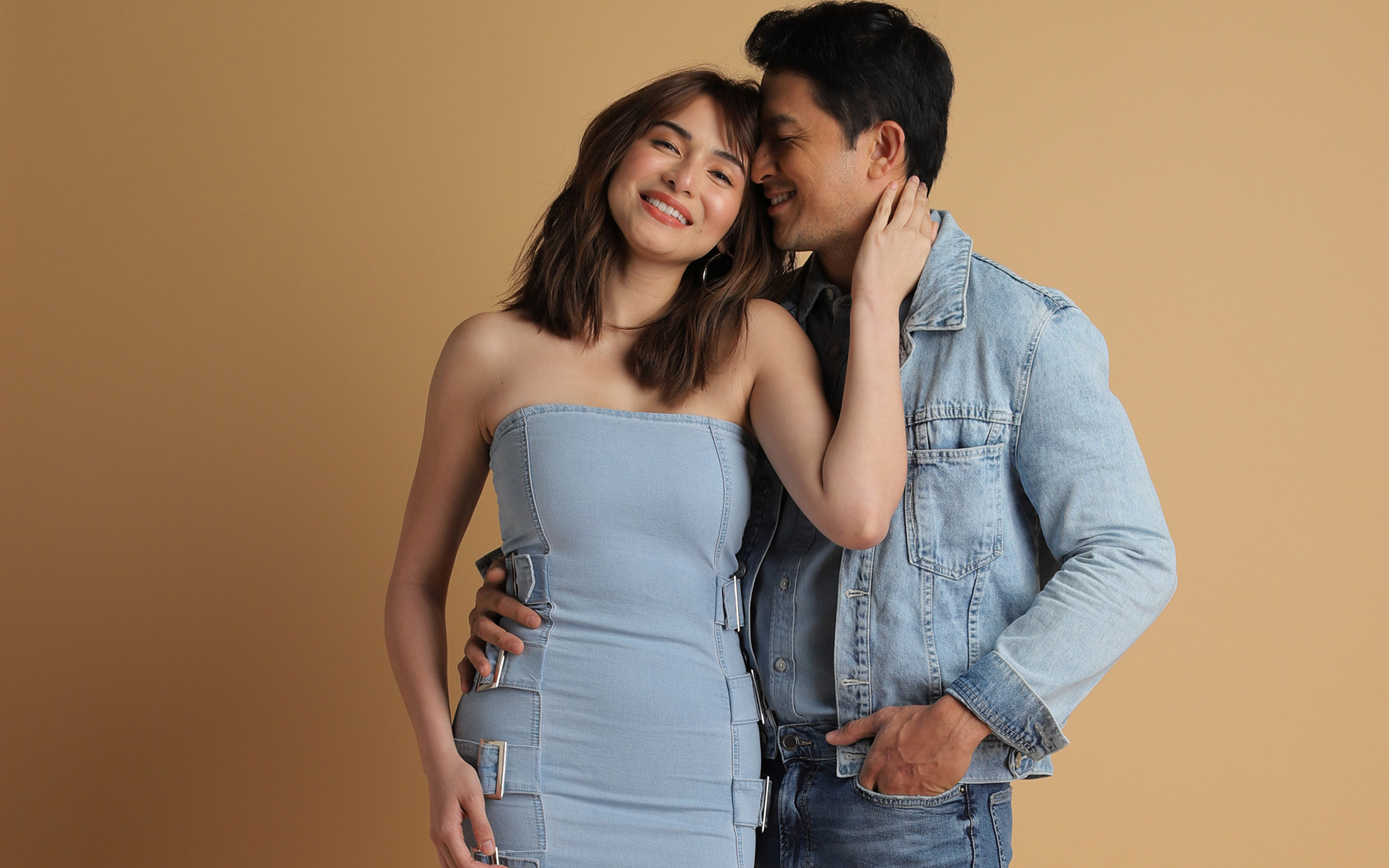 Dennis Trillo and Jennylyn Mercado are a fun couple to have around.

They are playful together, like when Dennis gives Jennylyn a piggyback ride as they work through a four-layout shoot with PEP.ph (Philippine Entertainment Portal) for their first Headliner interview together.

They are constanly holding hands, goo-eyeing each other, canoodling.

Ever bubbly and admittedly the mapang-asar one, Jennylyn also keeps heckling Dennis during their interview.

Ever the gentleman, Dennis just laughs off his girlfriend's impish ways; in fact, he finds them adorable. 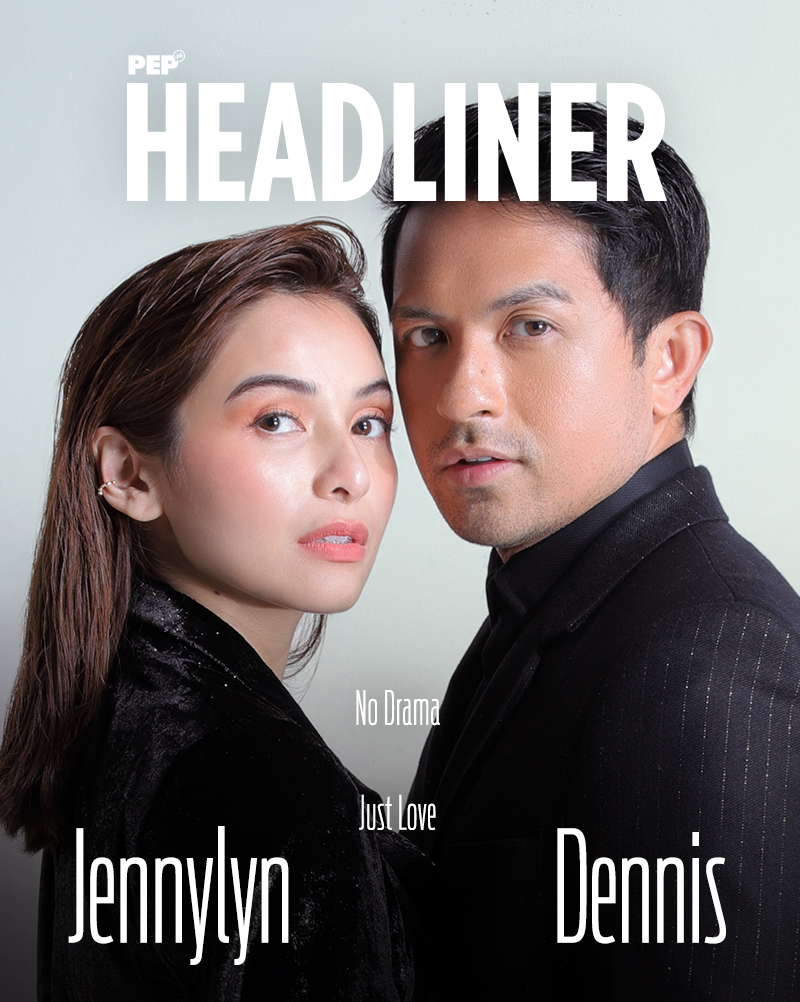 It seems Jennylyn has found an effective way to bring out the child in Dennis, who epitomizes the strong silent type of machismo.

She never seems to run out of ideas to keep the mood of a moment light.

Her high spirits know no bounds, and they've rubbed off on Dennis; he has learned to be spontaneous as well. 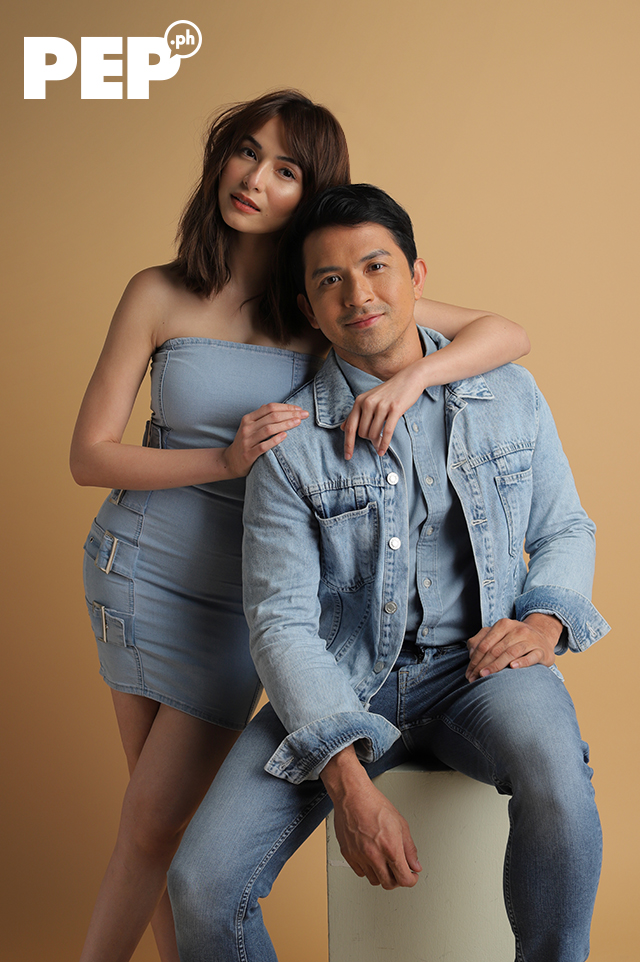 Dennis may not often show it, she says, but he can be very witty when throwing punchlines, “Eto si Dennis, minsan lang siya bumanat, pero nakakatawa!”

For Jennylyn and Dennis, both in their 30s, loving each other has gotten easier this time around, much more comfortable now that they're older than when they first became a pair in their 20s.

Their relationship in their younger years had been rocky. But they smoothed out the rough spots when they got back together five years ago.

And they are dead serious about their commitment to each other the second time around. 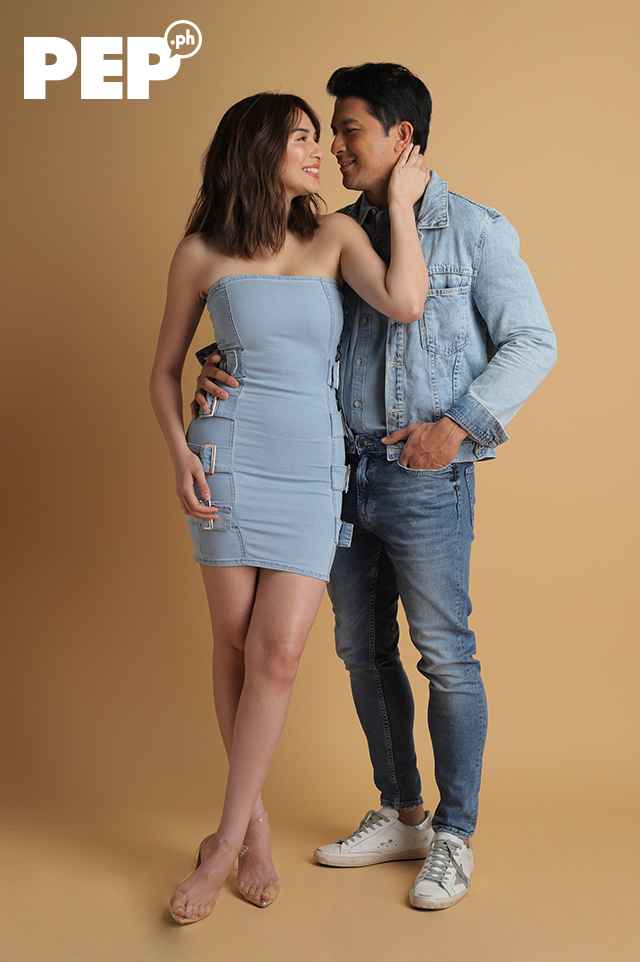 Jennylyn was only 19 and Dennis was 25 when they first worked together on the set of GMA-7's Now and Forever: Dangal, in 2006.

It was because each of them was in a relationship with someone else. 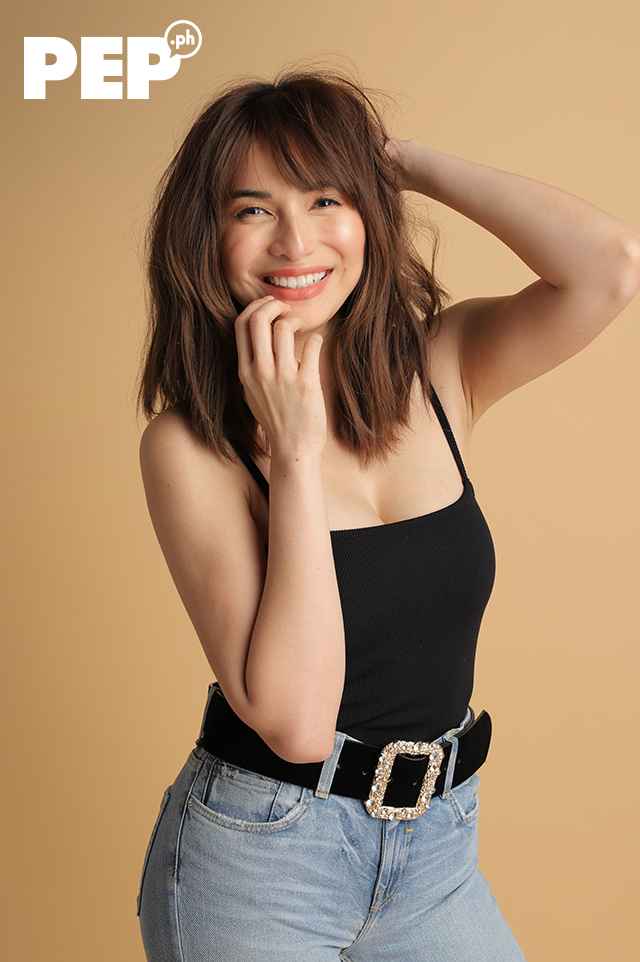 But by time they did the afternoon drama Gumapang Ka Sa Lusak, their third project together that aired from February 10 to June 18, 2010, Dennis and Jennylyn could no longer ignore the attraction between them.

Dennis, for his part, admits he found Jennylyn “intimidating” in the beginning. 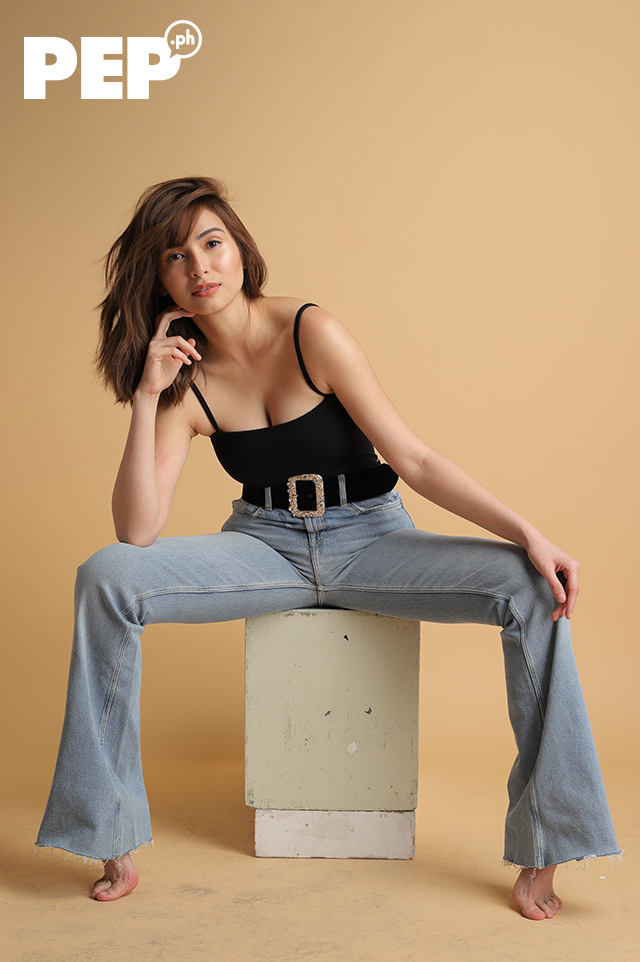 They became a couple sometime in April 2010, but 11 months later they broke up after one big fight.

They went their separate ways, got busy with their careers, had occasional romantic flings with fellow actors, but ended up in each other's arms again anyway.

It's different five years hence. Not only have they matured as artists, Dennis and Jennylyn have grown wiser in their outlook on life as well. 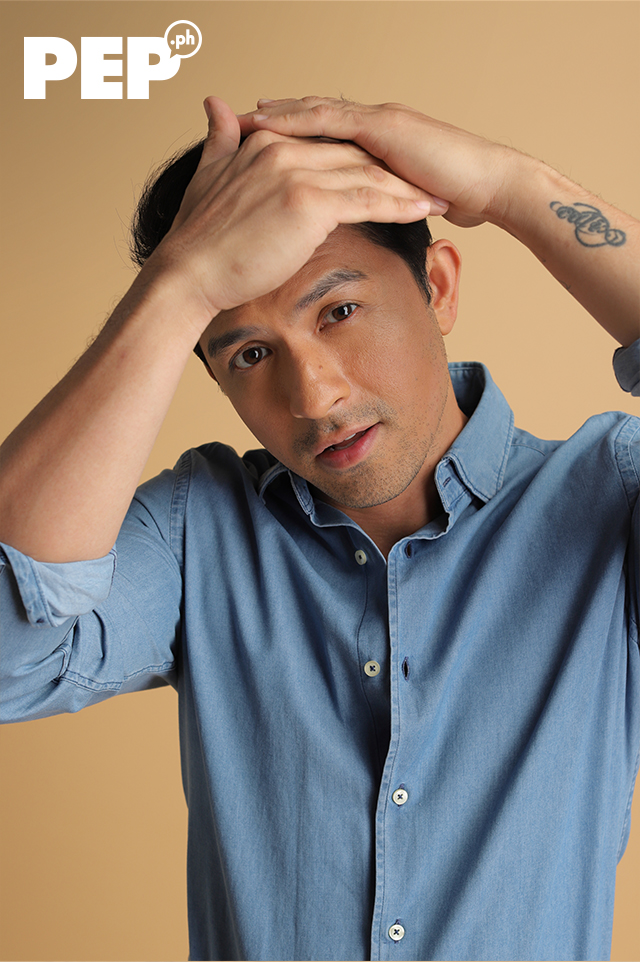 But beyond brushing aside the petty issues, Dennis says their relationship now is on stable ground because, well, love conquers all. 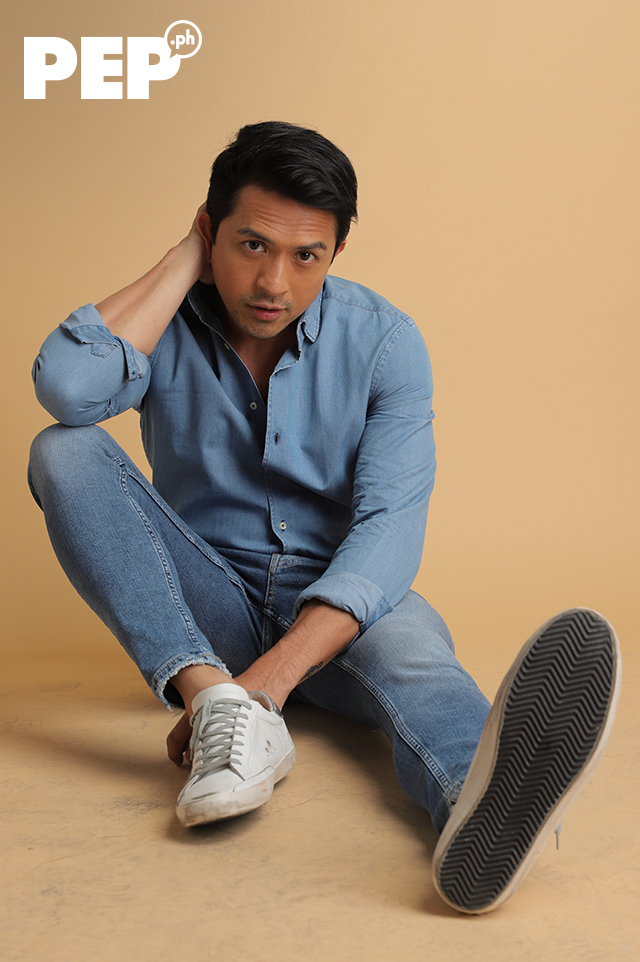 Dennis and Jennylyn got back together in a most quiet way.

The media only got a whiff of their rekindled romance when identical scenic photos of some beach resort simultaneously surfaced in separate posts of Dennis and Jennylyn on Instagram.

They did not post any pictures of them together, but their respective Instagram accounts showed identifiable spots in Balesin, an exclusive resort and popular celebrity getaway in Polilio, Quezon, accessible by chartered planes only,

It didn’t take long before netizens put two and two together, especially when Dennis showed a photo of a girl, with her back to the camera, standing in front of a floor-to-ceiling window of a dining area overlooking the beach. 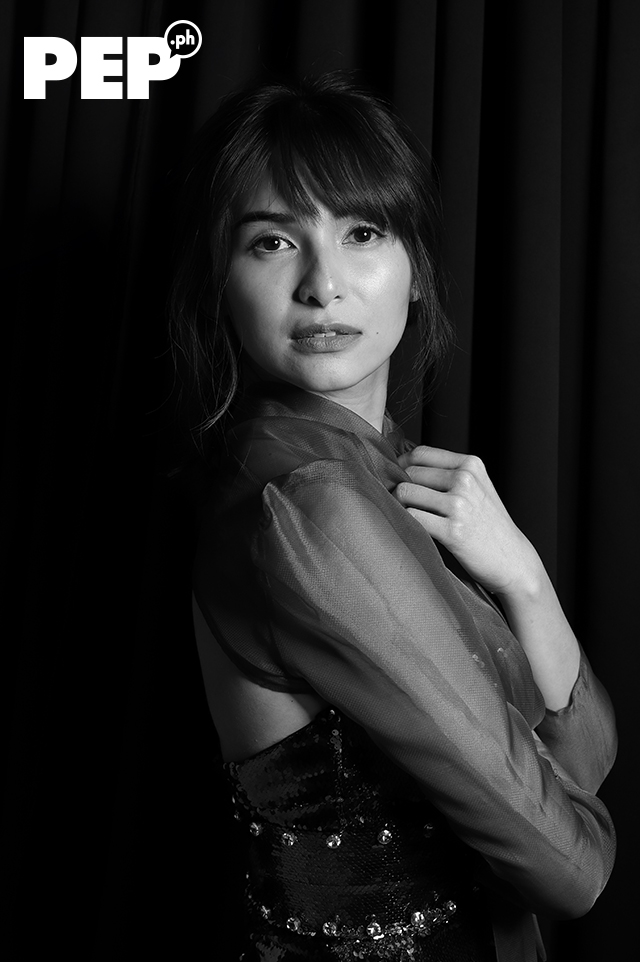 There was no caption, but astute celebrity snoops guessed it correctly. The mysterious lady in the photo was, indeed, Jennylyn.

Dennis only confirmed to the press on April 30, 2015—exactly 25 days after their Balesin trip—that, yes, he was with Jennylyn.

But even then, he remained guarded during the interview and described their adventure as just “friends” going out and taking things slow.

It took a year for both of them to go on record in 2016 that they've been “exclusively dating,” and another year would pass before they officially announced their relationship. 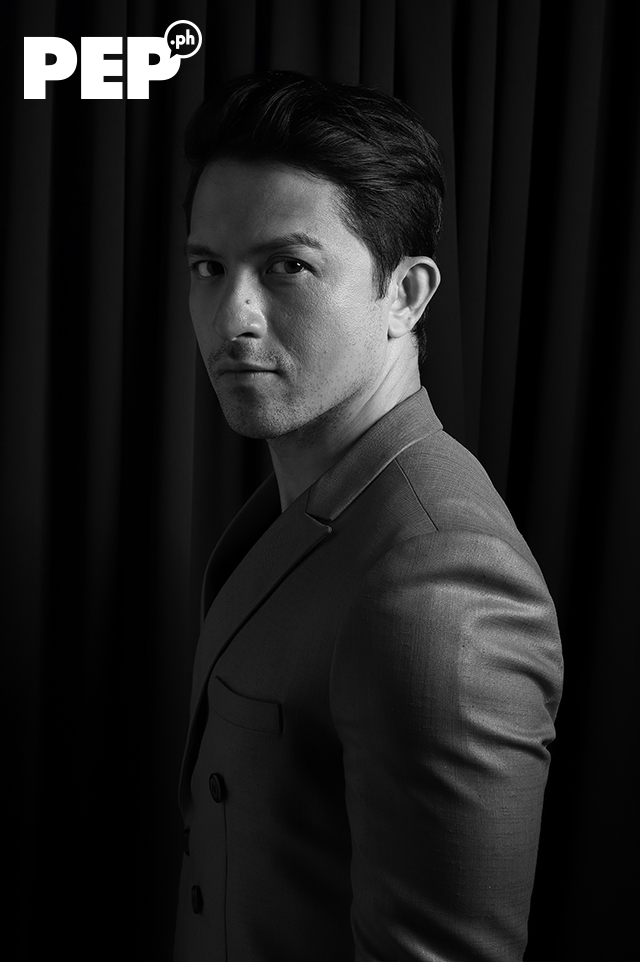 Jennylyn, one of the prettiest faces in showbiz, was named FHM’s Sexiest Woman during the year she and Dennis became a couple again.

But for Dennis, it wasn't the physical that sparked his feelings for her anew. 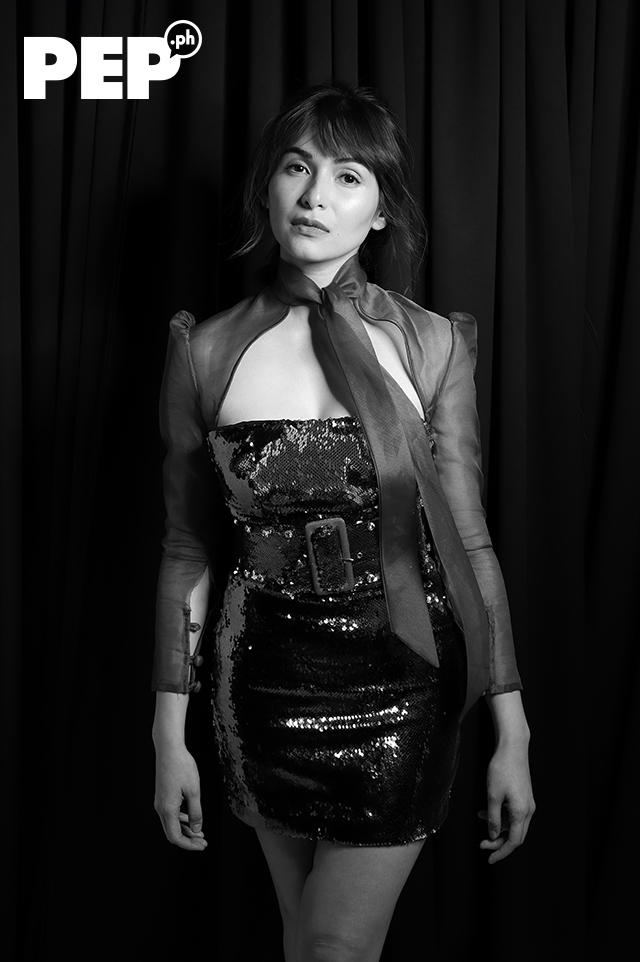 Their relationship is anything but dramatic. They are just a happy couple celebrating their togetherness, making each day a joyful one.

Now that they're into vlogging, they've given glimpses of how cute and makulit they are in real life.

Netizens particularly like it when they are singing together or when Dennis capitulates to Jennylyn's crazy antics.

Dennis also happens to be an effective and patient coach when it comes to teaching Jennylyn how to play drums.

This has to do with their collaborative videos on YouTube which they call "CoLove."

He makes sure that Jennylyn learns the basics and makes sure he doesn't get distracted by her cheesy antics.

When Jennylyn is getting a little overwhelmed by the lesson, he encourages her by complimenting her good hand-and-feet coordination, which is crucial when playing drums. 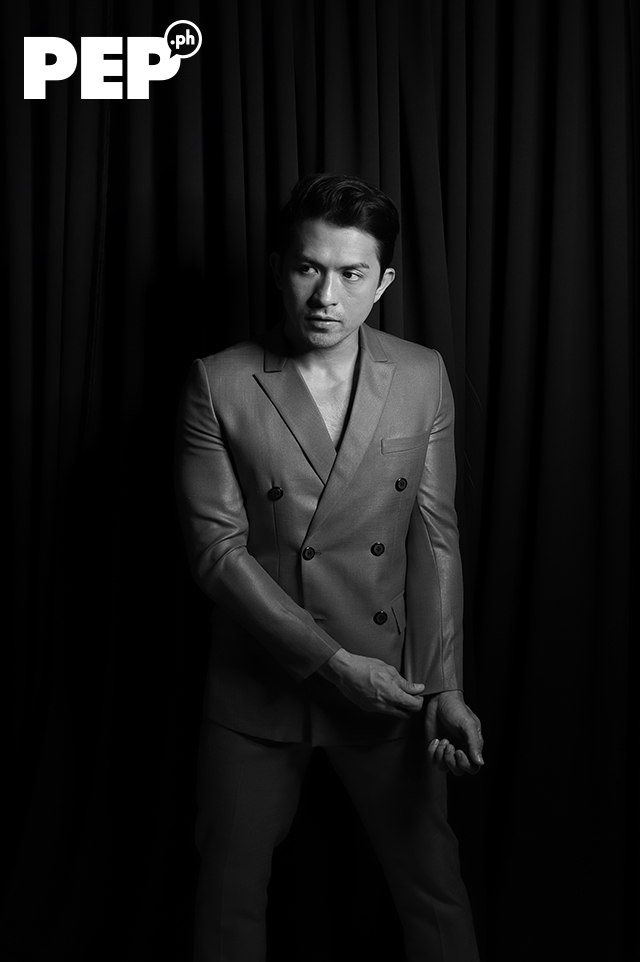 Thanks to Dennis, Jennylyn gets to play Hall and Oates' "Kiss On My List" on drums and sing along with him at the same time.

Jennylyn says Dennis's persistence for them to make music together led them to the concept of CoLove Live, their upcoming post-Valentine concert on February 15, at the New Frontier Theater.

The vlogs and social media posts of the Kapuso couple are also filled with snippets of their travels together that, in the words of Dennis, have helped them appreciate each other more.

He reasons that, outside of their comfort zone, they see each other in a truer, though sometimes harsher, light. And if they can accept that, then they're good.

She turns to Dennis for confirmation, "Tama?" 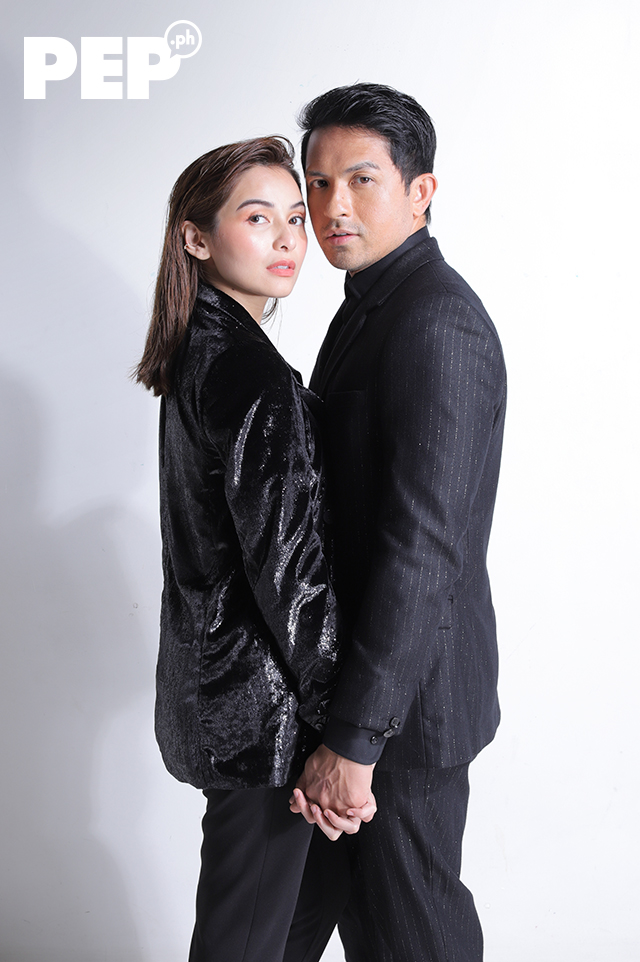 It's obvious that Dennis's awful sense of direction has become a running joke between them—further proof they've come to accept each other unconditionally, notwithstanding the flaws and shortcomings of the other. 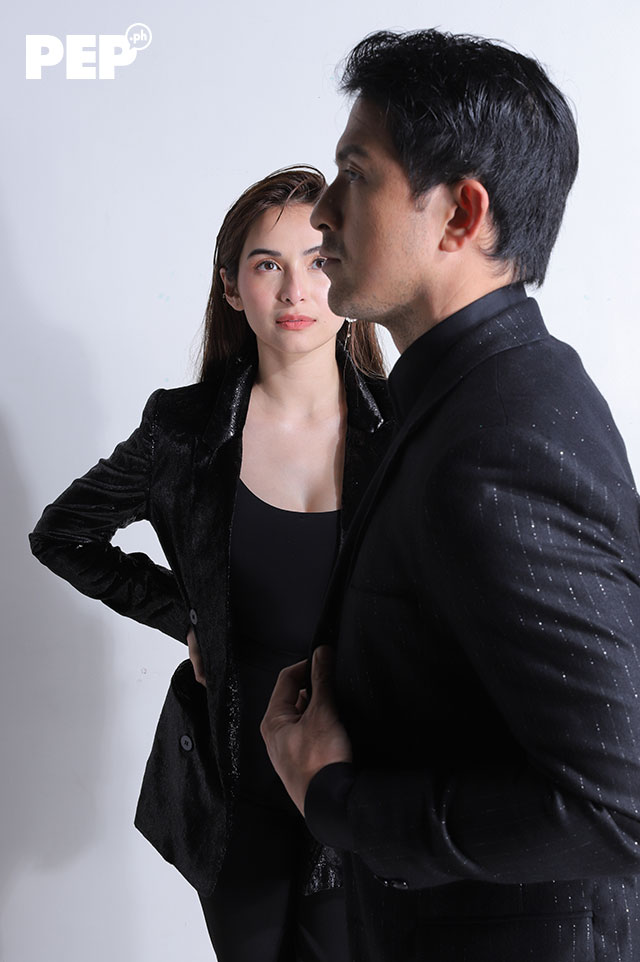 The couple had swam the waters of the Maldives, witnessed the Northern Lights in Finland, and basked in the romantic city of Paris, among many other places.

To be fair to Dennis, he's the one encouraging Jennylyn to be more adventurous in their travels, like when he dared her to eat exotic street food in Bangkok.

He documented her reaction to his challenge and showed it in his YouTube vlog dated October 2019.

In the vlog, Jennylyn is seen being squeamish about sampling the crispy insects that Dennis eggs her to try. She particularly doesn't like the one oozing with "juice," but Dennis keeps pushing her until she gives in.

Dennis, on the other hand, is grinning as he relates his version of the story, "Sinasabi ko naman sa kanya, 'O, eto isu-shoot natin, ha? Para sa YouTube.'

Jennylyn acquiesces, admitting he has a point, "Mahal daw. Sayang." 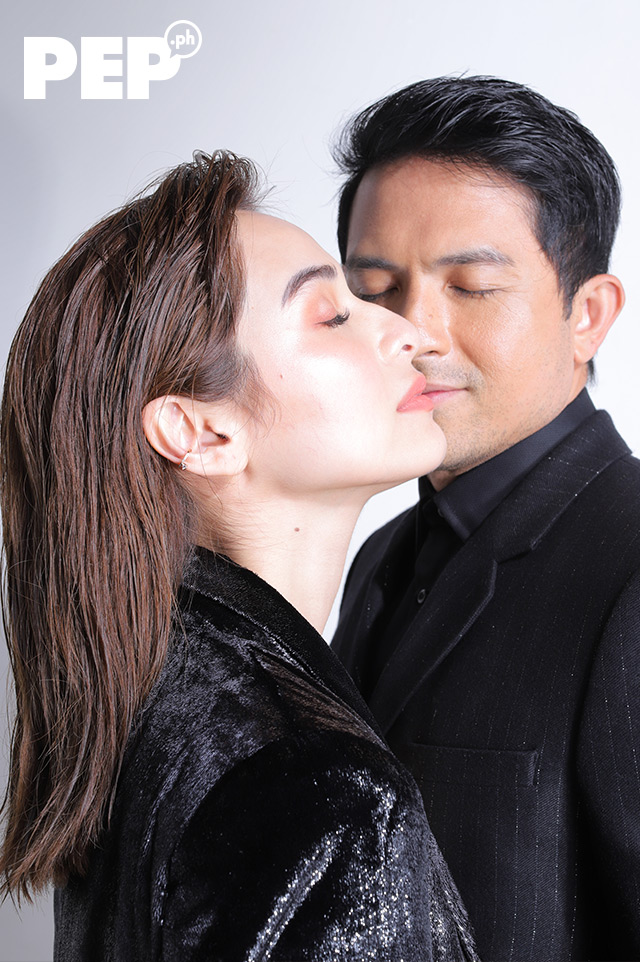 a mix of love and FAMILY

Another important factor in the growth of Dennis and Jennylyn's relationship is the support of their families.

On their Bangkok trip last year, they were accompanied by Dennis's mom Rita Trillo and Jennylyn's personal assistant Rosie Manansala.

In April 2017, Dennis accompanied Jennylyn when she went to South Korea to meet her biological dad Noli Pineda and bring him back to Manila for good.

Joining them on that trip was Jennylyn's son with Patrick Garcia, Alex Jazz.

Have their parents sent them feelers about wanting them to get married soon?

Her adoptive mom Lydia Mercado died in October 2016. But in January 2019, the Kapuso actress reconnected with her biological mom Jinkee Pineda, who is based in London. 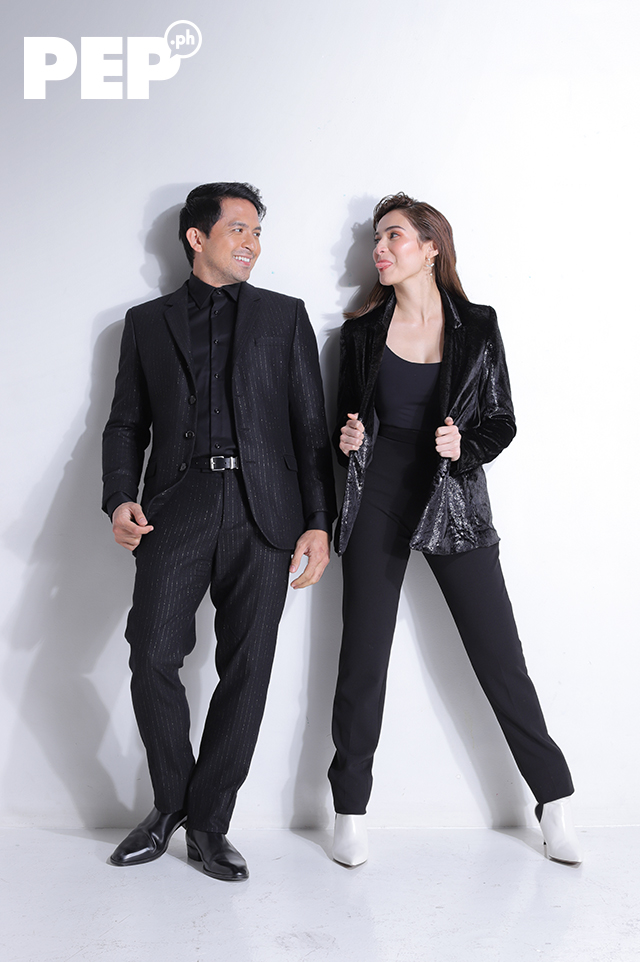 Dennis, for his part, admits that his dad Abelardo and mom Rita have asked him on the sly about getting married.

He then clarifies that his parents are merely fishing for details about any marriage plan, "Wala, parang pabiro lang naman, kasi medyo matagal na..."

The couple's exact anniversary is not known to the public. They probably can't pinpoint exactly when either, or they just couldn't care less.

Whatever for? As they say, time flies when you're having fun—for Dennis and Jennylyn most of all. 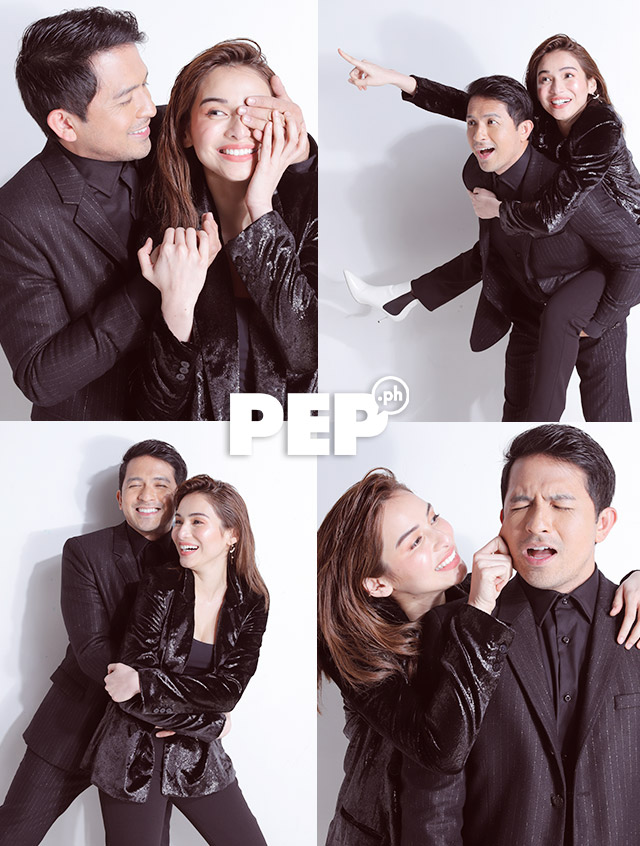 Special thanks to Katrina Aguila and Jan Enriquez