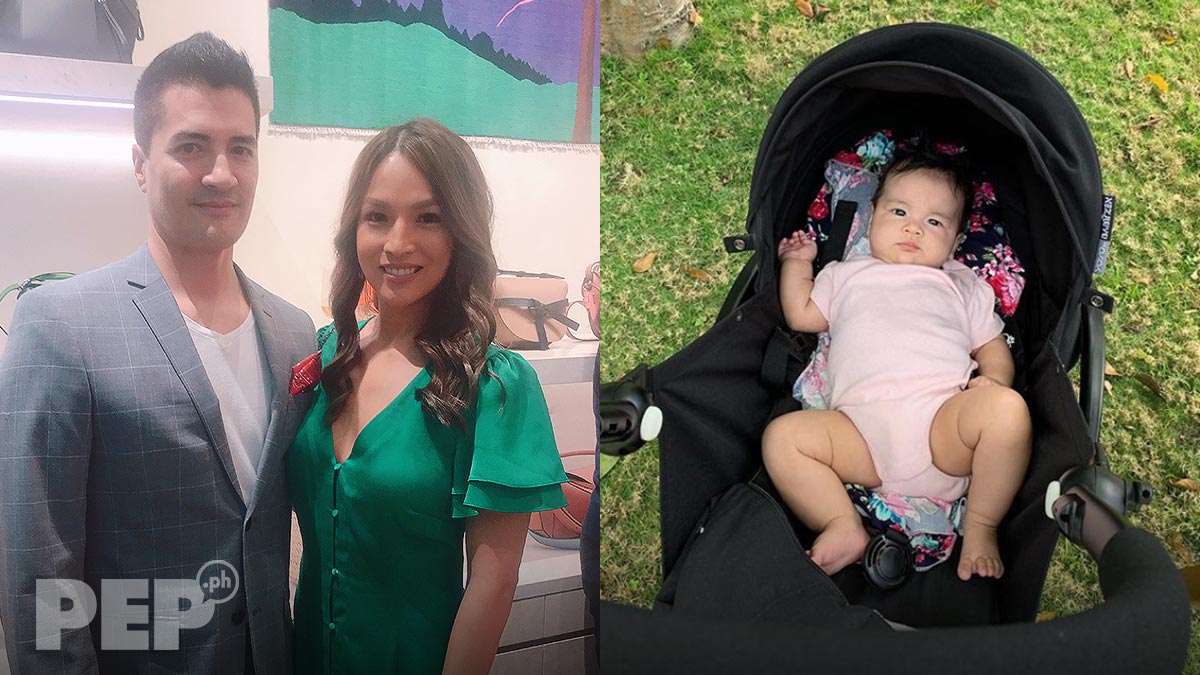 Troy Montero makes sure he does his part in taking care of Baby Rocket with wife Aubrey Miles: "I think we take turns but we want to make sure that we both share all the responsibilities. Just in case, one of us is gone, that way, if she's gone or I'm gone, it's not, like, 'Oh my gosh, why do I do?!' So we both take turns, we both do probably everything."
PHOTO/S: Nikko Tuazon / @milesaubrey on Instagram

It's been four months since Aubrey Miles and Troy Montero welcomed their third child, Rocket.

in an exclusive interview at the opening of Loewe's first store in Shangri-La Plaza, Mandaluyong City, PEP.ph (Philippine Entertainment Portal) talked to Aubrey and Troy about the experience of having a baby once again in their home.

Aubrey said, "This time around, after a decade, it's different, but it's better na every thing is new...All the baby stuff is so much easier now."

Troy agreed by saying, "I think we're... time has passed, and we're actually well-educated about having kids right now.

"There's a lot more, you know, even like the toys, the things out there, the strollers, the car seats...It's a step up compared to the past. So it's just things that help parents out, and makes things easier for us."

Why did they name their baby girl Rocket.

Aubrey said, "We just want something that's quite different. Just like Hunter is unique."

Hunter is the couple's nine-year-old son.

She said, "He likes giving her a bath. Ako naman, I like changing her, feeding her.

"And then, actually, minsan, automatic. Para kaming robot, whoever is closest, whoever has easier access, they you do it, gano'n."

Troy stressed that taking care of the baby should be equally shared between parents.

He explained, "I think we take turns, but we want to make sure that we both share all the responsibilities.

"So we both take turns, we both do probably everything. It just so happens that I end up giving her baths probably more because she kicks a lot, and you have to really be careful. It's almost like she's ready to jump out.

"I know Aubrey gets kinda like, 'Oh my gosh, she's moving so much now!' Cause she's strong.

"Of course, when you're feeding, it always a little bit more to the mom.

"Although I can bottle feed her."

Between the two of them, Aubrey said she is usually the stricter one.

"So yeah, the mom is more of the disciplinarian."

Both Aubrey and Troy are quite amused with their latest discoveries about Baby Rocket even if she's just four months old.

"She likes playing in the water, and when you take her out, she cries."

However, she does not like the feelng of wet diapers.

"Still, hindi naman ganun ka-big. We don't have a lot of friends and all our family is in the States.

The couple, however, is yet to pick a theme for their baby's birthday party.

The 41-year-old celebrity mom told PEP.ph, "Her name is Rocket so may be somewhere na space."