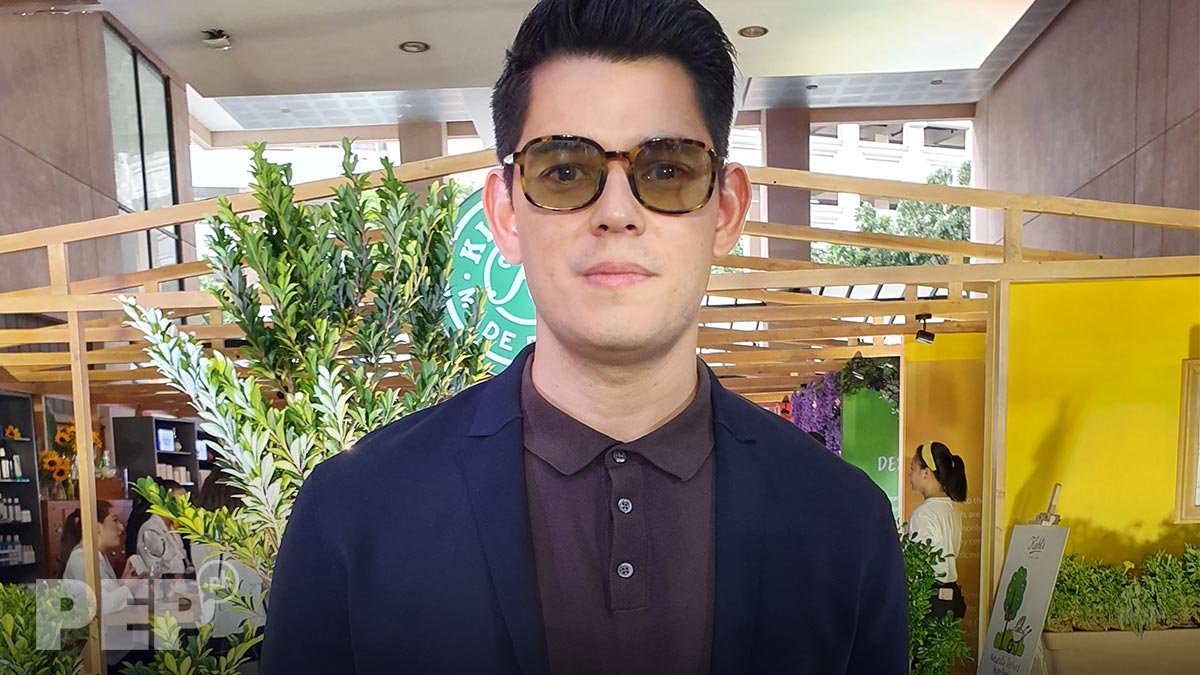 The little-known fact about Richard Gutierrez is he is an environmentalist and his six-year-old son has imbibed his advocacy. "Zion hates plastics also," says the actor.
PHOTO/S: Nikko Tuazon

All that Richard Gutierrez wants is to be a great dad.

Richard and Sarah Lahbati, his partner of seven years, have two sons, Zion, 6, and Kai, 1.

And he could not be more proud of his firstborn than seeing him become a loving brother to the baby of the family.

Talking about his children, the 35-year-old Kapamilya actor said that having them in his life have changed him.

"I think it's just a natural change... you hear it all the time na when you become a dad, 'You're gonna change,' and all that stuff. But [you'll never know] until you become a parent."

The son of Eddie Gutierrez and Annabelle Rama was interviewed by PEP.ph (Philippine Entertainment Portal) and other members of the press on July 18, Thursday, at the announcement of Kiehl’s Philippines' second year of their Made Better campaign.

Richard and his twin brother Raymond Gutierrez, who was also at the event, are both involved in the American brand's project for the environment.

Richard does not consider himself a strict dad; in fact, he is more lenient than Sarah.

But he sets boundaries.

He said, "I try not to be so strict. I try to let them be and let them decide and grow on their own.

"But, you know, we give them guidelines. I'm not super strict but there are boundaries."

Zion, of course, gets into mischief, and he is reprimanded each time, but does not get punished.

For the 35-year-old star, the most effective way of disciplining kids is to sit down and have a talk with them instead of giving them punishment immediately.

"Talking to them... making them understand is number one priority more than anything."

Just like most first-born kids, Zion also went through a period of adjustment when his baby brother was born.

Richard said he was initially jealous of Kai, and it took quite a while for him to get used to the new family setup.

He recounted, "In the beginning, siyempre biglang may bagong baby. That's normal.

"But as time passes by, you see that he cares more for his brother now."

When asked if he will allow Zion to join showbiz, the kapamilya actor said he would rather have him focus on his studies first.

He added, "He enjoys singing, you know, but we'll see. Everything is like playtime for him."

In a previous interview with PEP.ph (Philippine Entertainment Portal), the younger brother of Ruffa Gutierrez revealed how fatherhood "changed me completely not only in acting."

"It just changes your outlook in life, parang higher purpose in life."

RICHARD TEACHES ZION TO SAVE THE SEAS

One thing Richard instills in Zion is to care for the environment, especially the seas.

He said, "They know [about my advocacy]. Zion especially, Zion hates plastics also."

And whenever they can, he, Sarah, the toddler, and the baby travel.

Their most recent trip was in Anilao, Batangas, last month.

Richard and Raymond have been tapped by Kiehl’s Philippines to design limited-edition bottles for the brand's Calendula Toner and Ultra Facial Oil-Free Gel Cream.

A portion of the proceed from the sale of each bottle will go to Save Philippine Seas, a non-government organization that helps conserve and protect the country's marine life.

During the launch, Raymond said, "When they offered this project to us, I initially texted Chard and I said, 'This is something that you would be interested in.'

"He has actually been an environmentalist for a very long time now. He has worked with Green Peace, with different organizations.

"He's done documentaries for the environment, so I know that this is something that's very close to his heart."

Raymond added, "Ako naman, I enjoy the beach. If he is under the water, I'm above the water."

For this collaboration, Richard, who is into freedriving, picked a photo he took from one of his underwater explorations.

"I have a lot of photos I haven't really shared, so I had to go through them and think which one will be a standout.

"I chose the humpback whale tail because that was my greatest encounter in the ocean.

"And the whale's tail looked like an upside down heart. I don't know, I just liked it."

Richard took the photo of the sea animal in Vavau island, Tonga.

Meanwhile, Raymond advises those contemplating an advocacy to start small.

Raymond further explained, "I wanna suggest that it's never too late to start caring.

"Like what Chard said in the video, start small.

"It's the small decisions that you make on a daily basis that can lead to the biggest change."

Richard, on the other hand, said social media is most useful as a platform to raise more awareness about living a sustainable life.

He told the press, "Because of social media, the whole sustainability movement is like at the forefront right now.

"Fashion, retail, everyone is talking about sustainability.

"Right now, it's getting a lot of attention, which is good.

"So now is the right time for us to be aware and be conscious about our daily lives, our lifestyles."