Paolo Valenciano: Why two-hour playtime with daughter Leia means so much to him 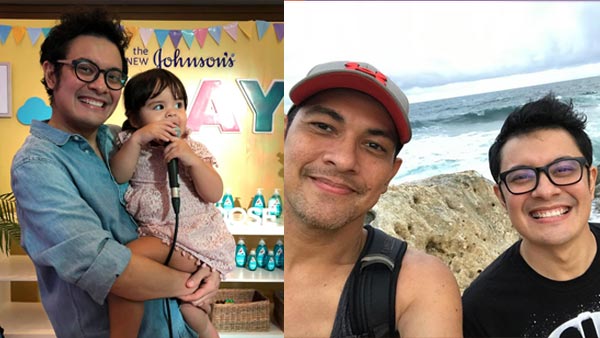 Like father, like son: Paolo Valenciano values every playtime moment with daughter Leia (left), just like how dad Gary V (right) became a playmate to him when he was still a child.
PHOTO/S: Justine Punzalan and @garyvalenciano on Instagram

He was a sought-after singer-performer and an in-demand leading man.

But to Paolo, his dad Gary was a playmate whose presence at home was the highlight of his day.

In an exclusive interview with PEP.ph (Philippine Entertainment Portal), the director-singer, who is also a dad to two-year-old Nataleia Martine, said, "With my dad, we also had the same situation as me right now with Leia [Nataleia's nickname].

"We were always spending time with our mom 'cause our dad was always busy with his tours, he's always doing concerts."

The eldest Valenciano son continued, "But the one activity that we always did together was, we used to collect G.I. Joe and Star Wars figures, and he would play with me.

"As early as my first memories growing up, when he would come home, he would open his box of G.I. Joe and Star Wars [toys], and we would just play the whole night in his room."

Now 34 years old, Paolo sstill cherishes those fond playtime memories, and, surprisingly, still keeps those very same toys that he and his dad used to play with.

"Some of those Star Wars toys and G.I. Joe, I still have them today," he said.

Paolo also grew up to be a big fan of Star Wars. In fact, he nicknamed his daughter after Princess Leia, and threw a Star Wars-themed party for her first birthday in November 2017.

Despite being fully booked with concerts and directorial stints, Paolo makes it a point to spend at least two hours a day playing with Leia.

His wife Samantha Godinez has more time for Leia.

"Obviously kapag naliligo siya, reading, studying, and all that, her mom has the time to do that with her.

"So I'm very conscious of the fact that I don't have the same time with her."

Just like his dad, Paolo hoped that these playtime moments would build a strong bond with Leia.

"I do notice that when it comes to playing, that's the only time that hinahanap niya talaga ako.

"And I wanna build that relationship with her, so I make it a point na when she wakes up in the morning, kahit na may trabaho ako, na may e-mails akong kailangang i-send, that's all secondary to me.

"What's important to me is to be able to play with her so that we develop the trust, the relationship, where she knows na I'm not just her dad, I'm also her friend."

Being the creative and liberal dad that he is, Paolo gives Leia enough freedom to choose her toys and the games that she wants to play.

He doesn't find it necessary to confine her daughter to just girly toys.

For him, what matters is that she grows up in a home where she is free to be herself.

He explained "We also don't limit her to toys that are stereotypically for girls or for boys.

"She loves playing with cars, she loves Spider Man, but she loves Barbie, she loves cooking.

"We just wanted her to not be boxed in by 'pink is for girls, blue is for boys.'

"She loves blue, she loves green.

"That's the environment that we want her to grow up in. It's sort of like very free for her to play."

And part of Leia's "freedom" is rolling on the floor

Grocery shopping with her goggles and sans her shoes

Paolo does not seem to have any restriction for his little girl so long as she is having fun and safe.

Sam's Father's Day greeting showed that her husband's "let her be" parenting method totally has her nod of approval.

She wrote, "Happy fathers day to my first born, @paolovalenciano. Leia will probably become a director or an actor or even a singer because of all the make believe we do because of u... maybe not a dancer jk! we love u so much, more - sam leia trooper"

Meanwhile, Paolo's first Instagram message for his daughter already gave away the kind of dad he would be.

It was posted on November 9, 2016, a week after his daughter was born.

It read, "My darling Leia , how I wish we made this earth a better place for you to live in. But you know what? It's easy to look at all the dirt and let it distract me from the more important things in life. Life... We are alive. You are alive. And your life gives mine new meaning. It may sound selfish , but I needed you even before you were born. Ive failed at many things but now I feel like I've done pretty damn alright. First, it was falling in love with your mom, then our loyal wolf TrooperVee, and now you're here to take your rightful spot as princess of House Vee. Life is actually pretty sweet. Happy 1st week , my love ! Now, let Mama and papa sleep pllllllllllllssssssssss."

Aside from building a home where Leia is free to be herself, Paolo also made sure that their house is going to be a also a safe playground for her.

"Our whole house except for my den is Leia-proof.

"We just make sure that everything is safe, all our outlets are covered, all our extension cords, when they're not being used are unplugged, everything's turned off.

"We just make sure that she can go anywhere in the house."

Although turning their house into a kid-free zone entailed so much work, Paolo said the whole family's safety was his priority.

"There are still times that she finds something.

"But for our peace of mind, if we just adjusted everything, it would just let us sleep better at home."

This interview took place at the Johnson's Choose Gentle event held on August 13, 2019, at the Blue Leaf Events Pavilion in Taguig City.