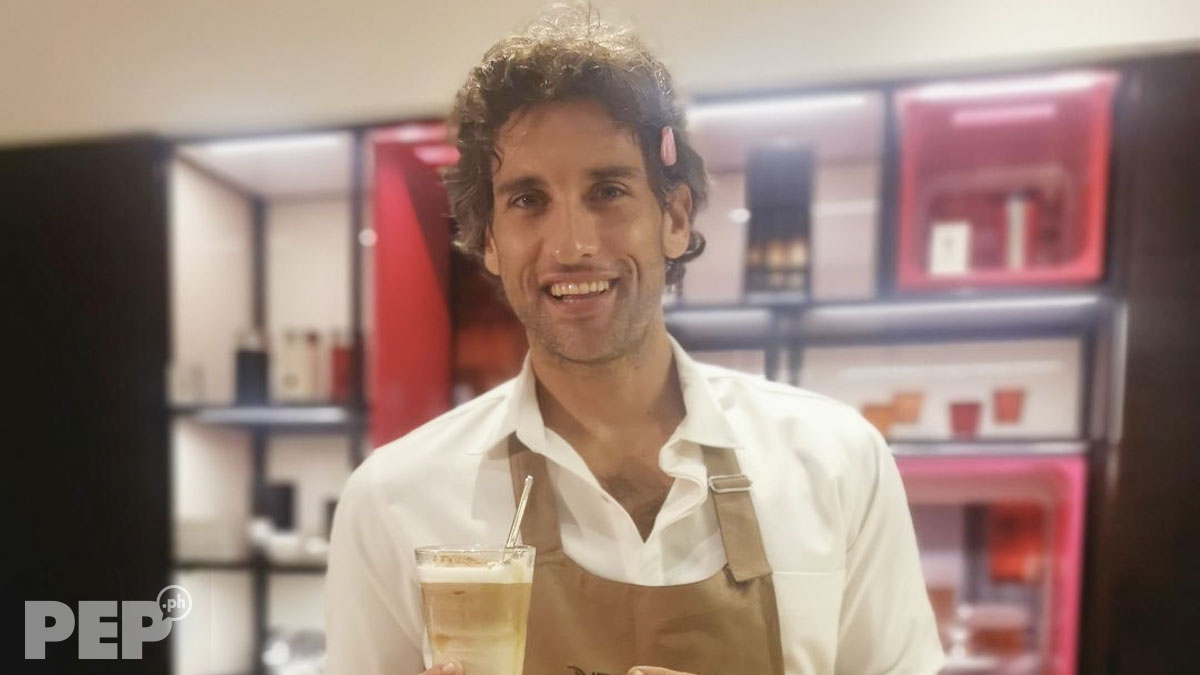 Nico Bolzico was in Japan when he learned about wife Solenn Heussaff's pregnancy. His reaction? "I was extremely happy inside, but chill on the outside."
PHOTO/S: Kaye Koo

With parenthood coming up, Nico Bolzico needs all the energizing pick-me-ups he can get.

His family life is about to get a whole lot more interesting, now that he and wife Solenn Heussaff are expecting a baby girl in January 2020.

Nico tells PEP.ph (Philippine Entertainment Portal) that he is learning that being prepared and being in the journey itself are two different things.

"Whatever they say about getting pregnant, before I wanted either, but now, as long as she is healthy, I also see myself protecting my girl."

In his usual manner of funny-serious, bullied-husband-club mode, he explains, "Everyone says when she is born, she is gonna completely dominate me, I will have no power, no control."

HOW NICO LEARNED ABOUT SOLENN'S PREGNANCY

Nico recalls that while he was away on a trip to Osaka, Japan, he was aware that Solenn's period would be arriving soon.

As he kept asking her if her period had arrived, Solenn kept putting off answering him. It turns out that she had wanted to tell him in person, but because he kept bugging her, she finally sent him an image of the pregnancy test showing two lines.

Nico says, "I didn't know what those two lines meant, but when she sends me an emoji with a pregnant woman, I got it then."

His first reaction was extreme happiness.

"But she told me not to say anything because I was around many people, so inside me there was an explosion, I was extremely happy inside, but chill on the outside."

As they prepare for the rollercoaster journey ahead, Nico is happy he is doing it with the woman who owns his heart completely.

"I have the best mother for her I can ask for, so I know that everything will be fine because Solenn will be there.

"And I will be there, the random one making mistakes, so Solenn will be the one telling me that's wrong, that's right!"

Nico is taking it all in stride, as caring for their one-year-old dog Pochola has prepared him.

"I have a lot of practice with Pochola, she is good training, I love her like a daughter, I take care of her. I put a lot of time in taking care of her, so it's like kinda getting ready for someone else. I am very protective with her, so imagine me with my daughter!"

WHAT KIND OF DAD WILL NICO BOLZICO BE?

Nico and Solenn have non-negotiables—as he likes to post in his Bullied Husband Club captions—that they will not compromise on matters about their daughter.

He says, "I have two answers to that... one, when she is not yet aware of the world, she will have full protection and a lot of love. And two, when she is more aware, when she can make her own choices, for me it is complete freedom for her to choose what she wants and what makes her happy."

In a more serious tone, he stresses that he won't be the type to spoil his daughter.

"And as long as she is a good person, the rest is secondary and we want to inculcate good values, we don't want... I will not allow, we will not allow to have a spoiled kid, so we will make sure.

"Spoiling is something we don't want, you know spoiled kids. She will not be like that, she will be a sweet girl because she has a sweet mom!"

Nico is firm in his commitment, "We will try to be the best parents."

NICO AND SOLENN'S DAUGHTER WILL BE "FULL PINOY"

Because they are having a baby girl, Nico reveals that Solenn will get to choose the name. If it were a boy, he would have been the one to choose. For now, mum's the word.

He also admits that even if their daughter is ethnically Pinoy-French-Argentinian, culturally and in all things that matter, she will be Pinoy.

He is adamant in saying, "She is Filipina. We want her to have the full-on Filipino culture... and I want her to speak Tagalog properly, very well, so that will be a priority. But I also want her to be able to speak Spanish because my parents don't speak English, so Spanish will be a need so she can communicate with her grandparents in Argentina."

"We can leave the French behind, we don't need it, so as long as she learns Filipino and Argentinian, I am okay, more Latin..."

While they're waiting for their baby girl, Nico continues to learn new things. At the event of Nespresso held last September 8, at Powerplant Mall in Makati City, he was asked to work on a Barista Creations drink.

All the coffees in the Barista Creations line—Chiaro (sweet biscuit), Scuro (roasted), and Corto (intensely roasted)—differ in roastedness and were created with various levels of milk.

For Nico, the challenge called for the birth of a Bolziccino, his Barista Creations recipe which uses Corto coffee, milk, and maple syrup finished with cinnamon, chocolate or caramel syrup.

He describes his drink, saying, "It's something fresher because of the weather, very hot, so this is very refreshing. I love coffee and milk, so combined, this is almost dessert for me."

"If an Italian hears me, 'you should take this for dessert,' they would kill me because after 12 noon you cannot take any coffee with milk. Cappuccino is only until 12 noon in Italy so they won't serve you if you ask for it and they will look at you, it's like asking for pineapple on a pizza."

But since he is not Italian, it doesn't matter when and how he drinks his coffee.

"Because I am not Italian, I love to drink it after eating, it's my dessert, so any time of the day, not just breakfast. And it has proteins from the milk, sugar from the syrup, it's the bomb!"

On regular mornings though, he likes his coffee black, favoring the Nicaragua, Indonesia, and Colombia variants from the Master Origin line of Nespresso.