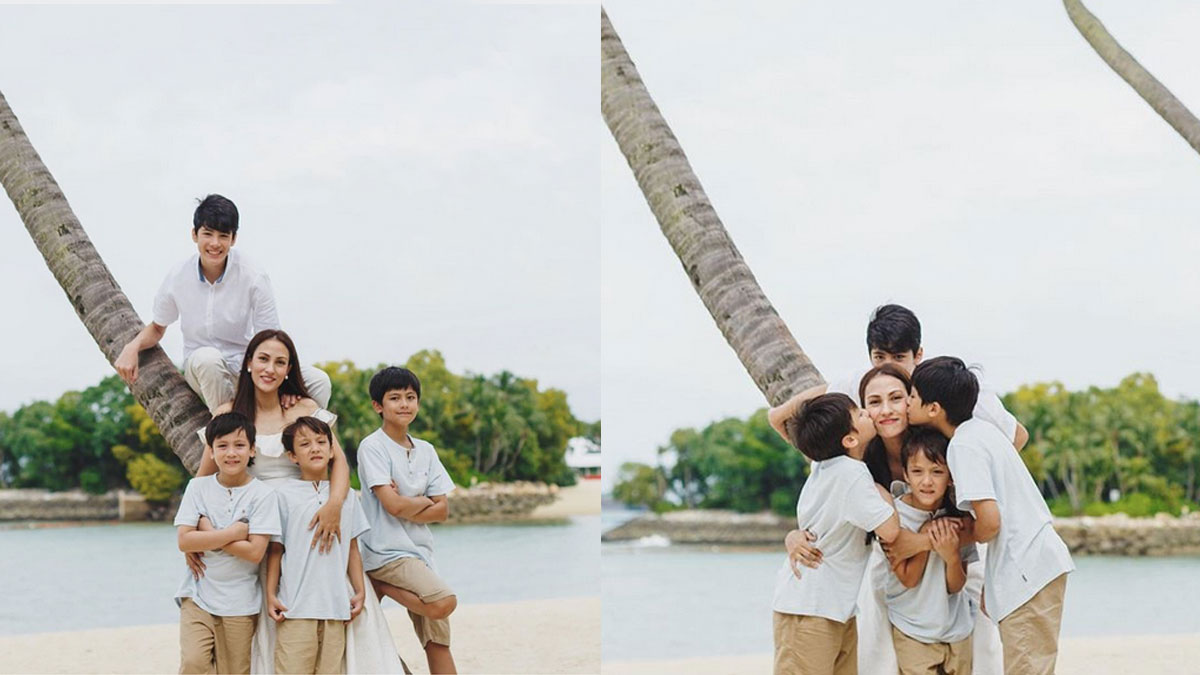 Joy Sotto with sons: (topmost) Hugo, (left-right) Sandro, Rosanno, and Edrigu. Not in photo is Amari, Joy's only daughter in her brood of five.
PHOTO/S: @joywsotto on Instagram

They say raising sons is quite challenging, but Joy Sotto has learned to take things in stride.

“I guess, you just get used to it. In my case, I had four sons before my daughter came, so I can’t really compare.

“But so far, there’s nothing yet that can make me say being a mom of boys is difficult,” she told PEP.ph (Philippine Entertainment Portal) at an event of SM Kids.

Her constant prayer is to be able to do a good job as a mother.

“It will be an achievement for every mom to have God-fearing kids.

“Praying not, praying they won’t grow up being mga pasaway. I’m praying that they grow up to be gentlemen and may respect, may love so yun.”

Her eldest Hugo is now 14. Edrigu and Sandro are 11 and 7, respectively. The youngest son Rosanno is six years old.

Has she started talking to them about girls?

The wife of Gian Sotto nodded.

“So I told them, ‘You pray that your future wife will know God as early as now para when you meet then it’s gonna be the perfect timing.

“So I always tell them that as early as now, ‘You pray for your future wife.’ So yun.”

WILL IT BE SHOWBIZ OR POLITICS FOR GIAN AND JOY SOTTO’S SONS?

All her sons, including her unica hija Amari, are good-looking. Will she and Gian let them join showbiz?

“Are we going to let them join it? You know what, maybe not now, but whatever God’s plan for them is we’ll support them, so who knows? Maybe one of them, I don’t know.”

“I don’t know also. They’re too young. Whatever God has planned for them, we’ll support.

“But as early as now, studies is the main priority.”

HOW DOES SHE MANAGE THE BOYS’ FIGHTS?

Smiling, she replied, “Before the event, they actually fought, but I think the key there is to patch it up right away—like right away.

“Like what I did, I pulled them aside the two of them, it was Sandro and Rosanno.

“What I did was I pulled them aside, and I had to ask them, ‘Okay, what happened?’

“I had to be the referee and then I had to ask them to apologize to each other and to forgive.”

Doe they listen if her voice would sound more strict?

“I always try to be malumanay. But I’m not a perfect mom. Sometimes, I really lose my patience.

“But as much as possible, I really try to, when I talk to them, I try to be as calm as possible. But there are times when I do lose my patience, it’s normal naman, e.”