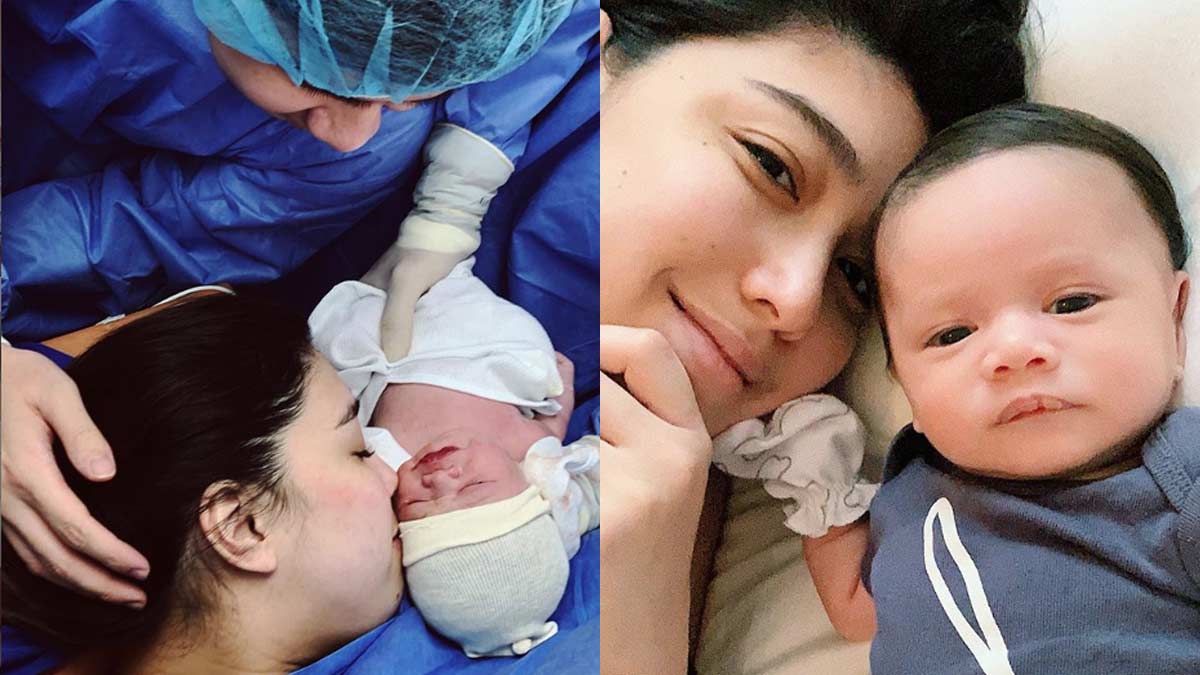 Dani Barretto says she will make it up to her daughter Millie for the ordeal she went through during her birth: "She was the strong one for the both of us. I will tell her that when she's bigger."
PHOTO/S: @danibarretto on Instagram

Dani Barretto narrates the ordeal she and husband Xavi Panlilio faced when their daughter Millie was born on September 13, 2019.

The whole birthing situation caught Dani, Xavi, and their team of doctors and nurses off guard.

She was set to have a normal birth delivery until the young mom reached her 39th week of pregnancy.

"All throughout my pregnancy, perfect yung position niya for normal birth. But last minute, they needed to do an emergency C-section," the daughter of Marjorie Barretto begins.

At the time, there were no signs that Dani was about to give birth.

"As in wala, anything. No contractions, nothing...

Dani was then given the option to do labor induction.

Labor induction, as MayoClinic.org explains, is "the stimulation of uterine contractions during pregnancy before labor begins on its own to achieve a vaginal birth."

Dani continues on her vlog, "Yung time na iyon, medyo ready na talaga ako manganak, to be honest. Ready na kami. Everything was ready. We were just waiting for the day that she'll come out, but wala talaga. No signs."

The first-time mom was then cleared to undergo the procedure.

"Nung last check-up ko with the doctor, schinedulan na ako magpa-induce labor. That was September 10. I was scheduled to go to the hospital mga September 12."

"We got to the OB complex around 10 a.m. They started the induce labor process at around 11.

"When they checked me, I was 1-cm lang. 1-cm dilated, so technically wala lang iyon. So antay kami, antay-antay."

Her contractions began at 9 p.m. She kept herself updated with the status through the monitor, which was being used to follow the progress of Dani's contractions and Millie's heartbeat.

Then around 12 midnight, Dani sensed a change of pace in the room.

The sequence of events began to escalate from there.

At 12:30 a.m., Millie's heartbeat declined to a dangerous 80 and then for a brief moment, she flatlined.

Immediately, Dani shouted to the nurses, "Get her out!"

Dani was immediately wheeled out of her room and into the operating room, leaving Xavi behind at the lobby area.

The celebrity mom continues, "Makikita mo talaga ang bilis ng mga nurse. Ang bilis everyone. As in everybody stormed in..."

Her anesthesiologist talked her through the process, but Dani was in too much shock to fully process what was happening around her.

"As in nung time na iyon, iniisip ko lang... I literally was just praying to God and I was talking to Him and she was fighting.

"It's really not good, but they keep telling [me na] lumalaban siya.

"But then nakikita mo talaga on the side, iyong mga nurse, 'Critical, critical.'

When Millie was born, Xavi was already in the operating room beside Dani, who was still in the state of shock.

The new mom continues, "You are literally anticipating if your child is alive or not...

"To calm me down, the nurse got a doppler machine and [placed it] right beside my ear, it was there just to let me hear [na] may heartbeat yung baby.

"There was silence for what felt like 10 to 15 seconds. It felt so long. As in yung sinabi nila, 'Baby out,' Kaming dalawa as in... after the 15 seconds when we heard her cry, oh my god."

Dani says she was in tears for most of that time.

"Wala nag-expect na mangyari iyon... Nagulat kaming lahat. Even the doctors expected that I was going to give birth the next day."

Dani then reveals that Millie was taken to the Neonatal Intensive Care Unit (NICU) right after she was taken out.

Apparently, due to the circumstances, Millie got stressed and babies tend to poop whenever they feel stress.

Xavi explains that since Dani wasn't dilating yet, Millie was stuck inside with her poop for a long time.

He says, "Parang siyang gate na nakasara. Since she was contracting, the space inside her womb was getting small that Millie was getting really stressed... it just so happened na hindi siya makalabas and she pooped inside.

"She was swimming in it and she actually injested some fecal matter."

Thankfully, Dani and Xavi's pediatrician was there to suction out the poop upon birth.

Still, Millie had to be monitored at the NICU for the first few days, especially since there was a risk of getting an infection.

Dani says, "They needed to check her breathing to see if she could breathe on her own. Kaya medyo naka-oxygen siya for a while."

Then during Millie's first blood test, Dani says the results were "all clear."

"Walang infection, but our pedia decided to run another test after two days to check if everything is really clear kasi medyo daw too good to be true yung test results given she ingested a lot of poop," she continues.

"That's why we stayed in the hospital for a longer period of time. Our pedia made sure that Millie was okay and that hindi kami puwede umuwi until clear siya."

Dani's recovery was pretty fast considering she didn't do anything out of the ordinary.

She says, "Walang anything. Walang procedure to make things easier for you to recover. Walang sinaksak sa akin for the recovery to be faster or makatayo agad, makagalaw ako agad.

"I think it was adrenaline and mother’s instinct that got me to recover really fast."

The fashion blogger explains, "I gave birth ng 1:30 to 2:00 a.m., so I was basically still numb. You can't move your legs kapag you're under morphine and epidural.

"The minute I got to my room, I kept telling them I want to see my baby kasi sandali ko lang siya nahawakan. Dinala na siya sa NICU right away."

Dani's need to see her daughter motivated her to get well ASAP.

"I wanted to see her so bad. And then they said, 'You can go down to her kapag na-feel mo na iyong legs mo ulit.' Mga 6 a.m. tumatayo na ako. As in ginising ko na siya, 'Bumaba na tayo kay Millie.'

"The whole concept is I want to see my daughter, who is in the NICU, who almost died, so medyo… Imagine if iyon yung thinking mo, hihilata ka ba sa kama mo? To be honest, hindi.

"Kung nanay ka at muntik nawala anak mo sa iyo, tingin mo ba may oras ka pa matulog? To be honest, wala. Everyone kept telling me to sleep and I was like, ‘No, I need to see her.'"

By 7 a.m., Dani and Millie finally met. That was the first time she held her daughter close.

Dani and Xavi visited her every day. Dani wanted to attend to her daughter as much as she could, but this intention did come with its set of frustrations.

Dani's frustration affected her appetite, but she motivated herself to eat more and increase her milk supply.

She also motivated herself to move and walk around.

But Dani admits that it isn't ideal to push for recovery that fast and not have sufficient rest.

"But my priority wasn't really me, which is not really a good thing. Most especially if CS ka. Kasi CS ka, mas kailangan ng recovery.

At the end of the vlog, Dani promises to "make it up" to Millie.

The young mom reveals that for the first few weeks, she dealt with postpartum blues. "Sinisisi ko iyong sarili ko sa nangyari sa kanya. I felt like it was my fault why she had to go through that and why she almost died and why she was so stressed in my stomach...

"She was the strong one for the both of us. I will tell her that when she's bigger."