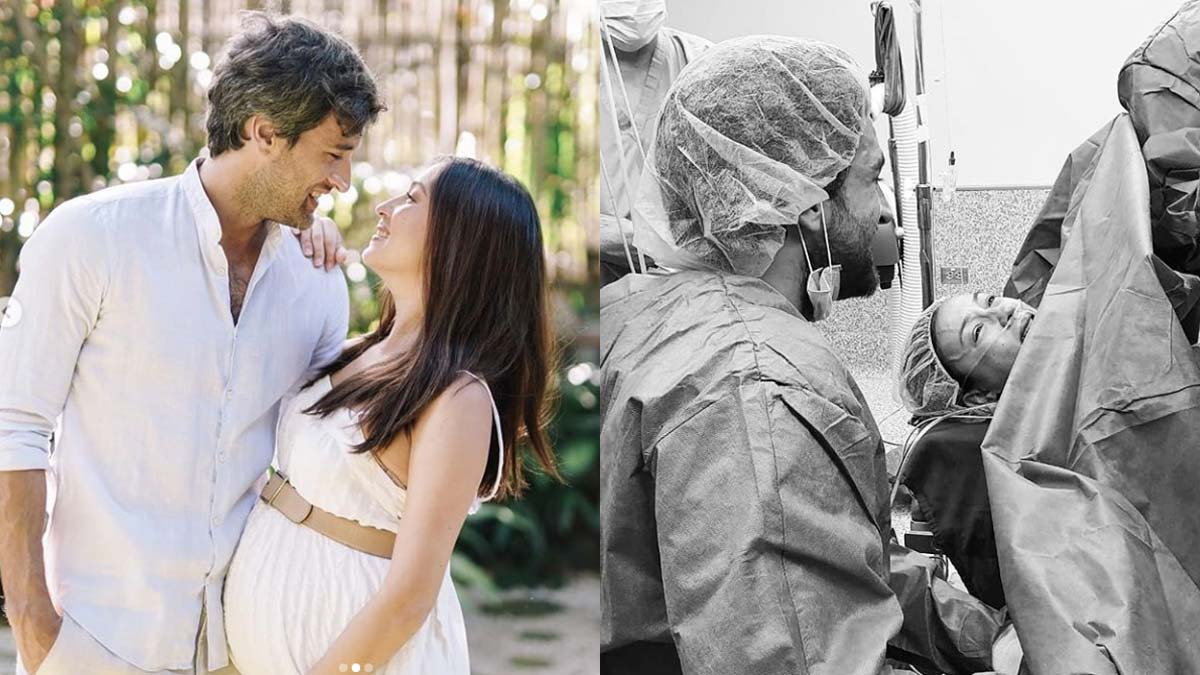 Solenn Heussaff (in photo with husband Nico Bolzico) gets emotional as she shares her pregnancy journey on her YouTube channel. The new celebrity mom gave birth to her daughter Thylane Katana on New Year's Day.
PHOTO/S: @solenn on Instagram

After giving birth to her daughter Thylane Katana, new mom Solenn Heussaff has released a vlog recounting her pregnancy journey.

Published on her YouTube channel on December 31, 2019, the video marks the first time Solenn has opened up about her experience on social media.

The GMA-7 actress was 34 weeks pregnant when she recorded the video and she was three to four weeks away from her due date.

The celebrity mom got emotional as she realized how much she and husband Nico Bolzico had been through.

"It's been such a roller coaster. Everything was fine in the beginning," Solenn begins in the video.

"Basically, what you go through, you don't learn in school. It just kinda happens and you just learn as you go.

During the first half of her pregnancy, Solenn was busy with work.

She continues, "I was pregnant in April. I was working the first almost five months of my pregnancy shooting a TV series called Love You Two, which was a lot of fun to shoot.

"We were shooting in a hotel most of the time, so it was very safe for the baby and I."

The Kapuso talent also worked on the directorial debut film of Filipino-American actor Dante Basco, who is best known for his role in the 1991 Steven Spielberg film Hook.

Around this time, Solenn also flew to Canada for the premiere of Mistero de la Noche, a film she did with director Adolf Alix, Jr.

Solenn continues on her vlog, "Throughout my whole pregnancy, if it wasn't for anything internal, I would say I've had the easiest pregnancy ever.

"No morning sickness, no cravings, no mood swings..."

Things changed when the actress entered her fifth month.

"So, I would have to say that the worst week and a half, two weeks of my life. It went by so slow. I couldn't do anything.

On top of that, Solenn learned she was prone to APAS or Antiphospholipid Antibody Syndrome, an autoimmune disorder commonly experienced during pregnancy.

She remarks in the video, "I didn't know there would be so many complications and I feel so good, so I didn't get it. I couldn't understand why this was happening to me."

But the Kapuso celebrity mom was able to push through it, thanks to the help of her husband Nico.

Solenn continues, "My husband was so good at being my nurse. As in, making sure he would go to the office later every day just to inject me, which is also why I took a leave from work because I just had to chill.

The video then shows Solenn giving herself an injection as Nico applauds her strength and independence.

"With the injections, things really worked well. The baby went to 30 percentile, and I was able to maintain a good weight for her with healthy meals."

Solenn's doctor recommended a diet that had Solenn consuming 3000 calories a day to help the baby grow.

"I'd send a photo to my gynie and he would say, 'You need to eat more.' I already was eating four times the amount I usually eat, so who would have thought that eating would be so hard?"

Then, when Solenn was at the home stretch of her pregnancy, she learned that she had placenta calcification, which she described as "when your placenta matures as you grow to your 40th week."

With everything she had to do for the safety of her baby, Solenn was thankful she had nine pregnant friends to share the experience with.

"So, if you’re going through the same thing guys, kaya niyo iyan. You can do it."

Looking back at her journey from that point, Solenn got emotional.

Tearing up, she says in the video, "It's been such a long journey. It’s been a long, long journey. So happy I'm finally at the end."

Solenn then gave birth to her daughter Thylane Katana on January 1, 2020.