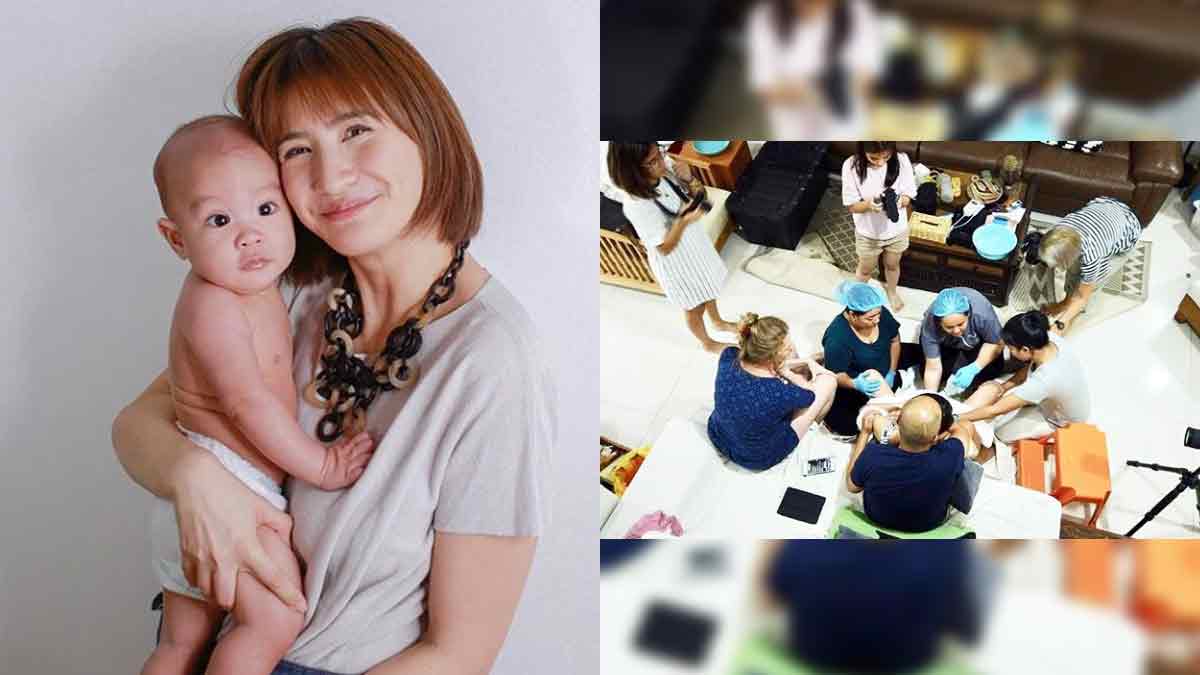 Rica Peralejo's second Manu turns one year old this June 9. The celebrity mom recalls that special day when she gave birth to him at home.
PHOTO/S: @ricaperalejo on Instagram

A year ago, on June 9, Rica gave birth to her second son Manu after 25 hours of labor.

The celebrity mom had a team of birthing experts around her, giving support and assistance as she delivered her baby in the comforts of her home.

She writes in her latest Instagram post: "I can never remember Manu's birthday without remembering each and every one of the many people who helped usher him into this world.

"It was such a memorable birth not only because of the kind of labor I went through, and where I actually gave birth, but also because he was born in the midst of people who were of tremendous skill and love.

"Can you imagine being born in the middle of all these exemplary women? Who were of strength and tenderness!"

Looking back at the experience, Rica sees Manu's birth as a "coming together" of "seemingly opposed things."

For her, home birth is "according to God's wonderful design for the woman's body and the baby's agency," and it happens "in the presence of all your loved ones and a birthing team who are willing to do everything possible to make it their first choice to trust God's intelligent design for our bodies."

At the time, people questioned if it was safe for her to deliver a baby without the assistance a hospital could provide.

Still, Rica was determined to give birth "the most natural way." It was what she considered as the "best possible birth."

The actual event was everything the mother of two could have hoped for and more.

She concludes in her recent Instagram post: "To be born at home, but also to be safe.

"To be born after many many hours, but also to never be in danger.

"To be respected, while also being assisted."

Those who have followed Rica's story know how special the birth of Manu is to her and her family.

For five years since the birth of her first son Philip, Rica and husband Joseph Bonifacio had been praying for another child.

And in those five years of waiting, Rica went through two miscarriages.

So, when Manu finally came into the picture, the former actress was ecstatic.

Published as is, the message reads: "This time last year the sun was about to rise and you just came out of my womb.

"Your way of coming was divine and it challenged so many people.

"But what they did not know is that even your conception and the whole nine months, were altogether a challenge to your mama who was wrestling to believe and to have the faith for your life.

"Oh yes, you were that child God had to use so I can learn to fight when He says so.

"That was tough for a woman who is more used to letting go, you know.

"But God does not want to let go of you, Sweet Darling.

"He wants to keep you.

"So in the end, please know that God loves you and He wants you here.

"He authored and sustains your life and if I am right, He will use it to continue to challenge norms and many.

"For your life is a reminder that God is a waymaker — in rivers and deserts. That spaces and circumstances are not enough to say when it's enough.

"You are that unlikely hope in a long and arduous journey, that fresh and new thing that springs forth in the midst of your mother's brokenness and sorrow.

"Life is tragic and beautiful as @katecbowler would say.

"It is both and not one takes away from the other. Both are inevitably experienced by mortals.

"And you — you are tough and tender, strong and sweet.

"You are where false dichotomies collapse, and we can begin to say why do we have to choose when we can and should have both?

"Thank you for being so little and yet so given to live a life for others.

"You are only one but so many things and minds have been changed so far. Whatever this gift is, use it for the glory of God always, will you?"