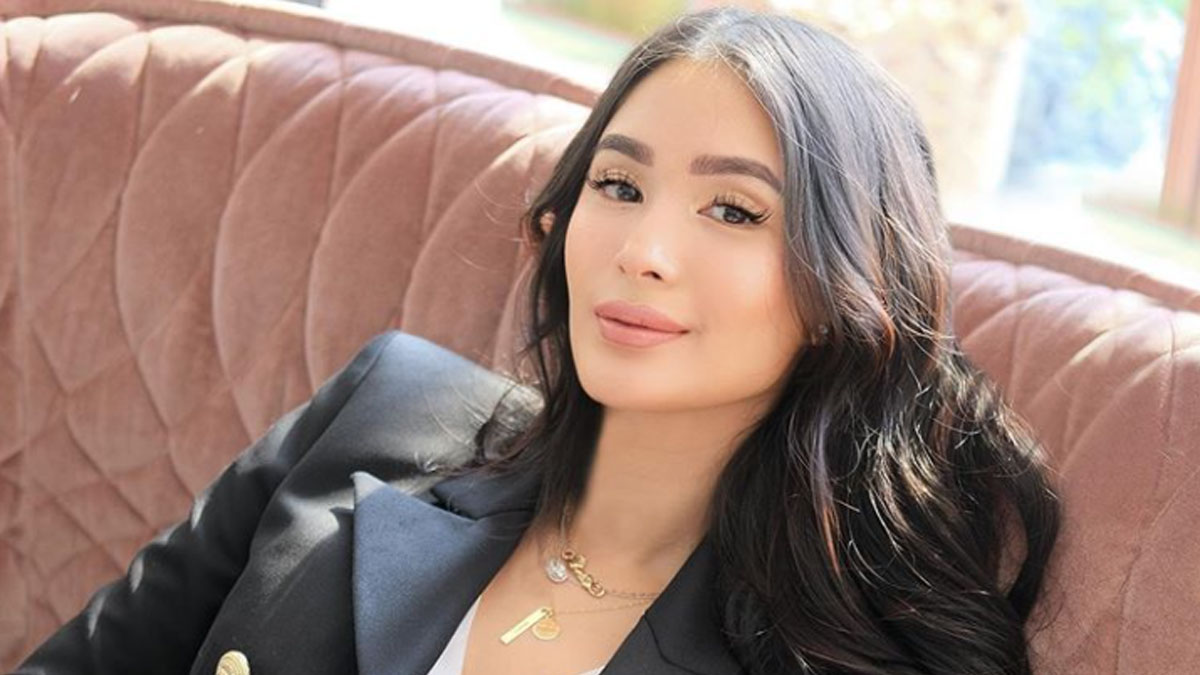 GMA-7 actress Heart Evangelista talks about being a stepmom and becoming a mother with child of her own.
PHOTO/S: Instagram

In her latest YouTube vlog, GMA-7 actress Heart Evangelista talked about what she would be like with a child of her own.

In this vlog last Tuesday, February 9, 2021, Heart clarified some of the rumors about her she deemed really crazy, like she had a child with an ex-boyfriend in Davao.

The Kapuso actress denied the rumor and said she would lovingly take care of her child if it were true.

Heart said she would, in fact, give everything to her baby. She would even stop shopping for herself so she could give more to her child.

She said, "If I had a baby, I will definitely take care of them. Oh my god, I would.

"Or I'll even give them more. I'll probably even stop shopping for myself."

Heart said she has observed it closely with her sister Camille who gave birth to her daughter Bella.

Heart recalled, "My sister? Grabe when she had a baby, she was not selfish anymore. I can borrow her clothes now."

Later in the video, Heart affirmed, "If I had a baby, whether I was young or whatever, whether I was expecting or not, I always believe that a baby is a blessing."

HEART evangelista ON GETTING PREGNANT

Heart also denied the rumors she did not want to get pregnant because she wanted to keep her figure.

She said, "Although I am very, very careful with my body, to be honest with you, I am because I am 5-foot-2 and this is my business.

"This is my job. I’m pressured also. I’m not gonna deny that. But for me to not want a baby because of that, it’s a no."

Heart further revealed she and her husband, Sorsogon Governor Francisco "Chiz" Escudero, will concentrate on having a baby once the pandemic is over.

Heart admitted it would be quite a challenge given the job of her husband.

"You only have a few days, the window is like three to five days. Kapag nagkabagyo, nandoon si Chiz [sa Sorsogon]. Selfish ba ako?"

Towards the end of her vlog, Heart pleaded to stop asking her about being pregnant.

She said, "After the pandemic guys, hintay na kayo. Stop asking if I’m buntis because I’m not.

HEART AS A STEPMOM

Heart said, "I have to treat them extra nice because I'm fully aware that I am their stepmom."

Heart, however, let on she had a hard time adjusting to becoming instant mom to two kids.

She recalled, "In the beginning, I must admit, it was very, very hard for me to adjust because I'm the youngest [of my siblings].

"And again, I never really had total freedom in my life, and then finally, when I was married, I had all the freedom.

"But then, you know, I couldn't make out with my husband anywhere in the house because we have kids.

Heart continued, "And that was really, really hard for me because... I mean, it's not hard, the make-out part, ah.

"I'm saying just the set-up was such an adjustment because I had to really mature."

Heart further opened up about her hidden woes as Chiz's wife knowing his kids would always have his full attention.

She said, "I wasn't even thinking my age. I was so much more immature during those times so it was really hard for me. I would cry.

But Heart was able to rise above her fears to forge a strong bond with her stepkids, attesting, "When you love other people even when you didn't give them the gift of life, it feels so good.

Her relationship with Quino and Chesi grew stronger when she got pregnant in 2018. Unfortunately, it can be recalled that Heart also lost her twins due to miscarriage.

She remembered the time she got pregnant, "Again, I didn't give them the gift of life but especially when I got pregnant, I really felt differently towards them because really I felt that maternal feeling.

"I felt that and I love them even more and I think they also love me even more.

"It was a whole experience for the family when I got pregnant and when I lost the babies. I feel like we also got really, really closer. But I really, really love them so, so much.

She added, "And we are fully aware that Chiz is a little bit older than all of us so, in the end, kami lang din ang magkakasama-sama.

"So yeah, I treasure them so much and I'm very, very blessed that we have two angels here at home."

"Because, you know, it's really hard to keep a household. It's very hard and they do help me a lot."