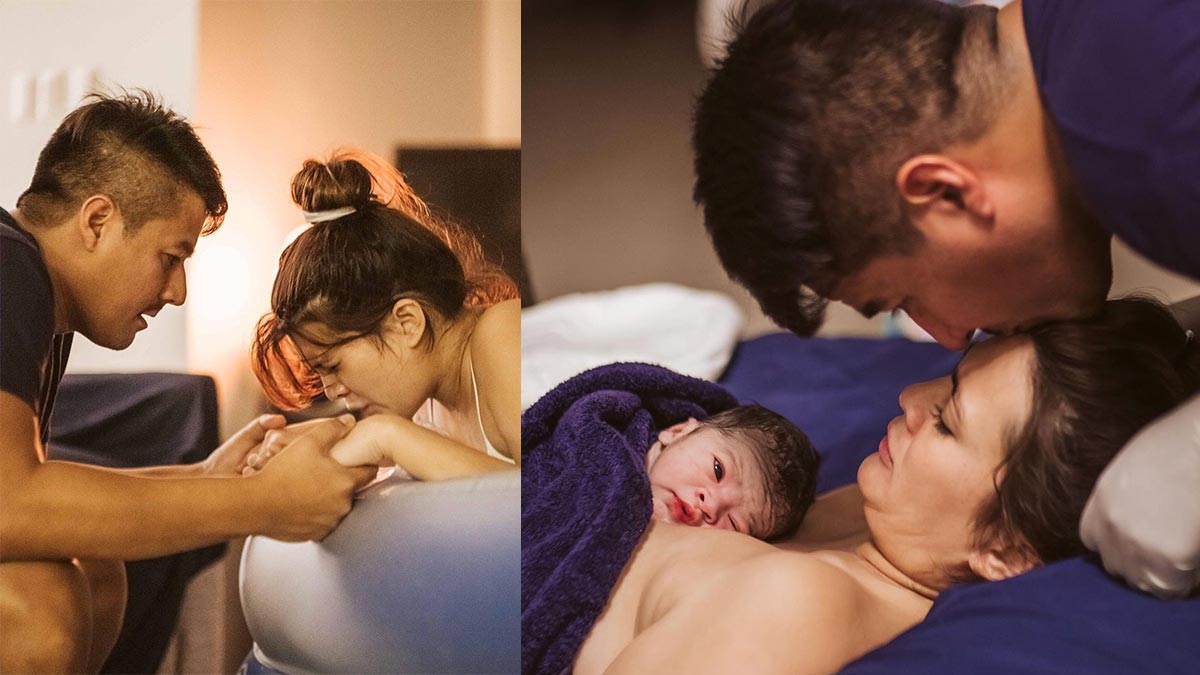 Nicknamed Quino, he was born on August 25, 2021 via water birthing at the couple's home in Davao.

But it was only last Sunday, November 4, that Katarina showed on Instagram a photo of their baby that was taken months ago, just minutes after he was born.

Her caption: "You'll be in my heart, from this day on, now and forevermore [sparkle emoji]."

On the same day, Katarina put out her vlog on YouTube her experience with water birthing.

She followed it up with a three-part series of posts on Instagram in which she shared her innermost thoughts about becoming a mother.

The former Miss World Philippines titleholder and Asia's Next Top Model Cycle 2 runner-up wrote, "In pageants they always ask, 'what's the essence of a woman?'

"I remember practicing this question for two years straight due to my pageant career.

"I was never really convinced of my own answer to this question, until early morning of August 25, 2021.

"What's the essence of a woman? Her POWER.

"Power to rule her mind and her body. Power to overcome pain that feels like death but in turn births life. The power to do whatever it is she puts her mind to."

Katarina then recalled giving birth earlier than expected, "My story begins a few days earlier than my due date.

"Nino & I didn't think I would give birth early. We were in the dining room playing board games after dinner when I went up to shower.

"I noticed a small chunk of blood come out, then called midwife Allen who then checked that I was 3cm dilated.

"I messaged my doula @doulataranii to let her know and she said she'd come over.

"Niño and I kept telling everyone I would probably give birth in another couple of days.

"Thank goodness Rain & Bren started setting everything up. I was confused bc I still hadn't felt the contractions."

Katarina felt more pain minutes before midnight, "Then nearing midnight I started to feel something like a fist pushing down on my cervix.

"This is when I knew my little boy was ready to come out.

"I had mentally repeated to myself all the advice that @maxcollinsofficial told me the night before as I grabbed my seed (like a crystal or stone to help through labor) that @frozenmarjarita gifted me.

"Little waves of pain all around my tummy and lower back and inner thighs would come and go. Still mild to moderate pain, I could still watch my kdrama."

She continued, "At around 12:30am after each contraction I would pee then throw up. I never imagined throwing up would relieve me, but it did.

"I told myself this kid is pushing my organs up bc he really wants to come out and meet everyone.

"Doula Tere, Niño and midwife Allen, all took turns massaging my lower back as the pain began to command my focus.

"My game face was on. I kept track of every wave of pain, each contraction that tested my strength, each one gradually upping its intensity.

"I focused on the time, how much break I had in between the pain to get myself together and make a plan on how to conquer the next set."

THREE AND A HALF HOURS

Katarina continued to relate the pain she endured for three and a half hours before and during water birth.

"At 2:30am my inner thighs were shaking and I felt like collapsing, this is when I knew I needed to go into the pool.

"I was leading every step of my labor, listening distinctly to every part of my body.

"Going downstairs and into the warm water relieved some of the pain, but with each contraction the pain also increased.

"Water has always been on my side, nothing could take me out of that pool.

"I remember thinking a couple of times while squeezing Niño's hands that I should just go to the hospital bc the intensity was becoming unbearable.

"But I had made a promise to myself not to speak or even think of anything negative.

"From 2:30am until 4:00am I was doing the breath of fire (if you practice yoga or breathing meditation you may be familiar with this method of breathing).

"I was counting to ten over and over again in my head. I have never counted so much ever.

"At this point it was @jazzgardiner holding onto my hands as Nino needed to help make sure the water remained at the proper temperature.

"My energy level was going down and I was drinking water every two minutes in between contractions.

"It honestly felt like I partied all night then ran a marathon right after while having period cramps (best description I can think of).

"I could feel the end of it all coming when the contractions got closer together, truly testing my mental & physical strength."

Katarina said there was a point when she just really wanted to give it a push, but her doula instructed her not to do so as her body wasn't ready for it.

"I wanted to pull Jazz into the pool and doula Tere to break my lower back bc of the pain. I asked three times if I could push, and Tere yelled to me no three times.

"But the urge felt like fire. My baby boy was demanding to come out. I kept repeating my mantra, 'I trust my body, I trust my baby, I trust my God,' over & over while listening to Jazz's voice.

"Tere yelled for me to open my eyes or it might go bloodshot as the time was very near to push. I shouted if I could push, Tere & Allen shouted back 'push!!'

"And finally at 4:02am after 3 and a half intense hours and one big push, my boy came swimming into our world."

"I remember feeling his body and legs slither down my birth canal."

Katarina also shared her realizations with her water birthing experience on the final post of her three-part series Instagram.

The beauty queen said, "I realized all four elements come into play during delivery. The element of fire present as the ring of fire, or burning sensation happening in my Muldhara, or earth chakra.

"The element of air, or breathe, in my breathing technique where fire again is present as the breathe of fire (the fast paced breathing I clung to for one hour).

"The element of earth, the humbling act of mother giving birth to child, where baby passes through her earth chakra.

"And of course the element of water, balancing the presence of fire, cooling down the burning sensations in my thighs, lower back and cervix."

Katarina likened her experience to the ocean.

"Contractions are often compared to as sets of waves. I thought of the sets that occur while surfing, trying to catch a wave or survive when you get caught in a set.

"But then I realized a woman giving birth isn't experiencing these waves, but rather she is like the ocean, the waves are a part of her. The pain and relaxation or every contraction and rest in between is an extension of the mother.

"Surrendering to my own body reminded me of how Mother Nature calls on the ocean to have episodes like that of giving birth, raging sets of waves, then calm, steady rests in between."

Ultimately, Katarina said giving birth to her baby boy has been her proudest moment to date.

"I'll keep this thought forever, a woman is an ocean of her own.

"I'll never forget how the pain suddenly disappeared when his head came out. I was shocked that there was no more contractions, no more fire, no pain.

"And there was a tiny little human floating in the water, I felt like an animal, confused as to where he came from, amazed as to how this baby came from me.

"This must be the proudest moment of my life. [emoji]"

Katarina found out she was pregnant on December 25, 2020, but it was only last August 9, 2021, that she announced her pregnancy on social media.