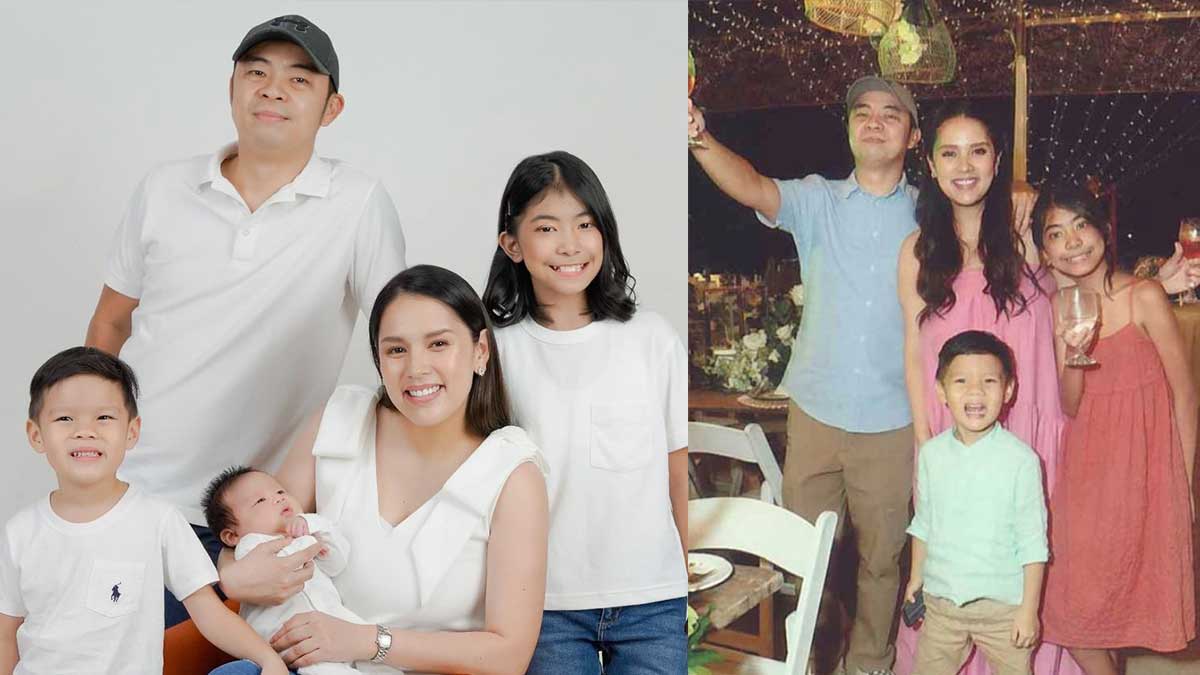 Celebrity couple Neri Naig and Chito Miranda have finally introduced their daughter Pia through a family portrait posted on Instagram on Monday, December 13, 2021. The couple already has two sons: their five-year-old panganay Alfonso and their new baby Cash.
PHOTO/S: @mrsnerimiranda / @chitomirandajr on Instagram

The photo was taken by Nice Print Photography to commemorate Neri and Chito's 7th wedding anniversary.

For the caption of her post, the actress/entrepreneur penned a sweet message for Chito and wrote (published as is), "Happy 7th year wedding anniversary, Dad! I love you so much!

"You are the best Dad and the best husband! Wala na kaming mahihiling pa. Thank you for making us happy EVERYDAY.

The netizens were drawn to the young girl in the family portrait and flooded the comments section of Neri's post with all sorts of speculations.

Neri immediately put rumors to rest by making the clarification in the comments section of her post.

"At sa mga Maritess, Pia is our daughter. Every child deserves a home and love. Period. Ok na? Gets na iyan? 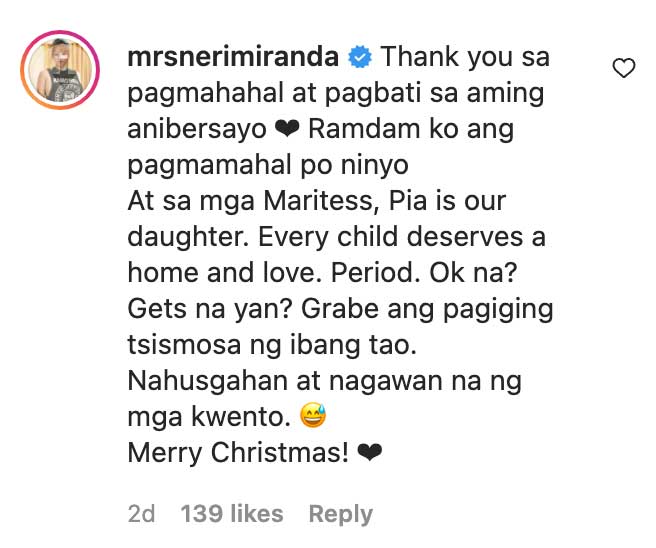 On the same day, Chito also uploaded a photo of him and Neri with Alfonso and Pia. In his caption, the Parokya ni Edgar frontman expressed how grateful he is to have a loving and happy family.

"It makes everything in life so simple. I had no idea it would be this much fun. [emoji]"

Chito also took the opportunity to advise his followers not to mind people who are pressuring them to have a family.

"Kanya-kanyang timing lang talaga, I guess...and you should never let anyone (including your parents at yung makulit mo na Tita), rush you into things.

Chito also underscored the importance of following your own passions.

"Life should be fun, at ikaw lang ang tanging nakaka-alam at makakapagsabi kung ano ang magpapasaya sayo. For me, more than anything, eto na yun. [emoji]"

The comments section of his post was also filled with inquiries about Pia.

Like Neri, Chito also clarified that Pia is their adopted daughter and confirmed that they are now in the process of officially adopting her.

Chito wrote, "@mrs.priya25 yup...she will soon be [emoji] as we are in the process of making her ours, officially. [heart emoji]" 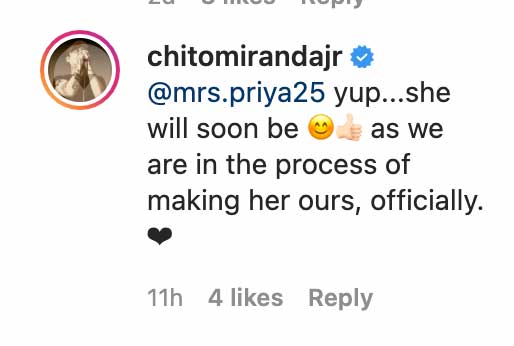 Prior to this, Pia has also appeared in several posts on Neri and Chito's respective Instagram accounts.

This includes Chito's birthday greeting for Alfonso in November 2021...

...and his Halloween post last October 31, 2021, where the family donned Squid Game costumes.

Neri and Chito got married in December 2014.

In October 2021, the couple welcomed their second son Cash.