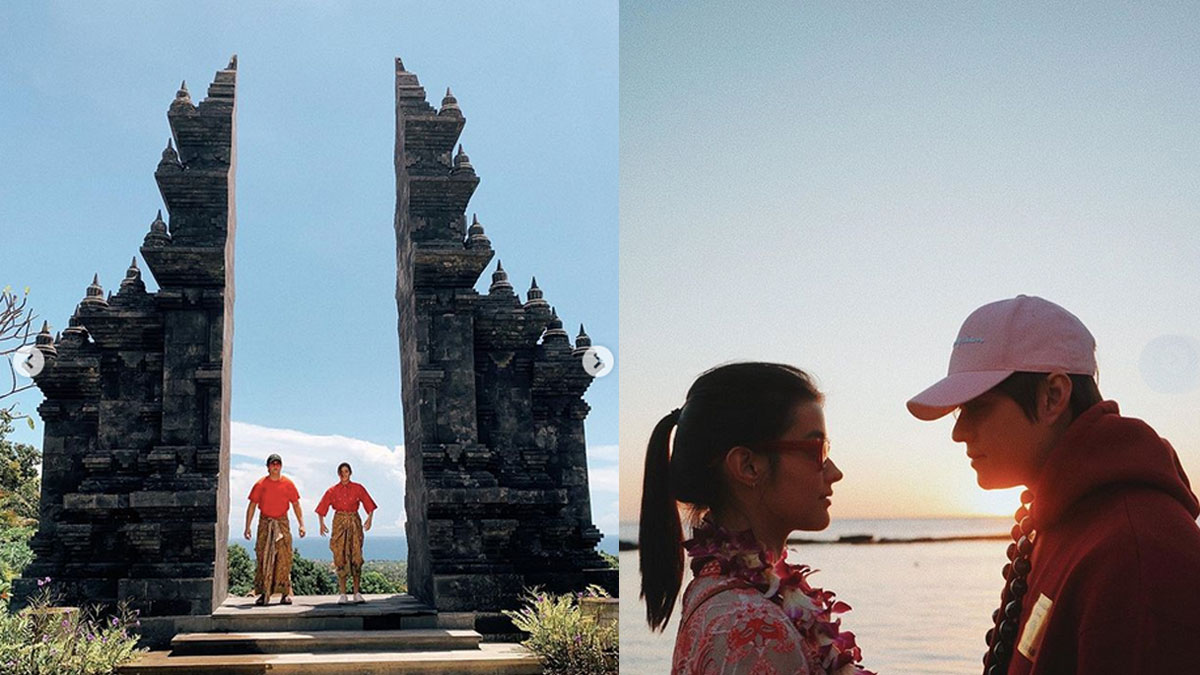 (L) Enrique Gil and Liza Soberano are currently in Bali, Indonesia. (R) An old photo of the couple taken from one of their travels.
PHOTO/S: @lizasoberano on Instagram

Enrique Gil is currently having his birthday break in Bali, Indonesia.

The actor, who celebrated his 27th birthday yesterday, March 30, is with his girlfriend Liza Soberano, whose birthday post showing a traditional Hindu gate gave away their location.

On March 25, at his contract signing with Greenwich, he revealed that the trip was a reward of sorts to himself and a treat to his squad—younger sister Diandra and Liza’s younger brother Justin.

"I think, ang treat ko po sa sarili ko is always travelling. I just go travelling with my barkada. It’s always me, Liza, my sister, and her brother. That’s our, we call it ‘the squad,’ pero yun ang barkada ko talaga."

The Kapamilya star added, "We love travelling…brought the whole barkada with me so parang blowout ko sa kanila so yun, that’s gonna be really fun, and I’m excited for that."

They’ll be staying in Bali for four days.

Enrique remarked, "Not so long because I have schedules I need to fix, there’s still a lot of stuff I need to do when I get back.

Meanwhile, Enrique had two more trips lined up this year.

"After that, may Korea pa ‘tapos maglo-London pa kami with the barkada so yun, yeah."

Travel is among Enrique’s motivations in life.

"Sabi ko talaga kay Liza na I really just wanna leave and travel the world. I wanna see the whole world. I loved traveling since I was a kid maybe because yung parents ko nasa PAL [Phlippine Airlines], so since I was a kid, tuwing may flight sila sinasama nila ko.

"May libreng trip na, ‘tapos may kasama pa, may hotel pa. So I was really used to going around a lot.

"So I’ll see on Instagram and I’ll see on social media na ang gaganda ng mga pictures and how beautiful the world is na parang I feel like I’m just so small you know in this earth.

"And you feel so small when you see all these other places like, 'Oh my god ang ganda, their food, their culture, everything.'

"We like having fun whenever we go out. So I’ll really search the net when we go to Bali. Kung anong magagandang gawin, what to do with your friends or your barkadas, you can see monkeys or ride the elephants, mga gano’n."

What’s his favorite destination so far?

He replied, "Favorite na destination na napuntahan ko so far, I think would be Fiji. Yeah I like Fiji."

Fiji is a country in the South Pacific with more than 300 islands. It is known for its landscapes, beaches and lagoons.

Enrique continued, "I don’t know, it’s uhm, I like the ocean kasi, just like a lost paradise. I like Asian, I like Asian countries kasi, I don’t know why. I like their food, they’re so much better. I won’t forget this country.

His friends are younger, closer to Liza’s age, which is 21.

Diandra has become his plus one.