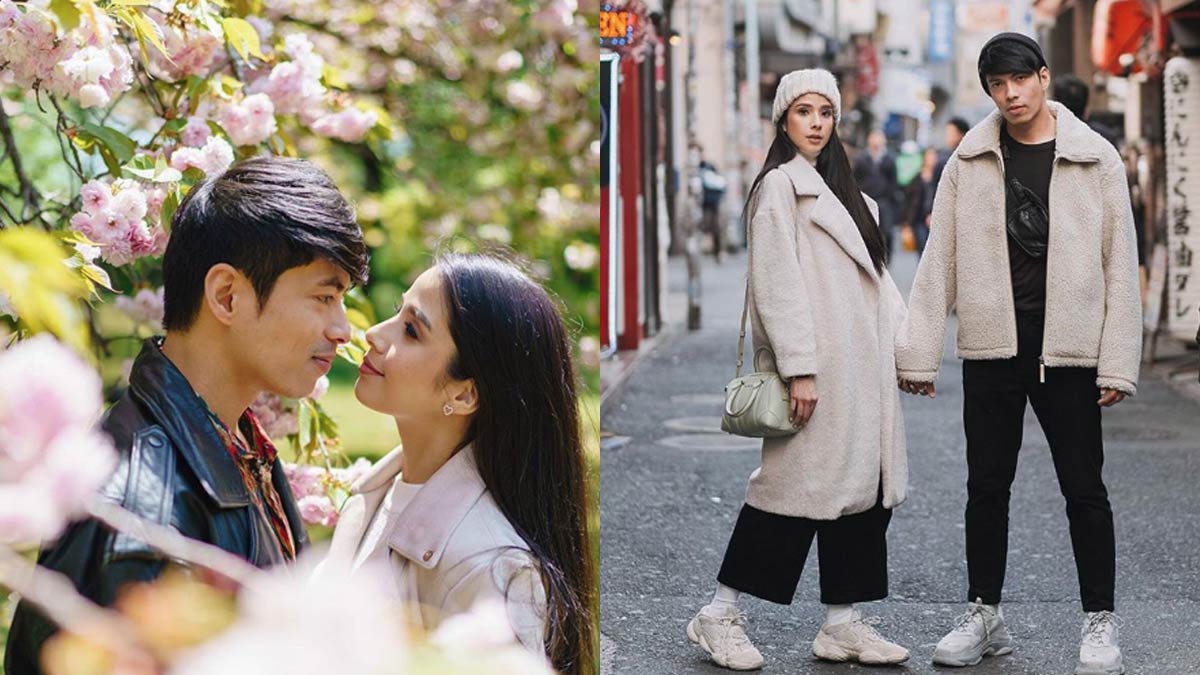 "We try to travel as much as we can. Siyempre kapag may promo fare, nakaabang kami," the ABS-CBN actress told PEP.ph (Philippine Entertainment Portal) at the recently-held Sweet Escape event in Bonifacio Global City.

Maxene said they travel a lot, but not just to see places.

Back when the 32-year-old star was single, she used traveling as an excuse to splurge.

She said, "Dati kasi, I would travel for shopping lang. Shopping or food."

All that changed after she got married to Rob.

Maxene elaborated, "He was the one who opened my eyes na, 'Hey, when you travel, you connect with people. You look at their culture. Observe.'

"Kumbaga when I started traveling with him, it was a totally different way of traveling...

"You dig deep and you use it for a different purpose, I guess?

"Since travel is already a vacation, sort of, might as well use it to influence you in a good way."

Among the cities in the world the couple had gone to were Hong Kong, Singapore, Los Angeles, New York, Paris, Lisbon, and London.

Locally, Maxene and Rob have mostly been to the beaches of Palawan, Batangas, and Boracay.

But their favorite destination is Tokyo, Japan. Why Tokyo?

"For some reason, my husband is really... he thinks he was maybe Japanese in his past life. But he loves sushi, I love Japanese food.

Maxene and Rob have experienced Japan in almost all of its seasons.

"It's a different experience every time kasi when you're there. The weather is so beautiful, the people are so nice, the food is amazing. It's the whole package.

"It's our go-to happy place. It's the place we go where we can recharge, remember our intentions. Why are we here? What are we doing here? What is this all for?

"Travel makes us go deep into life. That's really what travel does to us. That's why we love to do it!"

Their first trip to Tokyo was in February 2016.

Rob joined Maxene and family in their trip.

In August of the same year, Maxene and Rob returned to their favorite city.

Then in 2017, Maxene and Rob ushered in the New Year with their families.

After a month, on Valentine's Day 2017, Maxene got engaged to Rob under Tokyo Dome's canopy of neon lights.

Maxene posted a photo and captioned it with, "I can't wait to spend the rest of my life with you!"

In February 2018, Maxene and Rob returned to Tokyo to celebrate the anniversary of their engagement.

They returned to the same spot in Tokyo Dome to mark the occasion.

This was also their first trip to Tokyo as husband and wife.

In April, the couple flew back to celebrate Rob's birthday.

Maxene and Rob arrived just in time to witness the cherry blossoms in full bloom.

In October, the two of them went back for a quick escape.

They were joined by Maxene's brother Frank and his girlfriend Denise Buencamino.

Then in December, Maxene and Rob were in Tokyo again to celebrate their first Christmas as husband and wife.

For the first time, the couple flew to Tokyo for work in February.

Maxene was among the celebrities invited for a cosmestics brand event.

Then in April, Maxene and Rob flew to Tokyo to watch John Mayer live at Nippon Budokan, a popular concert arena.

At the same time, Rob also celebrated his birthday.

For this trip, Maxene and Rob weren't on their own.

Maxene's fellow ABS-CBN actress and Playhouse co-star Angelica Panganiban tagged along with them.

With social media as part of the daily grind, it has become common practice to use traveling as an excuse to gather new social media content.

But this practice of constantly taking photos can dampen the traveling experience, and Maxene agrees.

"That's true. When we travel, we sometimes get lost," she says, referring to the need to create new social media content in every trip.

"I will admit that there was a time na talagang you just get lost in it.

Rob, in fact, always reminds her to be in the moment when they are travelling.

The daughter of late rapper Francis Magalona says, "My husband is the one who always tells me, 'Remember when you post something, why are you posting it? What is your point for posting it?'

"And that's what really makes me take a step back.

"It makes you forget na what's really important is that experience, not the posting of the picture...

"It's just important to not forget and keep yourself in check and remember it's not just about the pictures.

"Always think: What do your pictures represent? When you post something online, what does it represent?

"If it represents something meaningful to you, then go ahead and post it. But if not, it's up to you…

"It's a free world. We should get to do what we want to do. But for you lang, personally, don't forget why you're posting something and don't forget the meaning behind it."