Celebrities and their multi-million peso yachts

Gretchen Barretto and Jinkee Pacquiao both have private yachts.

When luxury cars and motorcycles aren't enough, a few celebrities buy themselves a luxury yacht.

Some use it for island hopping; others use it as the venue of their parties.

Here are celebrity-owned yachts that made headlines.

Boxing champion/politician Manny Pacquiao bought it for PHP25 million as a Christmas gift to his family in 2011.

According to the report, the vessel was considered the "Ferrari" of yachts. It could also carry three jet skis.

In May 2017, Jinkee gave a sneak peek of what's inside their yacht during a summer bonding session with her family.

The first one is the M/V Wow Cruiser I, a 94-footer yacht which he bought in 2008 during the heyday of his now-defunct Kapamilya noontime show Wowowee.

According to GMA News, Willie's yacht then cost around PHP80 million.

The second one, smaller in size, is called M/V Wow Cruiser II.

Talent manager Annabelle Rama celebrated her 56th birthday in these vessels in 2008.

One of Gretchen Barretto's favorite settings for her Instagram photos are their yachts.

She and her long-time partner, business tycoon Tonyboy Cojuangco, own two yachts.

One was named after their daughter Dominique.

The 47-year-old actress fondly calls it "The Bapor," which means boat.

An Instagram follower with the handle name @mckaysalesa commented, "Yacht over yacht...yours must be the mega yacht @gretchenbarretto?"

Gretchen replied, "@mckaysales both belong to us"

THE ESCALERA AND M/Y HAPPY LIFE

One is called The Escalera, which came with a massive US$4 million (around PHP180 million) price tag at the time it was purchased.

It was also used by Annabelle as one of venues for her 56th birthday in October 2008. 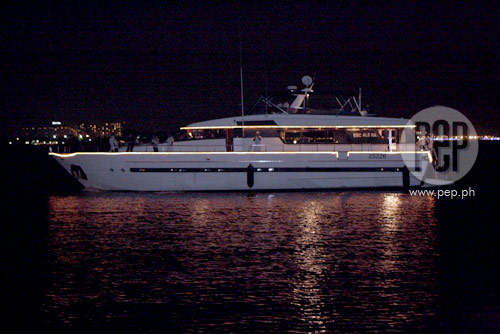 At the time, it had a staggering price tag of US$12 million or around PHP600 million.

Currently docked at the Manila Yacht Club, it ferried some of the Miss Universe 2016 candidates between Manila and Batangas province during one of the pre-pageant events.

Courtesy of Department of Tourism