"I love you, Mama. Go to the light."--Chin-Chin Gutierrez 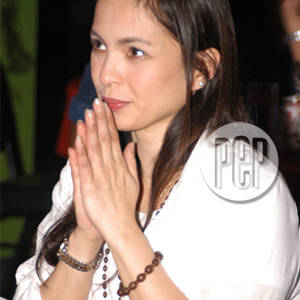 Chin-Chin Gutierrez says her watch and the rosary on her arms—the only worldly possessions she saved from the fire—are instructions from God telling her "to watch and pray."

In a rare public appearance since her mother passed away and she lost her home to a fire, Chin-Chin Gutierrez appeared at the Cheers to Life concert last January 15 at Merk's Bistro and Bar in Makati City.

The fundraising concert was organized by fellow artist Richard Merk to lend support to Chin-Chin, whose house burnt down last December 20. On January 12, or only 23 days after the fire, her mother, Cecilia Arnaldo Gutierrez, died from cardiac arrest.

Chin-Chin looked peaceful despite having gone through two traumatic events in her life one after the other. She calmly recalled her mother's "crossing over" at the intensive care unit (ICU) of the Medical City hospital in Pasig.

The actress-environmentalist said that it was "a peaceful send-off. I was right there by her side during the last few hours, whispering to her all the things that she could receive in heaven."

In the midst of this painful moment in her life, Chin-Chin never fails to affirm her unwavering faith in God.

"God really gave her time and gave us the grace of life to be spared from the fire and to see her friends in the ICU and the people who visited her. [She was able] to recover from the shock of the fire, her vital signs were okay. Then it was her heart that got weak.

"I think she was full of love and prayers and songs...until her heart just slowly stopped. She was not having a hard time," she said.

Chin-Chin also said that she was with her mother up until she drew her last breath. "I was by her side just in time na nalagutan siya [ng hininga], pero she was revived and she was still [breathing] on her own, her heart was pumping, and then I told her, ‘Go to the light.' Di ko alam kung bakit ko sinabi yun... Para bang ginagabayan na ko ng Diyos kung ano ang sasabihin ko sa kanya. True enough, she started to smile and started to look up and I said, ‘How lucky, I'm right there when she is about to cross over.'"

Chin-Chin's last words to her mother were: "I love you, Mama. Go to the light."

She continues: "She was smiling so sweetly and looking up na. The priest came and gave her Extreme Unction [the final rites of the Catholic faith]."

CHEERS TO LIFE. Chin-Chin, who has been an active advocate of the arts and the environment, now became the beneficiary of a lively concert that included Mon David, Giselle Sanchez, Noel Cabangon, Gary Lising, Danny Javier, Buboy Garovillo, among others.

In response to this outpouring of support from fellow artists, Chin-Chin responded: "My mom is participating here also, watching us from above. We have a very strong intercessor now since she was a very strong missionary. We can pray for her and also pray to her. Now, she can intercede for us for our own individual missions in life.

"I'm just here to receive, graciously, what has been initiated by Richard Merk as well as family and colleagues of artists—beautiful souls who are here tonight.

Even with her mother gone, Chin-Chin is convinced that her connection with her mom remains strong. "There are times when I feel my heart beating hard...alam ko niyayakap niya ako."

Mrs. Cecilia Arnaldo Gutierrez, a former Franciscan nun who served in Italy, named her daughter "Carminia" after the flower of the Sacred Heart. Her daughter's nickname, "Chin-Chin," is the Italian greeting for "cheers to life."

Mrs. Gutierrez's body was interred at the Arlington Memorial Chapel on Araneta Avenue, Quezon City. Her remains were buried at the Loyola Memorial Park in Marikina City last January 17.