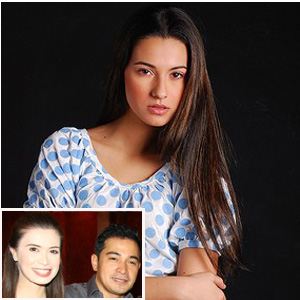 Mariana del Rio is also known as the Samba girl for her endorsement of a corned beef brand. The half-Filipina, half-Brazilian model is currently figuring in a showbiz controversy—she is reportedly the "third party" that caused the split of celebrity couple Sunshine Cruz and Cesar Montano (inset).

Cesar Montano and Sunshine Cruz have been causing a rumpus in select showbiz circles for almost a week now. The couple, according to sources, are already "separated." The detailed report of the said issue was put out in PEP (Philippine Entertainment Portal) at 2:07 in the morning today, December 29.

Cesar already confuted the rumors, saying that what happened was just "one of the tampuhan of mag-asawa." In a statement he sent via text to PEP Editor-in-Chief Jo-Ann Q. Maglipon, he stressed that it's one of his wife's "childish reactions on things," and that his detractors fed Sunshine with text messages that "poisoned her mind."

Sunshine, with her three kids, reportedly left their house in Quezon City last December 25 after a fiery argument with Cesar about his "affair" with a Brazilian model named Mariana del Rio.

Cesar, in his phone conversation with Maglipon last night, said he's "hurting." Sunshine, for her part, sent a text message to the Editor-in-Chief of PEP: "Not ready to talk now. I am hoping that this matter wud be settled. I love my family so much."

How about Mariana? How does she feel about her name being dragged into this issue as the "third party?"

In his effort to present all sides of the story, Cesar directed PEP to Carla de Mesa, Mariana's best friend. Carla, who was also with the model when they met Cesar at the airport, spoke on behalf of Mariana—who is currently in Sao Paulo, Brazil, and was "scared like a kid" when she heard about the issue.

PEP: How is Mariana now?

Carla: She's in Brazil. When she read the article, she reacted like any normal kid—scared.

PEP: Let's go to the first rumor, is it true that Mariana is seen regularly with Cesar in the gatherings of Pinoy Mano-Mano?

Carla: No. He invited us but we're not able to come.

PEP: Why would Cesar invite them?

Carla: Because we're trying to have a movie...indie film...three indie films.

PEP: How did Mariana meet Cesar?

Carla: At the airport in Bohol last September. Nagkita kami. We were in group. Marami kami.

PEP: So, Cesar and Mariana really saw each other in Bohol?

Carla: Yes. But Mariana was there for a modeling engagement. We had a purpose in going there. Si Cesar was there because of the premiere of that movie with Maricel Soriano...Gawad Kalinga.

PEP: Did you guys go to the house of Cesar in Bohol?

PEP: What about the resthouse in Bulacan?

PEP: According to rumors, Cesar tried to let the young model believe that he and his wife are already separated by telling Mariana that Sunshine doesn't have a single photo in either of the two houses of the Montanos. You guys visited their homes in Bohol and Bulacan, is that true?

PEP: So, Mariana never visited the set of Pinoy Mano-Mano?

PEP: A source claimed that Sunshine saw a picture of Cesar and Mariana during the Christmas party of Pinoy Mano-Mano.

PEP: So there's no truth to the "affair" rumors?

PEP: Do they text each other?

PEP: Would you know if Cesar has a code name for Mariana in his phone book?

PEP: What about Cesar? The way he treats Mariana?

Carla: Purely business from his end.

PEP: Does Mariana know about the issue?

Carla: Yes, I called her. She really want to be an artista, but when she found out about this, sabi niya, "I don't wanna be like that if that's what's gonna happen." She's just sixteen years old. Ex-bf niya si Victor Basa. Parang fling. Madalas sila sa Embassy noon. She's not the type who would settle with Cesar."

At press time, the mother of Cesar's three girls has not yet released her side about the said issue. In Startalk's episode today, December 29, Sunshine's manager Alfie Lorenzo, however, said his ward had told him, "Ninong, aalis na talaga ako." And the talent manager added, "Desidido na siya."