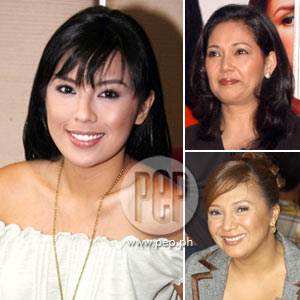 Nothing beats the feeling of working with the likes of Maricel Soriano and Cherry Pie Picache. Just ask young singer-host Nikki Gil.

"Sometimes intimidating," said Nikki to PEP (Philippine Entertainment Portal) in a recent conversation in time for the release of her second album Hear My Heart under EMI Philippines.

Nikki is included in the cast of ABS-CBN's upcoming drama series Florinda, which is also the third installment of Sineserye Presents: The Susan Roces Cinema Collection. The first two were Patayin sa Sindak si Barbara and the recently concluded Maligno.

That feeling of anxiety is of course a given especially for a "neophyte." Professionally speaking, it was a teacher-student relationship. But what made the entire experience extra-special and even humbling for Nikki was that Maricel and Cherry Pie willingly played the mentor role by constantly giving her tips and even a pat on the back.

"Tuturuan ka nila. They want you to grow and it's really exciting because makikita mo ‘yong development mo and they'll tell you, ‘In fairness sa ‘yo, maganda ‘yong ginawa mong ganyan.' So very exciting and it's an honor and a privilege to be working with them," Nikki proudly enthused.

FEELS LIKE THE FIRST TIME. Nikki is no stranger to acting in front of the camera. Aside from hosting and doing video shoots to support her singles, the Ateneo de Manila University English Literature major had also done a number of TV shows like Rounin, Pangarap na Bituin, Komiks Presents, Your Song, Love Spell, among others. Just last year, Nikki appeared alongside John Lloyd Cruz and Bea Alonzo in the blockbuster film One More Chance.

Still, and despite the credentials, Nikki feels that her biggest acting break so far would definitely be Florinda.

"Florinda,ito ang aking acting debut," she smiled before correcting herself, "actually, not really."

She added: "I've done a couple actually. But this one is, I guess I could say the most official because Maricel Soriano ang kasama ko diyan, e....Sabi ko nga, if anything, let's say ma-shelve ‘yong project or if anything happens, I would be happy enough to have worked with Ms. Cherry Pie Picache and Ms. Maricel Soriano. Because seriously, I learned a lot. I learned a lot and feeling ko, working with them defeated any other workshop that I've been through."

Nikki is keeping an open mind as far as her acting career is concerned. She's undoubtedly serious in learning the craft, but it is still up to the public to decide whether she should continue or not.

"It's just something I enjoy doing," said Nikki on acting. "But if people don't like to see me act, may mga ganoon, e, di ba? tipong ‘Mag-host ka na lang' or people are like ‘O, parang hindi bagay' then I guess I have to give it up... frustrated actress kasi ako e," she giggled.