TV5 introduces its own homegrown stars via teen show "Lipgloss" 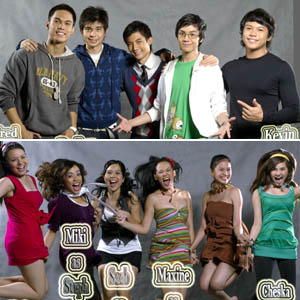 Lipgloss is a loose adaptation of the hit TV series Gossip Girl and follows the lives of the students of an ultra-exclusive high school through the school's "unofficial" website.

Joining them is fresh talent Kevin Lapena as the main lead boy Edge. A high school graduate of Don Bosco Makati, now a college sophomore of De La Salle, he fits in perfectly to the exclusive-school boys Rodjun of De La Salle high school, Fred from Colegio San Agustin, now of De La Salle, and Mikee of Ateneo from elementary to college.

Three other three new girls are Cheska Ortega playing Ziggy, the younger sister of Edge, who is formerly from Poveda and had to transfer to Reedley International School dahil hindi siya pinayagang mag-artista; Charina Suzara, playing the wannabe rich girl Julivee, is a student of OB Montessori; and Mary Grace Perido, the loner skating champ Louise, is from San Agustin College in Cavite.

Another Star Magic talent Miki Hahn plays the bad girl Steph. She is the only member of the cast who stopped schooling after finishing high school.