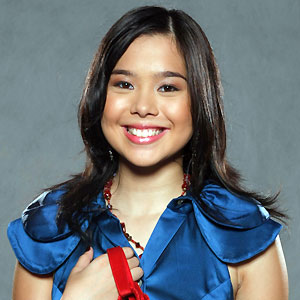 "She's my Ate, of course. I know she loves me and I love her, too. But we can't always be agreeing about everything," says Saab Magalona about her sister Maxene.

Saab is the fifth of the eight children of Master Rapper Francis Magalona and wife Pia Arroyo. Next to elder sister Maxene, Saab is the second of the Magalona siblings who decided to follow in their father's footsteps.

A couple of days before the Lipgloss presscon, PEP (Philippine Entertainment Portal) got a report that Saab had left their home after a fight with her dad, and is now living in with her boyfriend.

Saab, who came late at the presscon, was obviously caught off-guard by the report since she thought that she would be asked about their show. But she answered the issue anyway.

Francis M has been diagnosed with leukemia this year and is presently undergoing treatment.

Although Saab denied having a fight with her father, she admitted that she has a "little rift" with sister Maxene.

"You know, sa lahat naman ng magkakapatid may mga away-away," the 20-year-old newcomer explained. "But just now, I think we need time apart. Kasi, we've been together our whole lives. Now, we're growing up and I think that it's time for us to... Kasi we've always been sobrang [close]. Matching kami ng suot, magkasama kami in everything. Pareho kami ng birthday, 'sakto, so lagi kaming sabay ng celebrations. It's too much togetherness."

Saab added, "Nagka-clash kami. Like, when I have my own... If I disagree with her a bit, siyempre she can't really understand why... She's my Ate, of course. I know she loves me and I love her, too. But we can't always be agreeing about everything."

Although Maxene is two years older than Saab, they share the same birthday: November 23.

Is it because of Maxene that Saab left their house?

"No, not because of her," Saab pointed out. "I just want to be independent and I want to... Kasi, actually, we don't live at home na, e, all of us [the elder ones]. Kasi, we're all in college. We don't live at home, we live in a condo.

"I used to live with Maxene and my older brother across Ateneo. But now, I live in a different place na I don't want to disclose. But I don't live with my brother and sister anymore. But we all don't live at home because my parents believe na if you're in college, you have to live on your own."

What about the rumor that she is now living-in with her boyfriend?

"Hindi, oh my God!" she exclaimed. Saab clarified that the friend she is staying with now is a girl.

Saab also said that whatever problem she has with Maxene will soon be resolved, although she admitted that they hardly communicate nowadays.

"We're not as close as before. It's something you can't really avoid when you grow up, e. We've been best friends our whole lives, but right now—," she said without finishing her sentence.

Saab disclosed that she is now paying for her tuition, at least, in the last two semesters—thanks to her talent fee from Lipgloss.

Lipgloss, where Saab plays the role of the heroine Meg, is aired on TV5 every Saturday at 6 p.m.