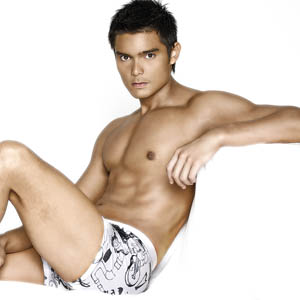 Actor Dingdong Dantes becomes the first Filipino and the highest-ranked Asian in this year's E! Sexiest Men of the World. He ranks third behind soccer superstar David Beckham and Argentinian actor Michael Gurfi.

PEP (Philippine Entertainment Portal) was able to get the complete list of E! Television's Top 25 Sexiest Men of the World this year, which includes our very own Dingdong Dantes. The Filipino actor ranked third overall with soccer superstar David Beckham from the United Kingdom topping the list.

This special feature of E! was first aired in the United Kingdom and is also scheduled to air in the United States and Asia. According to Mr. Potter, their feature on the Top 25 Sexiest Man of the World was one of their highest-rated shows.

Here is the complete list of E!'s Top 25 Sexiest Man of the World:

1. DAVID BECKHAM (soccer player, United Kingdom) - He's the man by which all others must be measured. An English football player in the England National team. In 2004, he was the world's highest paid football player. Married to former Spice Girl's Victoria Beckham, with whom he has three children. He now plays for Major League Soccer Club for Los Angeles. He has been two-times runner-up for FIFA World Player of the Year.

2. MICHAEL GURFI (actor, Argentina) - What makes him most attractive are his dreamy deep-set eyes and mysterious smile. An actor and one of the lead of telenovela Amores Cruzadas.

3. DINGDONG DANTES (Actor, PHILIPPINES ) - Dingdong's name seems to be so interesting, different, and sexy for all those celebrities that described him. He was introduced as a fine Filipino fellow who was born in 1980 with the name Jose Sixto Dantes III, but his friends call him Dingdong.

Most of his accomplishments were mentioned including his different endorsements like Bench Body model, his being No. 1 Bachelor by Cosmopolitan Magazine and his numerous hits, such as his TV series and movies, and his being a well-known actor in the country.

Some of the celebrities who gave him good words and reviews were Robbie Laughlin (stylist), Leean Tweeden (TV host/sportscaster), Khloe Kadarshian (Keeping Up with the Kadarshians), Carrie Ann Inaba (judge, Dancing with the Stars), Joel Stein (columnist, Los Angeles Times).

4. JONATHAN RHYS MEYERS (actor, Ireland) - An actor who is best known for playing Henry VIII in the television drama, The Tudors. He also works as model, most notably as model for Club Monaco, Versace, and Hugo Boss. They find his eyes and lips very sexy, too.

5. DJIMON HONSOU (actor, Benin) - A model turned actor. Seen in Madonna's music video as the super hot guy and in Janet Jackson's MTV. But his real eye-popping contribution was when he posed for Calvin Klein. His debut film was Without You I'm Nothing and had television parts in Beverly Hills 90210 and E.R. and guest starring role in Alias. He received nominations for the movie Blood Diamond and In America.

6. TYSON BECKFORD (model, USA) - One of the world's first black supermodes. In 1993, Ralph Lauren recognized his bronze and tattooed body for making him the label's front man. He has regular features in GQ and Vogue. He's also into few movies.

7. FREDDIE LJUNBERG (football player, Sweden) - Football player and is a model for Calvin Klein underwear. He also represented other brands such as Nike, L'Oreal, Puma, and Pepsi. He was the captain of the Swedish national tram until he announced his retirement at the Euro 2008.

8. JOHNNY DEPP (actor, USA) - Three-time Oscar nominee for the movies Pirates of the Caribbean: The Curse of the Black Pearl, Finding Neverland, and The Demon Barber of Fleet Street. He started his career in the television series 21 Jump Street. His first major role was in the 1984 movie A Nightmare on Elm Street. Depp is one of Hollywood's most popular actors and is known for his acting and sex appeal.

9. RYAN REYNOLDS (actor, Canada - Started his career as a child actor. He was first known in comedy films, but later on appeared on dark characters such as in the remake of the horror movie The Amityville Horror, Blade: Trinity. In 2009, he will appear in X-Men Origins: Wolverine.

10. JOHN ABRAHAM (actor, India)- A Bollywood actor. Most famous male model of his generation in India. He's also the Goodwill Ambassador of Habitat of Humanity.

12. RAOUL BOVA (swimmer, Italy) - A national swimmer who has a lean 6-ft. frame. Featured in serious sexy ads. From doing Italian films, Raoul was able to do an English film, Under The Tuscan Sun with Diane Lane.

13. ENRIQUE IGLESIAS (singer, Spain) - One of the most popular artists in Latin America. The youngest child of Julio Iglesias and Filipina socialite and Hola! magazine journalist Isabel Preysler.

14. DAVID ZEPEDA (actor, Mexico) - One of the lead actors of the telenovela Amores Cruzadas. In U.S., he appeared in TV shows such as E.R. and Buffy, The Vampire Slayer. Last 2000, David placed 1st runner-up in the Manhunt International held in Singapore.

15. EDISON CHEN (actor-singer, China) - He was born in Canada but is considered as a Chinese superstar. A movie actor, rapper, singer, and pop icon, he thought of leaving showbiz when sex photos of him with other actresses circulated, though he denied it and said that it was all fabricated.

16. RODRIGO SANTORO (actor, Brazil) - For his role in the movie 300, Rodrigo became the first Brazilian actor to be nominated in the MTV Movie Awards. He was also part of the cast of the movie Love, Actually and the television series Lost.

17. GILLES MARINI (model-actor, France) - Full-time model and part-time actor. His shower scene in Sex And The City movie made him even more desirable. He also joined the cast of Ugly Betty.

18. MARCUS SHEKENBERG (model, Sweden) - A supermodel and actor. He has appeared in television and movies. He was discovered by a Mexican photographer while rollerblading. He is also known for his Calvin Klein ads and for dating Pamela Anderson. At the age of 24, he was named one of the most beautiful people on the planet.

19. KOSTAS MARTAKHS (singer, Greece) - First discovered via a talent program show called Dream. His sexy music video was a talk of the town and is Greece's most popular pop star.


20. TAKESHI KANESHIRO (actor, Taiwan) - They call him the Johnny Depp of Asia. A famous Asian actor of mixed heritage. His father is Japanese and his mother is a Taiwanese. Takeshi's 1992 pop album, Heartbreaking Night, was his first foray in showbiz. He also appeared in several movies and miniseries.


22. ERIC BANA (actor, Australia) - His first venture into show business was as a stand-up comedian. No one thought he would become a drama actor. He has appeared in movies such as Hulk and Troy.


23. MARK VANDERLOO (model, Netherlands) - He was just
accompanying his girlfriend when he found himself modeling for the first time. A Calvin Klein model and one of the first male supermodels.


24. REYNALDO GIANECCHINI (actor-model, Brazil) - Actor of different telenovelas and a model as well.


25. MICHAEL LEWIS (model-actor, Israel) - At 19, he has graced several magazine covers when he first became a model at the age of 17. Now, he's considered Israel's most famous male model.