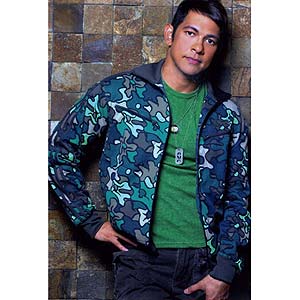 "When we send out or there is a vision like this that will require people to get involved, the [La Salle] community will get involved," says Gary Valenciano, who calls on fellow La Sallians to watch his two-night concert called "Back Home" on June 5 and 8. This is part of the 50th anniversary celebration of La Salle Greenhills in Mandaluyong City.

Mr. Pure Energy Gary Valenciano believes that one way of giving back is through his music.

"The music kasi that I do, it's inspirational, a lot of it is inspirational in nature," he told PEP (Philippine Entertainment Portal) after the media junket prepared for his upcoming concert called Back Home yesterday, May 21, at the La Salle Greenhills in Mandaluyong City.

The two-night concert will serve as the highlight and culminating event of Sing-Kwenta, a series of mini-shows celebrating the 50th anniversary of La Salle Greenhills which started in September 2008. It will be shown on June 5 and June 8 at the Bro. Rafael Donato Center for the Performing Arts at LSGH.

Gary added that his participation in his alma mater's golden anniversary is an example of how he reaches out to people. He explained, "Para sa akin, I've been given the task, and I'm taking that task to meet people in a very, very personal level, where in you can be at the Araneta Coliseum or you can be here at the Bro. Rafael Donato Center for Performing Arts and capture something. For me, that's my way of giving back.

"I really don't have to do inspirational songs. I can do whatever people are dancing to. But somehow, I sense and I feel in my heart that there's a need that needs to be met. Even if it's a small way, at least to make somebody, even one person out of 15 thousand people... Kahit isang tao lang na maramdaman niya o maintindihan niya kung ano 'yong dinadaanan ko, then I've given back."

In his upcoming concert, Gary V. will not only inspire people with his songs, but also help the two charitable projects of La Salle Greenhills—the Bahay Pag-asa and the One La Salle Scholarship Fund

Bahay Pag-asa is a rehabilitation center for street children and children who have encountered problems with the law, while One La Salle Scholarship Fund is a project that aims to raise one billion pesos to help fund 20 percent scholarships in each of the 18 De La Salle schools in the Philippines by 2011.

Aside from performing for a cause, the singer-composer added that Sing-Kwenta also depicts one distinct characteristics of La Sallians, "community is very much like family."