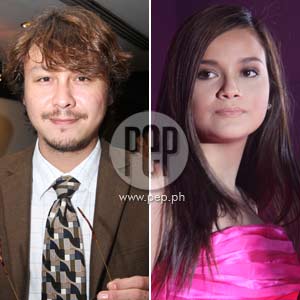 The incident reportedly happened on the set of Suspetsa, where Baron Geisler (left) and Yasmien Kurdi (right) are the new soap's lead stars.

According to a non-showbiz source of PEP (Philippine Entertainment Portal), who said the information came from people present on the set of Suspetsa last May 21, Baron reportedly approached his co-star, Yasmien, and then, without warning: "Minanyak si Yasmien. Sinilipan, hinihipuan, tapos nag-baté [masturbated] sa harap niya."

In a scene where Yasmien, who was wearing a dress, was supposed to go up a spiral staircase, Baron, according to the source, waited for Yasmien to go up, "para silipan." After the take, Baron allegedly masturbated in front of Yasmien.

The scene, added the source, was witnessed by two people: actress Jennylyn Mercado (Yasmien's fellow 2003-2004 StarStruck winner) and Yasmien's PA (Personal Assistant). Supposedly, the PA was also able to record the incident with a cellphone camera.

Since then, Baron has reportedly been "begging" Yasmien not to push through with the case. He is said to have appealed to her by saying that his mother was in the hospital and that he already has an existing case against him.

As of Mother's Day, May 10, Baron's mother, Gracia Bayoneto, was in fact in the hospital. And the existing case he referred to was for acts of lasciviousness filed against him in April 2008 by Patricia Martinez, daughter of William Martinez and Yayo Aguila.

Also according to PEP's non-showbiz source, Baron has repeatedly apologized to Yasmien, claiming that he could not remember doing what was said he did.

As of press time, Yasmien has not withdrawn her complaint.

PEP tried to get Baron's side several times this afternoon. The many calls to his cellphone were unsuccessful, with his phone just registering: "Subscriber cannot be reached." We did get hold of his household through his landline at past 5 p.m. A woman who said she was Baron's aunt answered the phone. She said, "Hindi ko alam kung nasaan. Kararating ko lang galing office. Ako lang ang tao dito. Tatawag na lang pagdating."

We are still waiting for Baron's call.