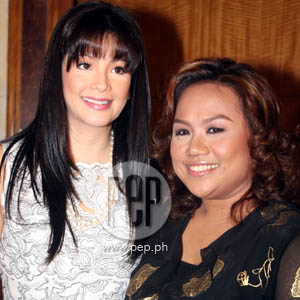 Regine Velasquez (left) will portray herself in SRO Cinemaserye Presents' upcoming story of Eva Castillo's (right) life. Eva and Regine used to be rivals during their amateur singing days.

Regine Velasquez's role in the rediscovery of former arch-rival Eva Castillo continues. This time around, Asia's Songbird will portray herself in GMA-7's upcoming SRO Cinemaserye Presents: The Eva Castillo Story, which will premiere on July 23.

Eva and Regine had a long history together as the two were considered the toughest rivals during their amateur singing days, with the former emerging triumphant on most occasions. Regine turned out to be more successful, however, in entering mainstream show business. In contrast, Eva's troubled personal life doomed what was supposed to be a promising singing career.

The two were reunited recently when Regine staged a homecoming concert in Bulacan, titled Roots to Riches. Instead of renewed rivalry, friendship between the former stage competitors was rekindled with Regine helping Eva to regain her childhood dream.

For someone who knew Eva during the time she was actively showcasing her singing talent, Regine confessed feeling sad when she saw her former stage nemesis again after years of constant struggle.

HAPPY FOR OGIE. Regine couldn't contain her happiness either for the current success of boyfriend Ogie Alcasid's acting career, both in television and the big screen.

Ogie's upcoming movie, OMG (Oh My Girl), will be shown this coming July 29.

Curiously, Ogie's role in OMG! somehow resembles his Desperadas 2 character since the talented comedian-singer will once again assume the role of a woman.

"But I'm really happy for him. Sana panoorin ninyong lahat 'yong OMG!. It's a beautiful love story more than anything else but it's also very funny," said Asia's Songbird, who has a cameo role in the movie.