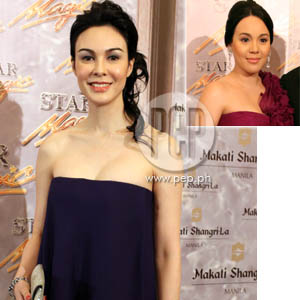 She arrived at the 3rd Star Magic Ball without any jewelry but her bejeweled feet became the highlight of her simple outfit. Ivarluski Aseron designed the purple tube dress that she wore for the party while her shoes were from luxury Italian designer Giuseppe Zanotti.

"I'm going with the times. Siyempre, dapat simple," said La Greta about her choice of wardrobe.

There have been reports that she and her sister Claudine Barretto will be starring in a teleserye together. Is this true?

"Yes, in a few weeks, magte-tape na kami ng teleserye," she said. But when pressed for some details about it, Gretchen said she needs to wait for their press conference so she and Clau could announce it together.

Who are their leading men?

Why did she choose Derek?

"Cute siya, di ba? Kailangan pa bang sabihin yun?" she said, eliciting laughter from the members of the press who interviewed her on the red carpet.

Did she have any hesitation about accepting this project?

Does she get hurt by negative criticisms regarding her acting in past projects such as Maalaala Mo Kaya?

Has it always been a dream working with her sister?

Did they have problems with regards to the billing of the teleserye?

According to Gretchen, this teleserye will probably air by November.

Members of the press also had the chance to talk with Claudine Barretto that night. But when we asked her about this upcoming teleserye, she merely replied, "Tingnan natin kung maaayos ang lahat."

U.S. TRIP. Gretchen revealed that she recently came from the United States, where she visited San Francisco and New York.

How was her trip abroad?

"Ngayon, all of a sudden, Tony is in Manila while Dominique is at camp. Ako lang, si Bettina at ang yaya ko. I had all the time in the world to think of me, for the moment, ito lang. And parang nakaka-energize and liberating also for me."

ON RUFA MAE'S ENGAGEMENT. Just lastSunday, August 30, it was reported that Rufa Mae Quinto is already engaged to be married to a non-showbiz guy. (Clich here to read related article). What is Gretchen's reaction to this news about her friend?

But does she know about Rufa Mae's house in the United States?

Is there anything that prevents her from getting married?