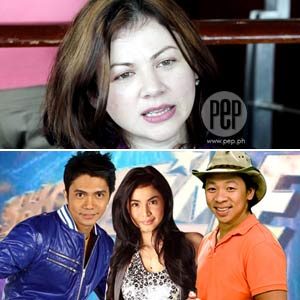 Rosanna Roces's (above) statements against teachers resulted in the decision of the MTRCB to suspend Showtime for 20 days. The ABS-CBN variety show is being hosted (below, from left) by Vhong Navarro, Anne Curtis, and Kim Atienza.

The Movie and Television Review and Classification Board (MTRCB) has imposed a 20-day preventive suspension on ABS-CBN's daily variety program Showtime. This resulted after the "uncalled for" statements made by judge Rosanna Roces against the teachers on the show's January 7 live episode.

In the said incident, after the performance of a group from Calamba, Laguna, Roces asked one of the contestants about the name of national hero Jose Rizal, who hails from Calamba. The actress asked the contestant how come Rizal's full name is Jose Protacio Rizal when his father's name was Francisco Mercado and his mother's name was Teodora Alonzo.

But during the same episode, Showtime resident judge Vice Ganda defended the teachers.

After the commercial gap, Roces explained that she is not criticizing all teachers. She later revealed that she was molested by a teacher, who is now dead.

ABS-CBN OFFICIAL STATEMENT. The statement of Roces caught the ire of many viewers who reacted angrily. Hence, ABS-CBN removed Roces as one of the judges of Showtime. Nevertheless, the MTRCB decided to suspend the show for 20 days.

The MTRCB's move did not sit well with ABS-CBN. In an official statement sent by ABS-CBN Corporate Communications head Bong Osorio to PEP (Philippine Entertainment Portal) earlier tonight, January 11, the Kapamilya network argued that it had already imposed self-regulation by removing Roces as a judge.

"In the spirit of self-regulation, ABS-CBN removed Rosanna Roces as a judge in SHOWTIME after she made statements against the teachers in the January 7 live show. But despite this, MTRCB still imposed a 20-day preventive suspension for the program.

"SHOWTIME is a highly entertaining show watched by many Filipinos. It helps promote and showcase the creativity and talent of kapamilyas nationwide, uplifts their spirit and provides opportunities to improve their lives."

PEP learned that ABS-CBN is planning to make an appeal to lift the suspension. The network was reportedly surprised by the MTRCB's swift decision because they are set to meet on Thursday, Jan. 14, to talk about the issue.

Showtime, hosted by Vhong Navarrro and Anne Curtis, will be temporarily replaced by a new show called Magpasikat, which will feature celebrities showcasing their talents.

PEP also tried get Roces's side through her Facebook account, but we are still waiting for a reply from her as of press time.