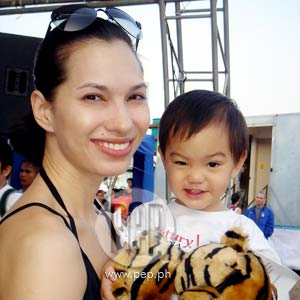 Former actress Nanette Medved enjoys her role as a mother and wife so much that she has no intention of making a showbiz comeback.

Having her own family drastically altered Nanette Medved's outlook and life priorities so much that show business had to take an indefinite backseat.

Trading her showbiz career for a domestic lifestyle was an easy decision, according to the ex-Darna star. Nanette was even more convinced that she made the right choice after giving birth.

"I think that's part of the reason why going back to showbiz, at least for me, is less compelling. Kasi in my case, I'm worried kasi maski na papaano, you know naman that in show business, kahit may intriga o wala, gagawa at gagawa [ng issue] siyempre para mapag-usapan," Nanette, who just arrived with her family from Japan, explained to PEP.

She added, "It's hard for regular families, I mean, there are enough problems and ayoko nang dagdagan, di ba? So, maigi na 'yong ganito."

So preoccupied is Nanette with her role as wife and mom that she can't even keep tabs on the latest local tinseltown happenings.

"Actually, no," she confessed when asked if she updates herself on showbiz news. "I'm so glad... Maigi na 'yong hindi ko alam."