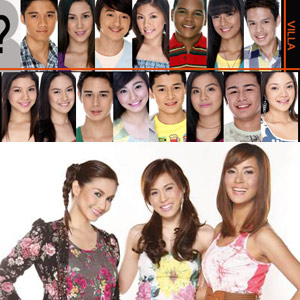 The 15 housemates were introduced to the public by PBB hosts (from left, bottom frame) Mariel Rodriguez, Toni Gonzaga and Bianca Gonzales.

The housemates were assigned to live in either the luxurious Villa or the simple Apartment. As a housewarming gift, Big Brother gave comforters to the housemates in the Villa and a banig to each housemate in the Apartment for their sleeping mat.

Big Brother usually has 16 housemates in one season, but last night, April 10, only 15 were introduced to the public. One more slot is left for either the Dependent Darling or the Courageous Lakan.

It turns out that doctors raised concerns about the medical condition of the Dependent Darling, a girl from Central Visayas. For this reason, Big Brother postponed revealing the identity of the 16th housemate. This Sunday, April 11, Big Brother will announce whether she will be allowed to enter his house or if he will choose the Courageous Lakan, a boy who also hails from the Visayas.

For their first special task, Big Brother told the housemates that they would all have to match the names of their rival housemates with their respective photos. If anyone commits a mistake, the whole house will have to choose a housemate to be evicted next week.