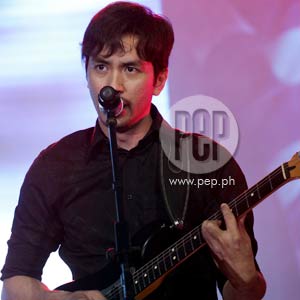 At the launching of PLDT SME Nation's "Bossing Ako" campaign held at the NBC Tent in Taguig City last June 10, the former Rivermaya frontman expressed excitement about appearing in a primetime program with John Lloyd Cruz and Angel Locsin.

Rico is not entirely new when it comes to acting. The prolific songsmith appeared in the independent movie Nasaan si Francis (2006) and had a few television guestings in between. He also acted as Judas in the local production of Jesus Christ Superstar staged at the Music Museum and 70s Bistro in 2000 and 2001, respectively.

Rico likened acting to singing and performing in the sense that it allows him to stretch his innate artistry.

Acting, like his other art-related endeavors, is also just a fun hobby and not entirely a way of existence for the rock icon. When Rico emerged from a sabbatical following his departure from Rivermaya in the summer of 2007, he admitted that the long break allowed him to properly sort out life priorities and that being a musician is just one aspect of it all.

MAKING WAVES ABROAD. The commercial and critical success of Your Universe, Rico's debut album as a solo artist, encouraged Warner Music Philippines to release the record in Southeast Asia.

Rico said that the warm reception of some of his album singles from the foreign listeners and radio stations came as an unexpected surprise.

"It's a thrill, I'll be honest," he smiled. "It's something that I probably wished for once in a while back in the early days of being in the music scene na sana meron akong song na napapatugtog sa ibang bansa. So, nung medyo relax na 'ko and I'm not really after it, it just happens kaya I'm very thankful."

A follow-up album, according to Rico, is certain although details are yet to be properly discussed, given the hectic schedule brought mainly by the album's success.

"I think I said last year that there's gonna be a new album this year," said Rico. "But things have changed and looks like wala pang next album. But there will always be new songs. I'll always come up with singles, hindi mawawala 'yon."