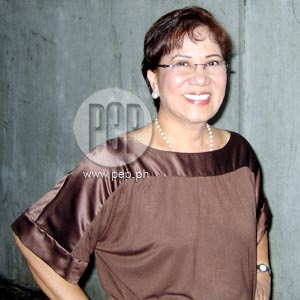 In her 40-page civil complaint filed on March 17, 2009, Galvante said she filed the P7-million civil case after Rama harassed and threatened her through text messages and media interviews. Rama had threatened her by saying she will get revenge, Galvante added. (CLICK HERE to read related story.)

The threats reportedly resulted from an incident in February 2009, when Galvante had a conversation with actor JC de Vera, Rama's talent, in her office in GMA-7.

In several media interviews, Rama accused Galvante of badmouthing her in front of the actor during the short meeting. However, the GMA-7 executive denied this accusation. (CLICK HERE to read related story.)

(In response, Rama filed a P25-million grave slander case against Galvante. The case's dismissal has recently been reversed by the Department of Justice.)

TESTIMONY. Galvante and her lawyer, Atty. Alfred Villamor, arrived at Branch 215 of the Quezon City Hall of Justice at around 3 p.m. Atty. Agnes Maranan, on the other hand, represented Rama.

Galvante started her testimony by describing her work in GMA-7. The network's SVP for Entertainment told the court she is "directly in charge of all productions for all channels of all production units... and all the talents commissioned" for all projects.

Next, Galvante described the incident that led to the case.

On February 16, 2009, Galvante narrated, she had a short conversation with actor JC de Vera, Rama's talent, in her office in GMA-7.

De Vera had the conversation with the top executive after he learned that Rama was pulling him out of his new show Obra, which had just finished its story conference that afternoon in the network's Concept Room on the seventh floor. Galvante said the actor cried after learning about his manager's decision.

Because of the actor's visible breakdown, GMA-7 executives Redgie Magno, Marivin Arayata, and Lilybeth Rasonable, who were present on the same floor, decided to bring him to Galvante's office, which was adjacent to the Concept Room.

Galvante said it was her request to have the actor brought to her office.

Galvante said it was Arayata who informed her that De Vera cried because "pinull-out siya ni Tita Annabelle sa Obra."

"She left, and JC was brought inside my office by Redgie and Lilybeth," Galvante continued. "I asked him to sit down. He was visibly crying."

Galvante said no one was in the room with her and JC while they were talking. She said De Vera's first words to her were, "'Pasensiya na po kayo, hiyang-hiya na po ako sa nangyari.'"

Galvante said she told De Vera she received a text message from his manager. She claimed, however, that she did not read the message to De Vera.

She also asked De Vera how Rama could have known they were talking in her office.

"She was not in the seventh floor," Galvante recalled. "No one was in the room with us. He was not communicating with her, and I did not read the message to him."

Galvante told the court, "Of course, I was surprised. It was not even five minutes, and I received a message!"

Galvante said Moreno told her that Noel was informing Rama about the short meeting.

She had to the end the meeting then. "We all stood up already, and then I said, 'Okay, tapos na 'to.' And then I handed him my business card. I told him, 'If you have a problem with any show, text or call me.'

"Then he made beso-beso to everybody, and he stepped out," ended Galvante.

RAMA'S VERSION. Annabelle Rama told the press last year that she does not believe Galvante's version of the incident.

MEDIA INTERVIEWS. Continuing her testimony, Galvante said she continued to receive threatening text messages from Rama after the meeting. Rama would also berate her through interviews with the media, Galvante said.

"It was being blown out of proportion. So many things were being said," she told the court. "It is troubling, getting in the way of my work, eating my time..."

Galvante also brought several newspaper clippings of Rama's interviews that she said were putting her in a bad light.

She also read four other clippings from several other tabloids, which had the same content.

After this, the judge adjourned the hearing for "lack of material time." Galvante's testimony will be continued on June 25.

WRITERS TO TESTIFY. In an interview after the hearing, Atty. Alfred Villamor, legal counsel for Galvante, told PEP (Philippine Entertainment Portal) they expect that the executive will finish her testimony next week.

Atty. Villamor also added that they still have to present whole copies of newspapers, and not just the clippings.

"We will ask the writers of the articles to testify," he told PEP.

PEP called Atty. Maranan today, June 21, to get a statement from her camp. She said, however, that it is not yet the proper time to voice out their camp's reaction to Galvante's testimony. "Her testimony is not yet finished," she said.